As goes the euro, so goes European unity

Should Germans get veto power over Spanish or Greek budget decisions? Haven't we seen this movie before? 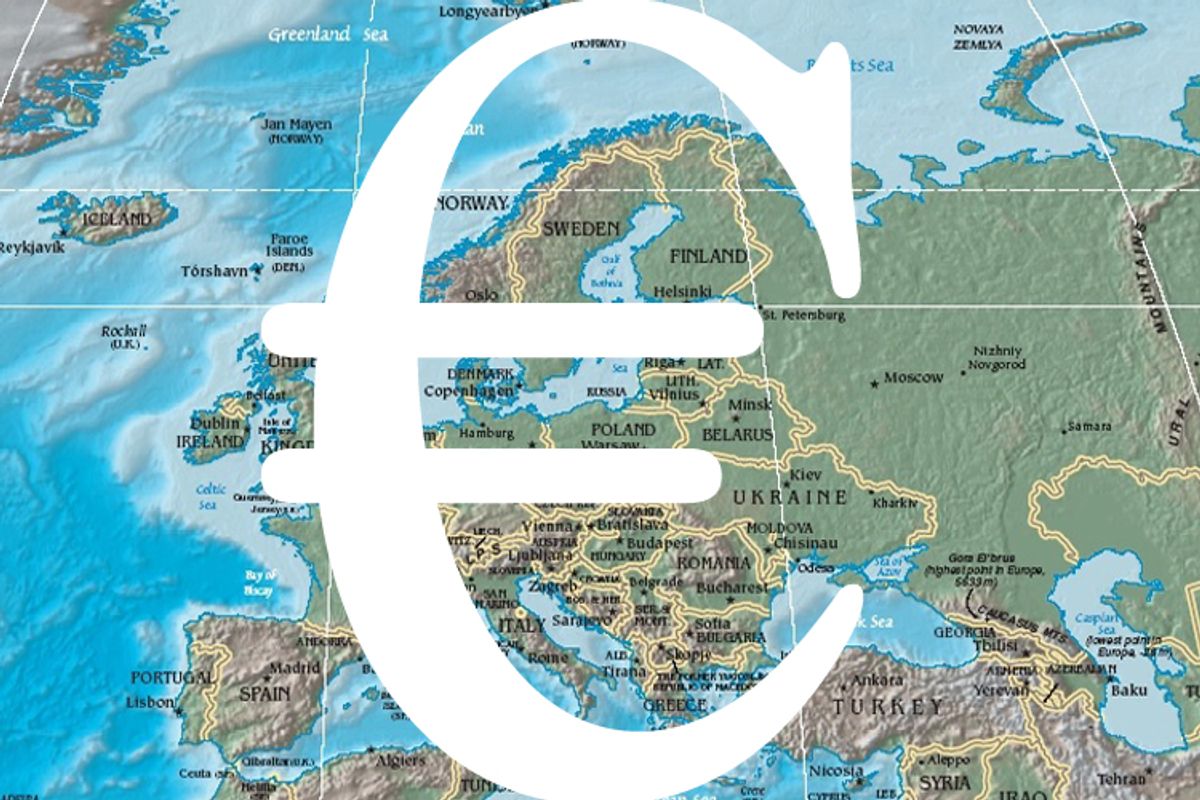 Monday morning, the euro had fallen to a four-year-low against the dollar, the Dow was headed down to an intra-day drop of 180 points, nervous chatter over credit market spreads widening was increasing, and the fate of the eurozone was, once again, in serious question. But by Monday evening, the euro was off its low, the Dow ended in positive territory, and the great project of European integration was once again back on track.

When the future prospects of a decades-long experiment in meta-national political and economic union fluctuate hour to hour based on the value of the euro and credit default swaps written against Greek or Spanish or Portuguese government bonds, you know you live in interesting times. But I certainly don't know what to think. On the one hand, Paul Krugman's observation that wages in some of the southern European countries must fall by 20 to 30 percent relative to Germany (to compensate for the fact that a common currency prohibits them from deflating their domestic currency) seems to spell death for the eurozone. Yet, on the other hand, here's Bloomberg quoting Goldman Sachs chief economist Jim O'Neill's assumption that politics will trump economics.

"The simple misconception is people trying to equate pure economic logic with social political reality," O'Neill said in an interview from his office in London today. "The Germans and French are passionately committed to it whether the rest of us think it's crazy or not."

"It" being European integration, although I suspect that the general public is less excited about making the necessary sacrifices to keep the eurozone going than the elites to whom O'Neill is presumably referring. For example, I continue to find it nearly inconceivable that Spaniards will accept such huge wage cuts willingly. The political pressure to withdraw from the eurozone would seem guaranteed to rise abruptly. But according to the president of the European Central Bank, Jean-Claude Trichet, in a Der Spiegel interview, leaving the "euro area" is simply not an option.

SPIEGEL: Would it not be good if a country such as Greece were able to leave the euro area?

Trichet: No. This is excluded. If a country joins the euro area, it shares a common destiny with the other members. There is a need for a quantum leap in the governance of the euro area. There need to be major improvements to prevent bad behavior, to ensure effective implementation of the recommendations made by "peers" and to ensure real and effective sanctions in case of breaches (of the Stability and Growth Pact).

Barry Eichengreen has a nice summary of the kinds of things Europe needs to do to make the eurozone work. But basically, "a quantum leap in governance" really boils down to the brute reality that members of the eurozone will not be able to conduct fiscal policy as they see fit if their actions transgress against the requirements of the Stability and Growth Pact. Another way to interpret this is to say that countries paying for the current bailout will get to tell the recipients of their largess how to manage their affairs. So Germany, for example, would get effective veto power over Spanish or Greek budget decisions.

Trichet told Der Spiegel that "it is clear that since September 2008 we have been facing the most difficult situation since the Second World War -- perhaps even since the First World War."

And what did those two European catastrophes have in common? Germany attempting to tell the rest of Europe what to do...