If the Connecticut Senate candidate doesn't survive, who will replace him? Hint: It won't be Chris Dodd 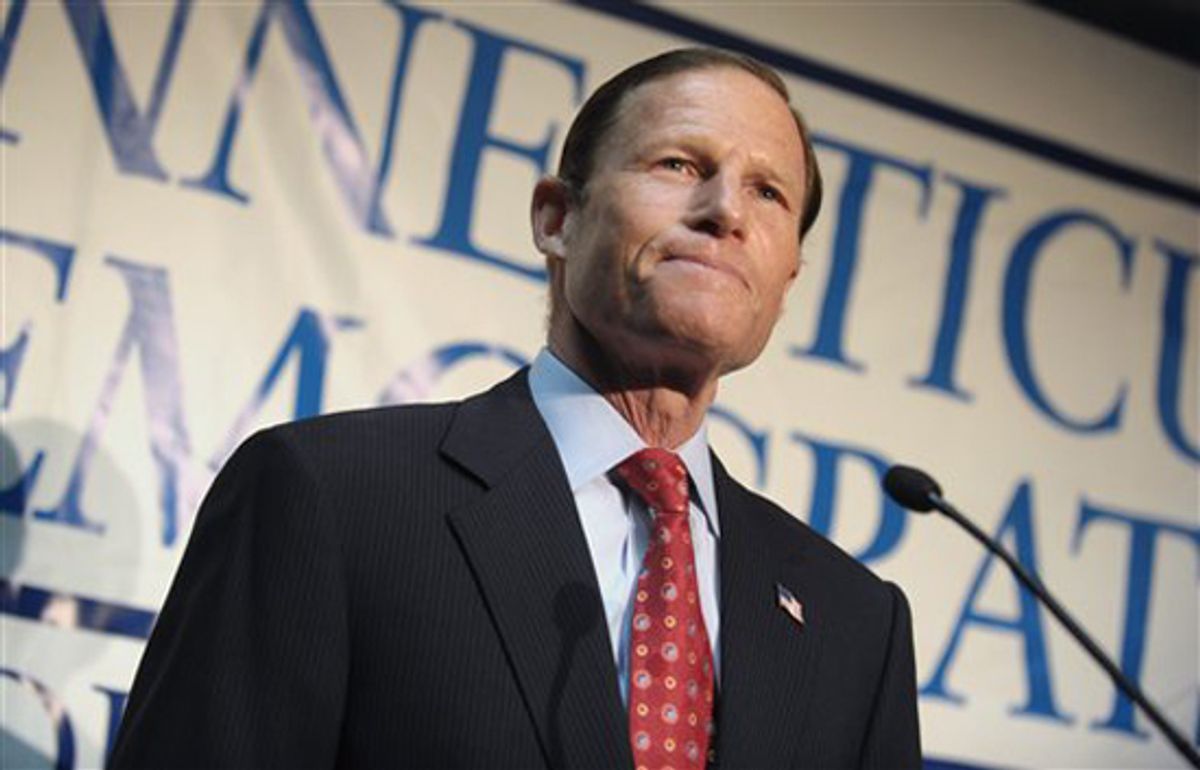 Richard Blumenthal will hold a press conference this afternoon to defend himself against a New York Times report that questioned his military service claims.

The story's publication has raised concerns among national Democrats that a seat that essentially represents their Senate majority's last line of defense might suddenly be in play. It has also sparked chatter that Blumenthal, himself recruited into the race to replace a doomed Democratic standard-bearer (Chris Dodd), might end up dropping out.

Here are five things to watch as the story unfolds:

1. Will another shoe drop? Right now, it appears that Blumenthal can mount a decent defense. Others have stepped forward to say that he's accurately described his military record in the past. If it looks like he's guilty only of misspeaking once or twice (or of getting a little carried away once or twice, sort of like Hillary Clinton's Tuzla airport story), then Blumenthal's support within his party should be safe -- and his gigantic lead in the polls should be more than enough to cushion whatever hit he takes with the general public. But if more examples of apparent embellishment emerge and a pattern takes shape, the fallout will be severe.

2. The convention: Connecticut's Democratic convention takes place this weekend. Blumenthal faces a challenge from Merrick Alpert, a little-known businessman who originally entered the race when Dodd was still in it. To qualify for the August primary ballot, candidates need to secure 15 percent support from delegates.

Before today, no one expected Alpert to meet this threshold. His campaign against Dodd left a bitter taste with some, but the main factor is Blumenthal's immense popularity with the party regulars who will populate the convention. He's been the attorney general for 20 years and has been relentlessly attentive to local party activists and organizations. They will be sympathetic to his defense, especially since it appears that he accurately characterized his military record on multiple occasions.

The consensus is that it would take more revelations between now and Friday (when the Senate race will be taken up at the convention) to prompt delegates to switch to Alpert and qualify him for the ballot. If Alpert fails to meet the threshold, he could still theoretically petition his way onto the primary ballot.

3. The first poll: Democratic leaders in Washington and Connecticut will pay close attention to the first gauge of Blumenthal's public standing after this firestorm. It's one thing to get the benefit of the doubt from party regulars, but will the general public buy his explanation? Or will, in a year of intense voter anger, even the whiff of suspicion be enough to turn them against him?

In a mid-March poll, Blumenthal crushed Linda McMahon, currently the most likely GOP nominee, by 33 points. If his lead is still in that ballpark after the public has absorbed this week's news, then Blumenthal should be home free (assuming there are no further revelations). But a significant cut in that lead in the next week or two would make Democrats very nervous -- and any further erosion after that would send them into a panic.

4. Other options: Remember that Blumenthal was supposed to be his party's insurance policy. When Dodd's poll numbers collapsed, party leaders were anxious to swap him out for Blumenthal, who'd racked up enviable popularity as A.G. But do they have an insurance policy for their insurance policy?

If there does end up being a replacement for Blumenthal, two things seem certain: 1) It won't be Alpert, even if he qualifies for the primary ballot; and 2) the replacement will only step forward after Blumenthal steps out; no Democratic heavyweight will enter the primary against him. It's hard to see Blumenthal exiting the race, of course. But if it ends up looking like he can't win, there will be pressure from his party's leaders to do so.

There is no obvious replacement candidate. Rep. Chris Murphy, an ambitious second-term Democrat, hasn't done much to hide his desire for a Senate promotion. Surely, he'd seek to succeed Blumenthal on the ballot. But he'd have competition from his House colleagues. Rosa DeLauro, who has been in the House since 1991, also wouldn’t mind being in the Senate -- and is said to be irked by Murphy's aggressive maneuvering. Joe Courtney, who beat Simmons in '06 for a seat representing the state's eastern half, might be interested, too -- and would have appeal for the party's progressive base. And John Larson, now the No. 4 Democrat in the House, would also be in the mix.

Dodd's name has also been mentioned in some corners. Might he now rethink his decision to get out? Uh, no. Even if Blumenthal were to become radioactive, Dodd still wouldn't be an attractive option for Democrats, given his awful (and seemingly irreversible) poll numbers. And Dodd (who vowed to stand by Blumenthal today) knows this: It's why he dropped out of the race. Nothing has happened since then to make Dodd more electable. (But, interestingly, the presidency of the University of Connecticut has unexpectedly opened, and Dodd may end up pursuing it.)

5. Blumenthal's reaction: Those who know him describe Blumenthal as unusually sensitive to criticism, especially in the media. He has, they say, labored intensely through the years to insulate himself from exactly the kind of story the Times just published. Even if there are no further revelations of apparent embellishment, Blumenthal is in for a rough ride from the press for the next week -- at least. He's never dealt with anything like this before. How will he react?