It's the Senate at its finest: Everyone gets to vote for a compromise that sounds good but does nothing 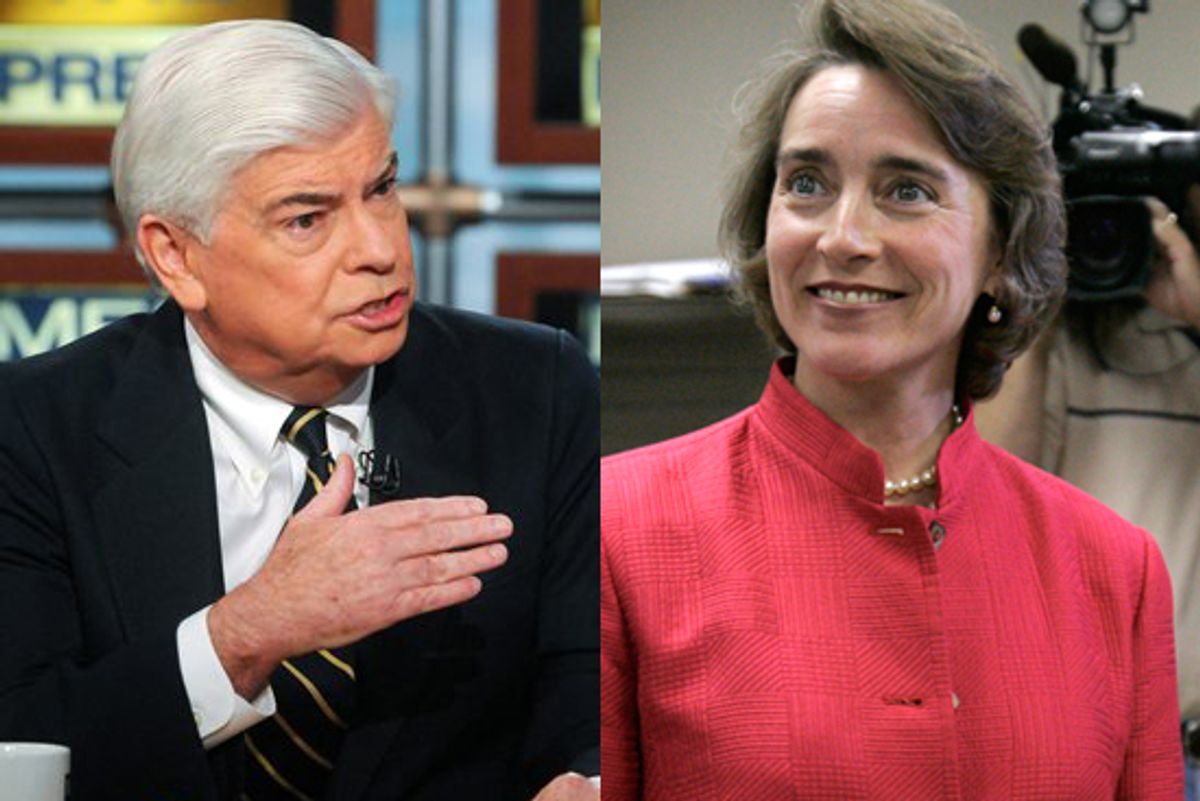 In this provided by NBC Sunday, April 25, 2010, Sen. Chris Dodd, D-Conn., appears on "Meet the Press" in Washington, Sunday, April 25, 2010. Dodd, chairman of the Senate Banking, Housing and Urban Affairs Committee, who drafted the financial overhaul bill, said he hoped at least one or two Republicans would vote Monday with Democrats on beginning debate on the bill. He said he held out hope a deal could be struck in the coming days. (AP Photo/Meet the Press, William B. Plowman) MANDATORY CREDIT: MEET THE PRESS. NO SALES. NO ARCHIVES (William B. Plowman)
--

Here's Chris Dodd's face-saving solution to the Blanche Lincoln derivatives reform pickle: say we'll still ban banks from trading derivatives, but not until after a "review" by a council of regulators. And then, in two years, we kill the whole thing and pretend it never happened. Everyone wins! (In the traditional US Senate sense of everyone winning, which means no one has to take a tough vote and nothing is accomplished.)

Polls in Arkansas don't close until 8:30 pm ET, but most observers are already predicting that a June 8 runoff election between Senator Blanche Lincoln and challenger Bill Halter will be necessary. Meanwhile, Lincoln's left-pleasing derivatives-regulating amendment to the Senate bank overhaul bill was supposed to bolster her support with the Democratic base, so it couldn't be killed until she won or lost her primary.

The big problem with it the derivatives ban was that it attracted a lot of support, but not from the right people. Senators on the left and right liked it, and the unwashed masses seemed on board, but the Serious Adults who allowed this crisis to happen in the first place and who are also all still in charge of everything all thought it was a bit much.

It looks like Chris Dodd came up with the compromise, which is brilliant in its simplicity. Everyone gets to vote "for" the "ban" without worrying about the ban ever happening, because the council of regulators who'll study the ban before implementing it is made up entirely of people who are opposed to the proposal. The council will even be chaired by Treasury Secretary Tim Geithner, who will have final say about whether to enforce the ban. (Hint: he will decide not to.)