American capitalism 6.0: The search for a new model

The form of capitalism the U.S. has pursued for three decades has been discredited. What's next? 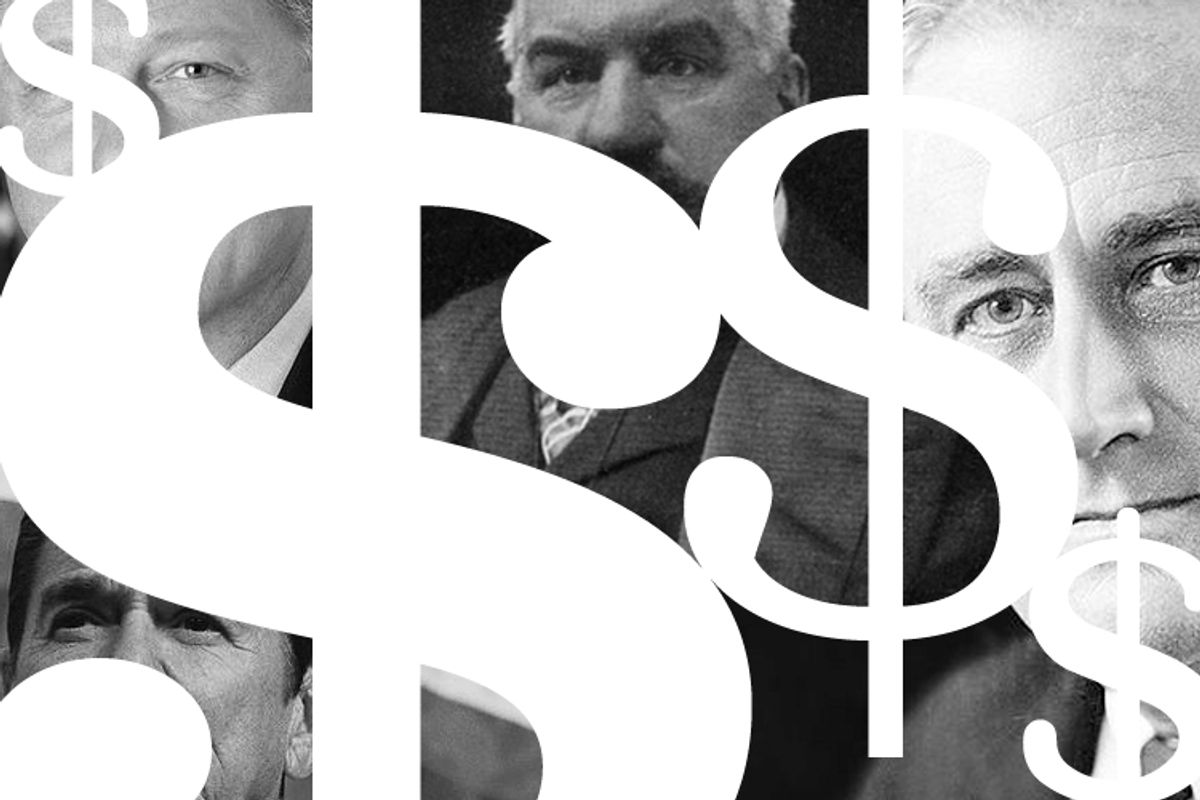 What a difference a global economic collapse makes. Only a decade ago in the 1990s, many opinion leaders proclaimed the triumph of the American model of capitalism. The end of the Cold War replaced the battle of capitalism and communism with a battle of capitalism against capitalism. In the late 1980s and early '90s, different schools offered different models of modern capitalist society as alternatives to the deregulated, free-market model of Reagan and Clinton, Thatcher and Blair: the universal social democratic welfare state of Scandinavia, or the "social market" of Germany, or Japanese industrial policy. But then Japan stagnated after its bubble economy popped and Germany suffered from acute indigestion after swallowing the former communist East. The winner was declared, at least by Americans, to be American-style capitalism.

That was then. Today, it is safe to say, very few people in other countries look to the U.S. for lessons in how to organize industry and finance. No country in Asia or Europe would want to emulate a bloated, out-of-control, economy-wrecking financial sector like Wall Street or a manufacturing sector as dysfunctional as Detroit. Following the poisoning of the global economy by toxic waste manufactured in the U.S. financial sector, a puzzled world watched as U.S. healthcare reform failed to provide American citizens with the universal, lower-cost healthcare that other industrial nations take for granted. Unable to find anything else to brag about, American triumphalists are reduced to boasting that the U.S. population will continue to grow rapidly, thanks to the kind of low-skilled, low-wage immigration that other industrial countries neither want nor need.

Once upon a time, the combination of U.S. venture capital and R&D were supposed to lead the human race into a new era with a dynamic new economy free from inflation and business cycles. But as the economist Michael Mandel has noted, the promise of new technological breakthroughs has not panned out. He argues that we are in an innovation drought. Meanwhile, more and more Silicon Valley firms are outsourcing R&D, when they are not claiming that they need even more underpaid, highly educated indentured servants on the grounds that, unlike the high-tech companies of China and India and Japan, they can’t be expected to hire and train their own fellow citizens. For the past decade, job growth in the U.S. has been almost entirely in the sectors of health, education and government. So much for the millions of jobs that IT was supposed to create in America for the computer-savvy “creative class” of Robert Reich and Richard Florida.

Some have suggested that the capitalism vs. capitalism debate is being revived. This time American-style liberal capitalism will be pitted against what Ian Bremmer calls "state capitalism" and Stefan Halper calls "the Beijing Consensus." Anatole Kaletsky predicts what he calls Capitalism 4.0. But the idea that we are on the verge of a new global ideological struggle over rival forms of industrial capitalism is mistaken, for two reasons.

To begin with, there is no reason for either established economic powers like Japan and Germany or rising economies like India and Brazil to choose between Chinese Market Leninism and American Market Fundamentalism. In the last generation, the countries of Europe, Asia and Latin America and other regions have somewhat liberalized their policies in areas from trade to corporate governance. But the countries of the world were never going to converge on a single model, even before the Great Recession discredited the free-market extremism of the U.S. and Britain. In the future, as in the past, countries will adopt or reject economic ideas from other countries, without necessarily abandoning their own traditions.

American capitalism 1.0 has been described by historians as the mixed enterprise system. Before the Civil War, most large-scale enterprises in the U.S. were chartered by state governments to provide infrastructure: first roads and canals and bridges, and later railroads. Sometimes these were mixed public-private companies in which state governments owned shares.

American capitalism 2.0 was entrepreneurial capitalism. Its heyday was from the Civil War until the end of the 19th century. The first big business in the U.S. was the railroad industry, and America’s railroads were built by the robber barons of American folklore, who were as ruthless in suppressing their workers and bribing legislatures as they were in battling one another.

During the Depression, the New Deal Congress passed the Glass-Steagall Act and other laws to separate investment banking from commercial banking and separate banking from industry. The result was managerial capitalism, or American capitalism 4.0. The great corporations were now governed by managers, not by finance capitalists or founding families. During and after World War II, the violent wars between capital and labor were replaced by an uneasy truce.

Managerial capitalism was the system that was in place during the Golden Age from the 1950s until the 1970s, a time of sustained growth that was free from extreme cycles of boom and bust. But American management and labor alike, having taken U.S. economic primacy for granted, struggled to compete in the 1970s when West Germany and Japan revived as industrial rivals. The truce between employers and unions broke down as American business, beset by foreign competition and stagflation (combined inflation and stagnation) tried to increase its profits by smashing organized labor and outsourcing production.

A wave of deregulation of industry and finance that began under Jimmy Carter inaugurated the most recent era. American capitalism 5.0 could be described as financial market capitalism. While multinationals outsourced first their production and then, increasingly, their R&D to Asia, Wall Street middlemen found new ways to enrich themselves without contributing to the productive economy. China’s policy of buying dollar-denominated securities to keep its currency artificially low in the interest of its export industries allowed interest rates to remain low in the U.S. That, in turn, enabled Americans to borrow to go shopping or gamble in stocks, bonds and real estates, taking part in a Ponzi scheme that crashed in the fall of 2008.

The false prosperity of the Reagan-to-George W. Bush years was rationalized by academic and pop economists who claimed that the U.S. had discovered the secret to perpetual non-inflationary growth. It was a very odd formula for national prosperity: outsource manufacturing, import unskilled, low-wage workers for the construction and menial service industries, and devote an ever-growing share of national GDP to bonuses for Wall Street traders making complex bets with the help of computer programs. But at a time when financial sector money was flowing into politics, journalism and the universities, it was the rare politician, journalist or academic who was willing to ask questions. Progressive activists who averted their eyes from what was happening in the economy and focused on non-economic issues like the environment and civil rights and foreign policy found fundraising to be much easier.

At the center of the short-lived American Capitalism 5.0 model was the notion of shareholder value. Instead of being treated as social institutions chartered by government to carry out important functions in the economy, corporations were treated as the purely private property of shareholders. And in the absence of other measures to indicate the approval or disapproval of thousands or millions of mostly anonymous shareholders, stock and bond prices were treated as the measure of success or failure. Corporate executives who were compensated with stock options had a personal incentive to do whatever it took to crank up share prices. If that meant producing a superior product at a lower price while paying good wages to American workers, fine. If it meant transferring production to a foreign police state with low-wage labor while laying off the U.S. workforce, or breaking up the company and auctioning off its assets to the highest bidder, well, that was OK, too, if share prices went up.

While the drive to maximize shareholder value was damaging to American manufacturing, it was fatal to American banking. In the New Deal era from the 1940s to the 1970s, financial crises in the U.S. were uncommon in large part because of the way that the financial industry was organized. Restraints on interstate and even intrastate banking meant that bank executives did not fear hostile takeovers if their share prices went down. And investment banks until the late 20th century were organized as partnerships, not corporations with limited liability. The fact that the partners themselves were responsible for any losses made investment bankers cautious.

Reaganites and Clintonites collaborated in dismantling the system in the 1980s and 1990s. The elimination of restraints on branch banking led to mergers and rewarded a new kind of empire-building mentality in the formerly unambitious banking profession. The investment banks mutated from partnerships into corporations, so that their staff could enjoy the benefits of limited liability if they screwed up. (This was before Goldman Sachs became a bank holding company, in order to be rescued by the federal government).

If American Capitalism 5.0 had a single fundamental flaw, it is this: it treated industries and banks as mere commodities, like apples or oranges. Outside of the English-speaking world, nobody thinks of industries and banks as commodities. In other societies, flourishing industries are considered to be essential to national military security and communal prosperity. And banks are considered to be public utilities, not gambling parlors on Mississippi riverboats tethered to a particular country by the thinnest of ropes.

From the wreckage of American Capitalism 5.0, a new 6.0 model will emerge. It will take time. Despite the best efforts of progressive reformers, to date President Obama and the Democratic majority in Congress have supported Version 5.1 -- a slightly modified variant of the unsustainable system that produced the present disaster. For its part, the Republican right, with its diatribes against the legacy of the New Deal, seems to want the American economy to revert to Capitalism 3.0 -- the finance capitalism of J. P. Morgan -- or even 2.0 -- the robber-baron capitalism of Jay Gould and Leland Stanford.

In designing the next American capitalism, we should not hesitate to steal good ideas from other countries -- even France. But we can also learn from our own history. The failed Reagan-Clinton version of American capitalism was just one of half a dozen models that we Americans have tried and discarded. As methods of organizing production in the real economy, there have always been alternatives in the U.S. to the shareholder-obsessed corporation, including somewhat exotic ones like producer cooperatives and public-private hybrids. The U.S. had a banking system only a few decades ago that was an appropriately dull utility. The U.S. even had a public banking system, in the form of the U.S. postal savings bank, which was abolished in the 1960s but perhaps should be revived.

Rejecting the failed model of American Capitalism 5.0 will not make us less American. Capitalism 6.0 will be just as American as its predecessors, but it will be better than what we have today. It could not possibly be worse.

Michael Lind is policy director of the economic growth program at the New America Foundation and author of "The American Way of Strategy."