How Miss USA will push the secret Muslim agenda

A leaked memo confirms a nefarious plot to infiltrate America using the one weapon we can't resist: Total hotness 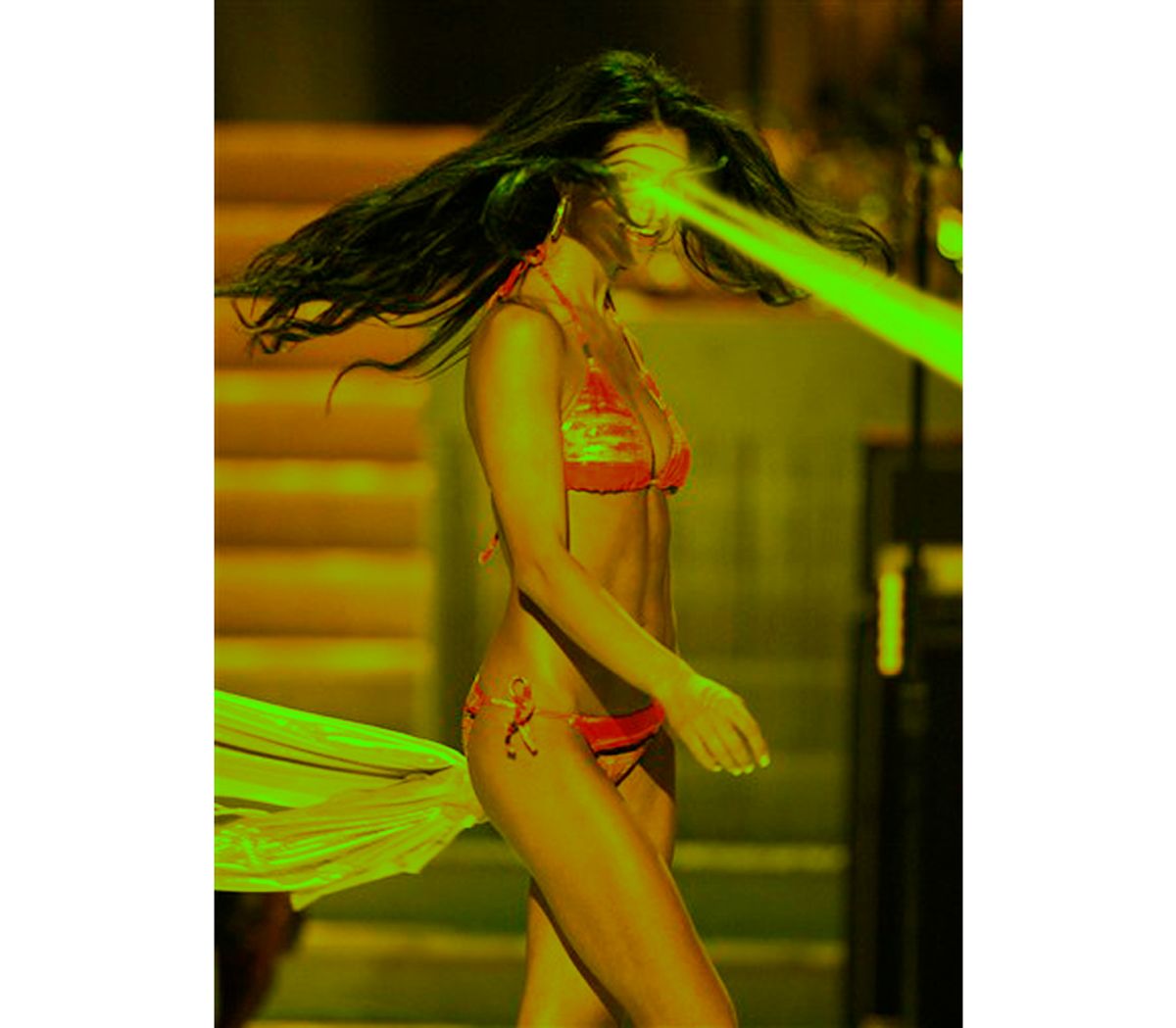 To: The Muslim World

Re: "The Muslim Agenda: Or, How to Infiltrate America by Learning to Love Ridiculously Good Looking People in The Miss USA Pageant"

This is a transcription and translation of a meeting recently held in Arizona, U.S.A, the global headquarters for Evil Muslims Worldwide, Inc.™ Several evil dignitaries were present either in person or via Skype. Their identities have been protected.

A bearded man of average height and brownish hue dismounts his distinguished, but very evil, camel and proceeds to address the distinguished evil guests in a very evil, foreign language.

Gentleman, our nefarious plots for infiltrating America and creating a "politically correct, Islamo-pandering climate" has yielded mixed results. We need a new strategy.

It seems that our initial plan of violence and intimidation has backfired. Amateurish acts of terrorism in Times Square, failed underwear bombs on airplanes, and the introduction of hummus has done little to curry the favor (Speaker nods to Pakistani Representative) of the American people to our cause.

As you know, we are at the cusp of completely taking over and Islamicizing America. What, with our 0 Muslim Justices on the Supreme Court, 0 Muslim American owners of major media corporations, 2 Muslim American congressmen with impeccable records and high popularity ratings dominating 433 non-Muslim congressmen -- and now Obama as president! (Gives a knowing look to the Kenyan Representative for successfully implementing "The Kenyan Birth Agenda")

Our influential network of covert spies even brainwashed Food Network's Rachael Ray to wear a keffiyeh during her stint as a Dunkin Donuts-monger! We even have News Commentators imagining using falafels and loofahs to sexually harass their young producers! We're at the precipice of creating Sharia USA!

However, we need a game changer.

After spending considerable amounts of money and time performing sophisticated research on Google and sifting through countless pages of pornography (for research purposes only), we have discovered the American people do not cower when confronted with terrorism. Also, many are not inspired by complex discussions on foreign policy, and most are not motivated by intellectual debates concerning global affairs.

However, our research has conclusively shown that all Americans respond positively to one thing: hotness.

The point is, gentleman, that hotness, for lack of a better word, is good. Hotness is right, hotness works. Hotness clarifies, cuts through, and captures the essence of the evolutionary, Islamo-fascism spirit. Hotness, in all of its forms has marked the upward surge of mankind. And hotness, you mark my words, will not only save our "Muslim Agenda," but also that other malfunctioning corporation called the USA. Thank you very much.

I point as Exhibit A this sexy, hot and nude centerfold from Cosmopolitan's 1982 "America's Sexiest Man" issue. This red-blooded, all-American hunk is now a full-time Republican senator. Need I say more?

Everyone claps. Moroccan representative looks around scared and asks, "But how will we use Hotness?"

We will infiltrate and capture America's attention by hijacking one of their most prized institutions: the Miss USA Beauty Pageant.

We have already commenced the production of modern-day "fembots" in a Southern Lebanon Factory funded by Iranian scientists.

Our prototype "fembot" that was originally sent to Wasilla, Alaska, suffered from severe malfunctions that made her preoccupied with moose hunting. Subsequently, she went "rogue." Nonetheless, she achieved her "divide and conquer" objective and tested our hypothesis: that many Americans would listen to the simplistic rantings of a hot, brunette, former beauty pageant winner with great legs and really white teeth. They will even give her millions for a biography written by someone else. She did a great job in helping our Manchurian candidate, Obama, win the office.

Gentleman, it is time for us to evolve. Judging from America's newfound obsession with color and globalization, our next "fembot" will be ... Arab-American!

There is uproar, commotion and excitement. North Korean representative faints.

She will be a sleeper agent during her youth living comfortably in the Middle East. During her teens, she will be sent to infiltrate the USA. She will be "activated" in her early 20s right as she achieves peak, maximum hotness.

She will create confusion and disunity among the American masses with her excellent English, perfect nose, and assimilation into Western culture, but also throw them off-guard with her multisyllabic last name, dark features and Arab roots.

"Can we please make her blond?" asks the Jordanian leader.

No! Conclusive research has shown that for the first time in American history blond-haired, blue-eyed women are marginalized and unpopular. Just look at how the mainstream media oppressed last year's runner-up, Miss California Carrie Prejean, who spoke out against gay marriage and suffered painfully with a lucrative settlement and a book deal!

Moreover, this is the perfect opportunity to hijack "hotness" from white blond women with Christian backgrounds and radicalize it with a brown face.

"Can we hug the beauty pageant?"

Pakistan, we already warned you once! You recall the embarrassment when you tried to hug our first fembot?

Pakistani Ambassador makes a frowny face and twirls his mustache.

Now, we had to choose a country of origin in the Middle East for our fembot, and although all the Arab countries' bids were seriously considered, we've decided to go with … Lebanon!

We've decided in order to successfully infiltrate and destroy the enemy, one must become like the enemy. Our fembot must be able to pass as a liberated, proud Western woman confident and unafraid of her feminine sexuality, but also unwilling to be sexually exploited by men. In order to accomplish this herculean task, she has to master the most intimidating and fearsome obstacle course … the stripper pole.

Yes, the stripper pole, that symbol of female empowerment, must be thoroughly mastered by our fembot. However, we cannot lower our moral standards, so we'll make sure she does it fully clothed -- this will avoid the Vanessa Williams Playboy scandal from the '80s and oppressed Carrie Prejean nude photo scandal from 2009.

Preferably, our fembot will have to win an amateur pole-dancing competition thrown by a juvenile radio station. Photos of this event will have to eventually resurface on a tawdry online entertainment magazine. This is our double-edged sword strategy. Even if our fembot loses the Miss USA competition, she can have a successful and influential career on television by leaking photos on the Internet and becoming a celebrity overnight for no substantive reason aside from gullibility, shamelessness and YouTube. She can infiltrate American youth by Islamicizing the masses through her own reality show, which will inevitably be given to her by E!

In order to upgrade our fembot, we are seeking uranium-enhanced breast implants, nuclear explosive nipples and yellowcake-padded buttocks. Unfortunately, we were unable to secure the necessary materials, so instead we settled on 6-inch stiletto heels and thongs.

However, we can't leave anything to chance! We must ensure success, and to do so, we must align ourselves with our secret operatives who will rig the Miss USA pageant in our favor. That's right -- Mexican Americans and illegal immigrants.

We must court power and influence, and no one is more powerful than the dominant illegal immigrant workforce that holds a near monopoly on the thriving and lucrative "field labor" sector of American economy. Indeed, our evidence shows the depths of their immense power and their sly, subversive strategic plotting. They are so shrewd -- having taken over America -- that they rigged Arizona to create a draconian law that would effectively racially profile them, require them to carry identification at all times, and essentially criminalize their entire existence. They've even banned the study of their own ethnicity and history in some Arizona state schools! Now, that's lateral thinking! And we should give our due respect and props.

If they can rig a state, they can definitely handle a beauty pageant. We will plant a Mexican American judge, preferably an actor on a popular comedy show, who will knock out our closest competition -- a very blond, very white and very "real American" -- by asking a controversial but relevant question about oppressive state laws demonizing immigrants. Our evidence suggests she will answer in favor of Arizona and states' rights, thereby ensuring the liberal media, another agent in our employment, will unleash the p.c. police and further oppress the white Christian minority by silencing their voice and mocking their opinion.

Malaysian ambassador gets up to ask a question. "This is all fine and dandy, but don't you think the surprising frequency of Muslims winning beauty pageant will make some commentators suspect "an odd form of affirmative action." I mean we're talking about six Muslim women around the world -- including our fembot, God willing -- in the past five years!

Malaysia, please, no one could possibly be that dumb.

As the archaic and fossilized vestige of blond, Western decadence succumbs to her political incorrectness and dooms herself, our glorious fembot meanwhile shall rise! She will simultaneously support our president’s socialist agenda as well as plant suggestive, subconscious propaganda in the minds of "real" Americans to stop them from breeding, thereby giving us yet another advantage toward Islamicizing the West!

When asked whether contraceptives should be covered by health insurance, fembot will confidently say yes and assert, "I believe that birth control is just like every other medication even though it's a controlled substance."

When she wins the crown and is asked how she feels, we will remind America that our fembot has assimilated and is "one of them" by programming her to feign nervousness and sincerity when she cryptically answers, "Ask me after I had pizza." However, we all know she secretly wants tabouleh, baba ghanoush and biryani! Ha ha ha!

Everyone laughs. Even North Korea.

And what shall we do on that glorious night that commences our successful infiltration and domination of America with our globalized Muslim, Islamo-pandering agenda? We shall celebrate and laugh at them "from within Dearbornistan's Hezbollah restaurant, La Pita, where [our] workers [will] openly sing Hezbollah war songs and anti-Semitic 'ditties' in the kitchen …where falafel, and hummus, and hate [are] all on the menu."

Iran asks the final question. "But what will we name our Femme Bot?"

She will be named Rima Fakih. And she will be our great Fak-you to all the haters.