How peas got their name, and how they earned my hatred

This week's winner is a fantastic recipe for spicy pea soup with herbs, a linguistic lesson, and a traumatic story 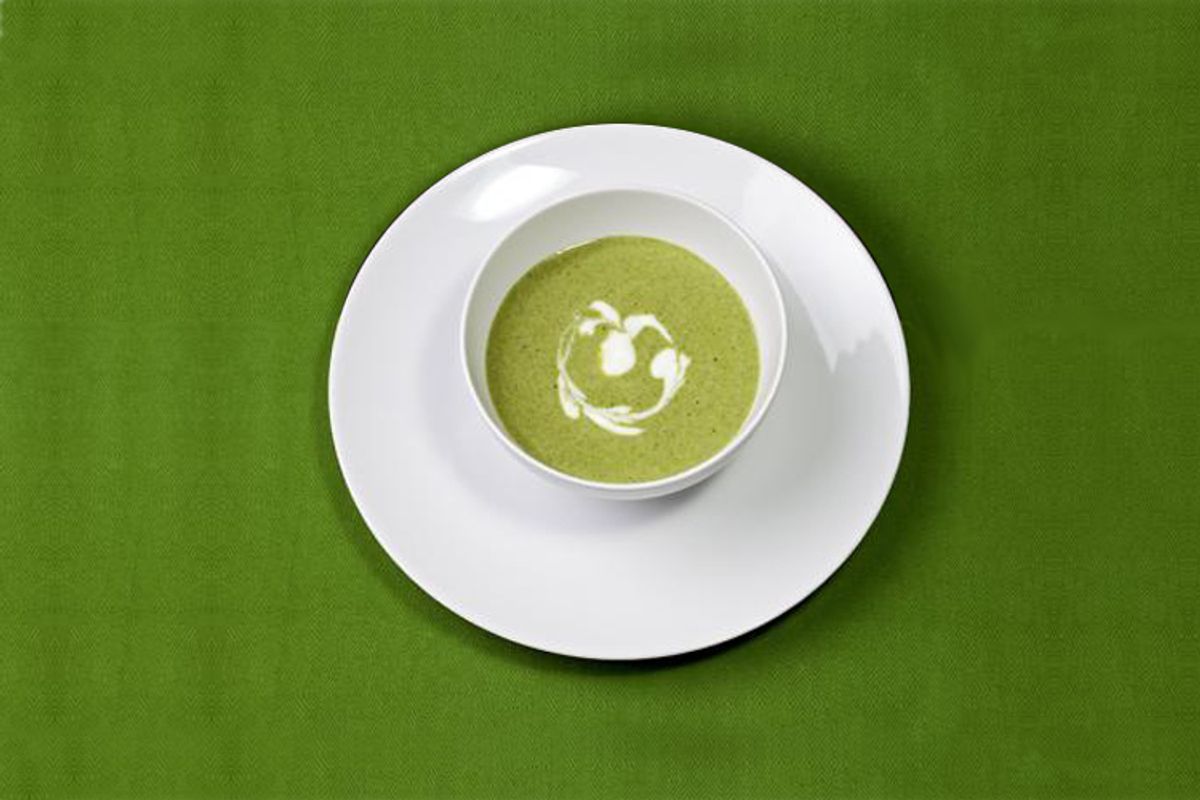 This winning entry for the Salon Kitchen Challenge -- in which we asked readers to share their favorite recipes for peas -- comes to us courtesy of Felicia Lee.

I hate how their tough, wrinkly skins get stuck in my teeth. I hate how their dry, starchy innards squish out of said skins when I bite down on them. And I hate that grassy, muddy taste that recalls lawn clippings. Yes, I know I'm supposed to believe that flavor evokes the very essence of spring, but spring here in north-central Florida sounds like bellowing alligators and smells like muddy grass. So there.

Peas were a major source of trauma in my childhood. I was blessed with caring parents, reasonably cool sisters -- and those little green pellets on my dinner plate at least twice a week. Dinner at our place -- until my youngest sister started school and Mom had the time to invest in a Cuisinart and recreational cooking classes -- usually consisted of Stouffer's lasagna, the occasional roasted duck or soy-marinated chicken from Chinatown, and lots of frozen peas. Peas with frozen lasagna. Peas with (and in!) Stouffer's turkey tetrazzini. Peas with hot dogs. Peas, peas, peas!

My sisters also hated peas. One night, our hatred of peas landed one of them in the emergency room.

This was before our youngest sister was born, and some time close to Christmas. The three of us girls were powering our way through our mandatory portions of green poison when Serena, then the 5-year-old middle kid, had an inspired idea: She picked a pea off her plate and squished it against the tip of her nose. Just as she hoped, it stuck. "Rudolph, the Green-Nosed Reindeer!" she started to sing.

Pam, who was a year younger than Serena and worshiped her every move, squealed in delight, grabbed a pea, aimed it at her own face -- and shoved it squarely up her nose.

"AAIYAH!" Mom screamed. ("AAIYAH!" being Cantonese vernacular for "OMFG!") Both parents jumped up, grabbed Pam by the head, and started staring up her nose as she started to wail. They called our pediatrician at home (this should give an idea of how long ago this was) and he suggested pouring pepper up her nose so she would sneeze it out. The pepper made Pam cry, but it didn't make her sneeze.

Since the pea was too big to move any further back in Pam's nose, we left it there for the night. The next morning, Mom took her to the emergency room, where it was removed in an instant by someone with a pair of long tweezers.

Moral: Peas are dangerous. They can put you in the hospital. What better reason could there be to hate them?

A linguistic fun fact about the word "pea": It formerly didn't exist. Its forebear was the word "pease," which was, in older varieties of English, a mass noun. (Mass nouns are those that refer to things that can't normally be pluralized, such as "oatmeal" or "dirt" or "happiness"). So the "s" sound at the end of "pease" was like the "s" sound at the end of "kiss": not a marker of number, just part of the basic word.

Plurals in Old English used to be formed much as they are in modern German, by either switching out a vowel sound inside a noun (we still do this with very old words in English, such as "tooth/teeth"), or with a suffix "–n" or "-en" (as in "child/children"). After the Norman Invasion, English adopted not only a lot of French vocabulary, but French word-formation strategies -- such as using "-s" as a plural marker. Once this strategy became fully productive in English, people started mistaking that "s" at the end of "pease" for a plural marker, and took "pea" to be its singular form.

So the very existence of "a pea" in English was the result of a mistake.

Which brings me to my recipe: The only pea preparation that didn't repulse me when I was growing up was pea soup -- a dish in which peas revert to their historical etymological status as an uncountable mass. Their leathery skins are blasted into oblivion, and that weird starchy texture is rendered pleasant and velvety. And most important, it's nearly impossible to get stuck up your nose.

This recipe is loosely inspired by the minted sweet pea and spinach soup recipe in the classic Silver Palate cookbook. I added the cilantro because I didn't have enough mint, and because the combination of cilantro and mint reminds me of Thai green curry, the ginger, garlic, chili and fish sauce seemed to follow naturally. They don't make the soup taste spicy or gingery or fishy, just pleasantly savory. And less like peas. Which is a good thing in my book. Because I hate peas.