In preparation for the finale, we look at how the original miniseries stacks up against the imaginative remake 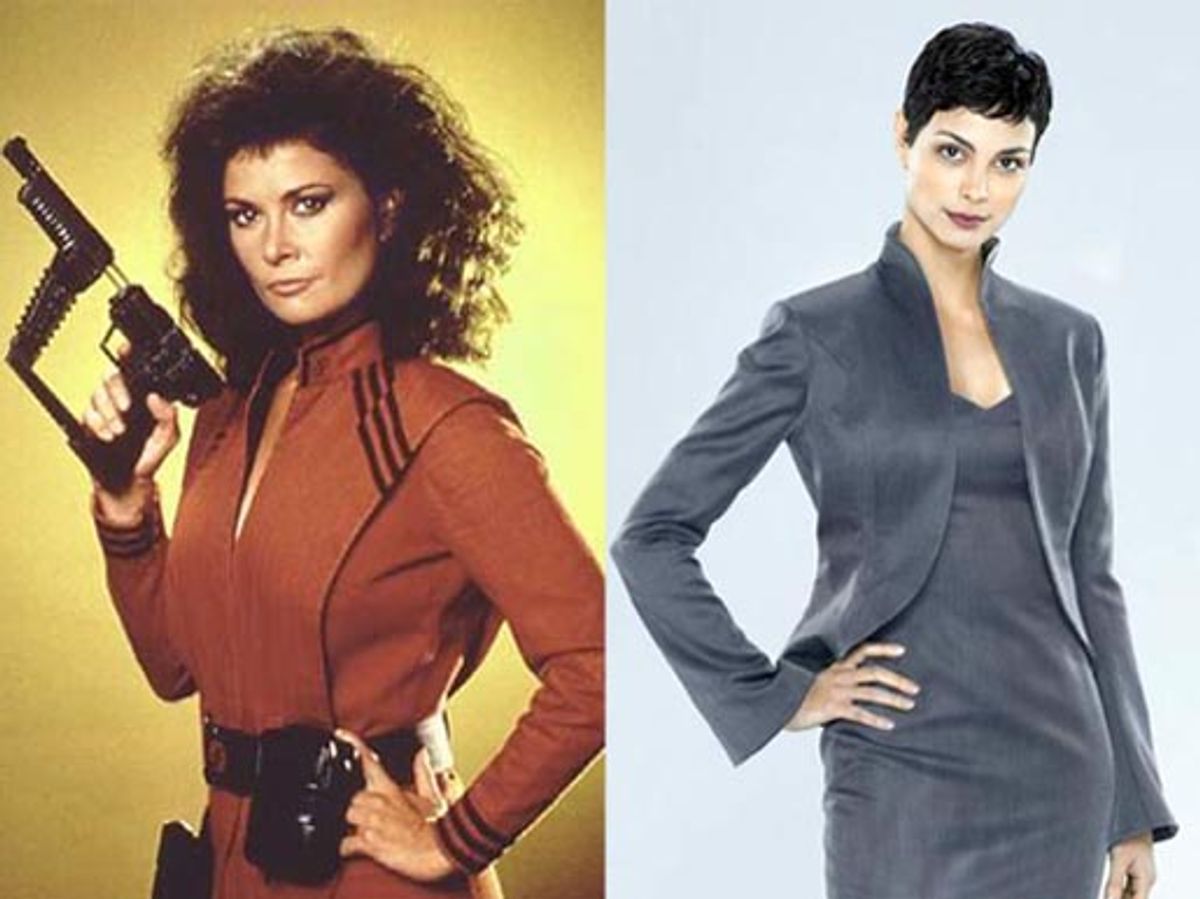 ABC's remake of "V," the science fiction TV classic that enthralled me as a kid in the 1980s, is about to wrap tonight (Tuesday, May 18). Both the original '80s versions -- "V: The Miniseries" and "V: The Final Battle" -- and the imaginative remake, which began in November of 2009, have their distinct charms. Here I've outlined some of the differences.

(Spoilers below for all, so please beware.)

Long story short. Aliens arrive on Earth, looking just like us, choosing names from Earth, calling themselves "Visitors," and offering us friendship and advanced technology in exchange for a few basic Earth materials. Sound good? It isn't. What follows doesn't bode well for the U.S. or the world. And the Visitors, we learn, are not what they appear to be, a point very strongly underscored by their eating habits. Humans band together as a resistance. Some dissenting Visitors form a Fifth Column.

How do some of these elements compare from original to remake? And before I start the discussion, let me say that ABC is commendably making this remake distinct from its predecessor. My point in the comparison is not to say that the current "V" should follow the previous one note for note. Quite the contrary: I very much admire the remake's refusal to reference the original.

The politics. One could argue opposing political viewpoints for both original and remake. "V" 2009 has gotten a lot of press for its sinister allusions to the Obama administration, as Visitor leader Anna arrives offering us all "universal" healthcare (actress Morena Baccarin has said that she studied Obama's speech and mannerisms for the role).

I say this as a liberal supporter of our president, but my advice to ABC is: Run with it. Have fun with it. Make "V" a Tea Partier's worst paranoid fears. The zeitgeist is there for you, and you'd be foolish not to tap into it.

What's even more interesting is that the original "V" had a very strong "liberal" (for lack of a better word) sensibility. Not only was it a thinly veiled allegory for Nazi Germany, right down to an alien glyph that's essentially a swastika, there were even shout-outs to resistance movements in Central America, a hotbed of Reagan-era Soviet and U.S. adventurism in the 1980s.

Of note are the funny and chilling lessons in media and public relations that both shows offer, via the characters of ambitious newscasters Kristine Walsh (1980s) and Chad Decker (2009). The remake is doing this better, taking it to a more devious level. Anna's greatest and most devastating weapon is not some alien doomsday device or laser weapon. It's an expertly managed P.R. campaign.

The resistance. Unfortunately, this is where I think the original vastly outshines its remake. We become engaged in the lives of very normal people who suddenly find themselves faced with a deep crisis and forced to become guerrillas. This gave us an array of characters who are vastly more interesting than the leaden, glossy action-figure leads of the 2009 version of the resistance. The Robert Altman ensemble narrative approach of the '80s version gave us many great character threads to follow, as well as a few unfortunate stereotypes (a black L.A. criminal named Elias and an illegal Mexican worker named Sancho -- and damn if he wouldn't be a topical character now!).

In the '80s, the lovely Faye Grant portrayed Julie Parrish, a medical student who becomes the resistance's leader. She was smart, tough and compassionate, and a female character like that was a rarity in television back then. I'm having more trouble buying into Elizabeth Mitchell's Erica Evans. Of course, you can't talk about "V" without discussing the great Marc Singer (Mike Donovan). He was an action figure too, but a very charming one who captured the show's female fan base and gave the kids the male character to look up to. In 2009 that slot seems to be going to the character of Father Landry, a Thorn Bird-y priest wrestling with all kinds of questions about faith as he's forced to do questionable things as a resistance member. I also miss Michael Ironside's character Ham Tyler, a flinty Reagan-era CIA badass who was there to provide the Rambo/Clint Eastwood vibe. That character in the remake is now a vaguely defined and rather pointless "mercenary."

Perhaps the most important difference I can point out comes via the characters of Abraham and Ruby, two Holocaust survivors living in L.A. who became the heart and soul of the '80s miniseries. A poignant scene shows Abraham teaching some kids  who are spray-painting graffiti in defiance of the Visitors to turn that rebellion into a powerful symbol of hope, reviving the "V for Victory" of World War II.

In 2009, "V" literally stands for "Visitor," so that it becomes shorthand for the aliens themselves.

The aliens. In the 1980s, they were Nazis in bright red jumpsuits and cheap rubber skin disguises, whereas now, they look like a weird Scientology cult in their soothing, dull gray suits, with cloned human flesh disguises. ABC hasn't gone all the way in highlighting the Visitors reptilian natures, but there is one thing we do know: This new batch of Visitors lack normal human emotional response. Anna believes empathy and compassion to be threats to her rule. It's suggested that while they don't have an innate capability for emotion, it develops through contact with humans. Anna also keeps her people hooked on some kind of telepathic religious crack called "The Bliss." There's a lot of material out there on the R-Cortex or "reptilian brain" and sociopathic behavior.

But the 1980s Visitors are capable of a full range of human emotion and behavior. Their history of atrocities and political development parallels ours. They may have faster than light space travel, but they still maintain all the horrors and flaws and empathy and kindness that people on Earth have.

I'm not sure which is the more relevant lesson (if there needs to be a lesson at all).

And what about the dissenting Fifth Column? The original had the affable conscientious dissenter Martin, who risked life and limb for a noble higher purpose. The remake's Fifth Column, we're told, is rebelling because they somehow discovered human emotion. There's Morris Chestnut's sleeper agent Ryan Nichols, a very attractive man who has now fathered a hybrid baby with his human girlfriend, and who is a great action hero character, but I can't for the life of me think of him as an alien, even when we're told at great lengths that he is.

The Lizard Queen. And, finally, how could we not talk about the über-dragonesses of both series, Jane Badler's Diana and Morena Baccarin's Anna? Jane Badler was fantastic as the ruthless and imperious Diana. It strikes me that viewers probably enjoyed her hair drama, her shoulder pads, her catty feuds with other female Visitor commanders -- essentially, she was Joan Collins as a Nazi she-lizard from outer space.

Anna, though, is the chief reason to watch the remake. She's brilliantly realized by the gorgeous Morena Baccarin, who expertly and subtly telegraphs Anna's creepy sociopathic reptilian nature to the viewer.

Both characters brought forth each series' most memorable WTF moments. There's, of course, Diana's midnight snack, a very talked-about moment, and Anna's praying mantis scene. But the latter doesn't even begin to compare with this unspeakably disturbing bit. If Diana was the Joan Collins space lizard, Anna is the Joan Crawford space lizard!