In defense of women's colleges

It may be the age of coed universities, but single sex schools are far from obsolete 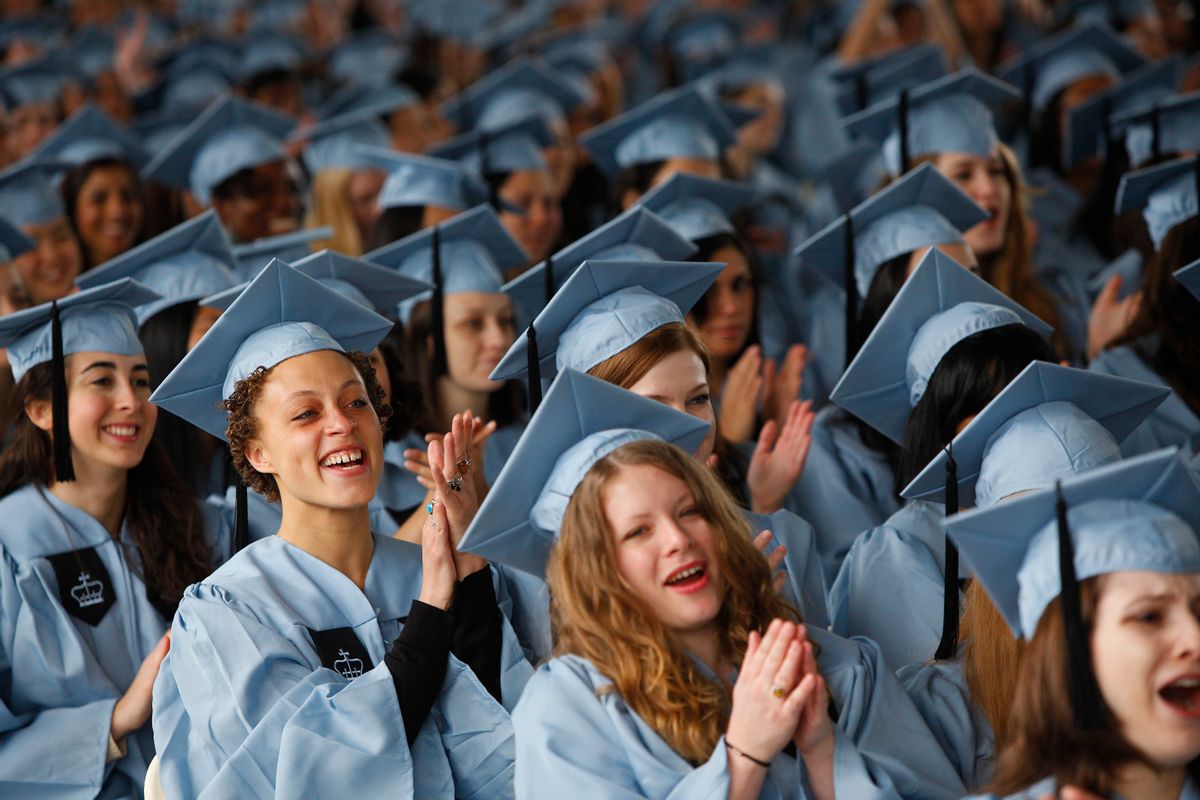 Graduating seniors cheer at the commencement for Barnard College, in New York, May 18, 2009. (Reuters/Chip East)
--

This week, the always effervescent Meryl Streep addressed my alma mater, Barnard College, with a heartfelt commencement speech about the importance of empathy and a hearty dose of girl power. There has been an enormous generational shift, Streep announced, from when women could only be expected to clean the inside of prestigious academic institutions to a time when women match men in earning advanced degrees. "There are cracks in the ceiling, cracks in the door, cracks on the court and on the Senate floor."

Most of her speech was uplifting and smart, unpretentious and filled with those little, savory nuggets of quotable wisdom that good commencement addresses are filled with. It was exactly what a graduation speaker is supposed to do, in other words. But when Streep, herself a graduate of Vassar when it was still a single sex institution, came to why it was that women's college was different, I had to disagree: "I went to Vassar, and outside of competition for boys my brain woke up. I could be aggressive, slovenly ... and my friends let me. They accepted me like the Velveteen Rabbit."

I don't doubt that Streep experienced those things, and that she made wonderful, encouraging friends who helped her find herself. And maybe it was separation from boys academically that made the difference for Streep. But, to my ears, her awakening sounded too much like the shaky reasoning behind women's only colleges that Morgan Smith over at Double X pointed out in 2009: that single-sex colleges are important because they allow women to flourish academically in a bastion away from the distractions of men. It's an easily debunked argument: Yes, the list of awesome lady-college graduates is long (Hillary Clinton, Madeleine Albright, Joan Rivers, Anna Quindlen to name a few), but so is the list of women graduates from co-ed school. Schools like Vassar and Barnard were originally founded because women weren't allowed into the hallowed halls of their Ivy League brethren. Now that the vast majority of universities are co-educational -- though, notably, Barnard's "brother school," Columbia College, only began letting in women in 1983 -- why have women's colleges anymore?

I fielded this question often as an undergraduate, and it was generally assumed by some of my less broad-minded conversational partners that I went to Barnard either because I was too dumb to get into Columbia, I was one of those fearsome, exotic, man-hating types, or because I was a timid wallflower who couldn't bear the brunt of the male gaze. Aside from sarcasm, outrage, and patiently explaining that "women's college" does not equal "nunnery," at first I fumbled for a response, usually landing on the list of successful women I cited above and praising their English department. Barnard is, after all, not just a good women's school but a good school, full stop. But by the time I graduated, I realized that though we don't need women's schools -- not in the same way we did in the 1900s, anyway -- we should have them, and I personally hope to have them around.

Here's why: Few other places I have been in the United States illustrate sexism, and the preposterousness of gender discrimination as much as women's schools. Most schools have rivalries, sometimes enacted in a light-hearted way, and sometimes in a spiteful way. The jibes towards Barnard from Columbia students often took on a particularly vicious, misogynistic character. One charmer of a joke went something like "Why is Barnard on the West side of Broadway? So if the Hudson floods, all of the dykes will protect Columbia." Barnard girls were all lesbians, or otherwise easy. Several Facebook petitions demanded that Barnard girls be prevented from buying Columbia sports apparel and getting University e-mail addresses -- this despite the fact that Columbia sweatshirts are available in the bookshop to anyone with a credit card. I took the same classes, ate the same food, drank at the same bars, and could even stay in the same dorms with them, but to some Columbia students I was an insidious outsider.

Obviously, most Columbia students didn't think that way, and after a jittery orientation, most of the anti-Barnard sentiment settled down. And, like Streep, I made many smart and terrific lady friends -- many guy friends from across the street, too. I took fantastic classes from notable academics at Columbia and Barnard, and the few nasty comments that floated my way far from ruined my college experience. Looking back, I would never have decided to go anywhere else. But the few flare-ups reminded me what women are still up against. We may not be gender segregated anymore, but that doesn't mean we're all treated equally and with respect. We should want to keep women's colleges for the same reason that we want all colleges: To learn about each other and repair what injustices we can.