Chancellor Angela Merkel announces a surprise crackdown on bond markets. The rest of Europe was not consulted 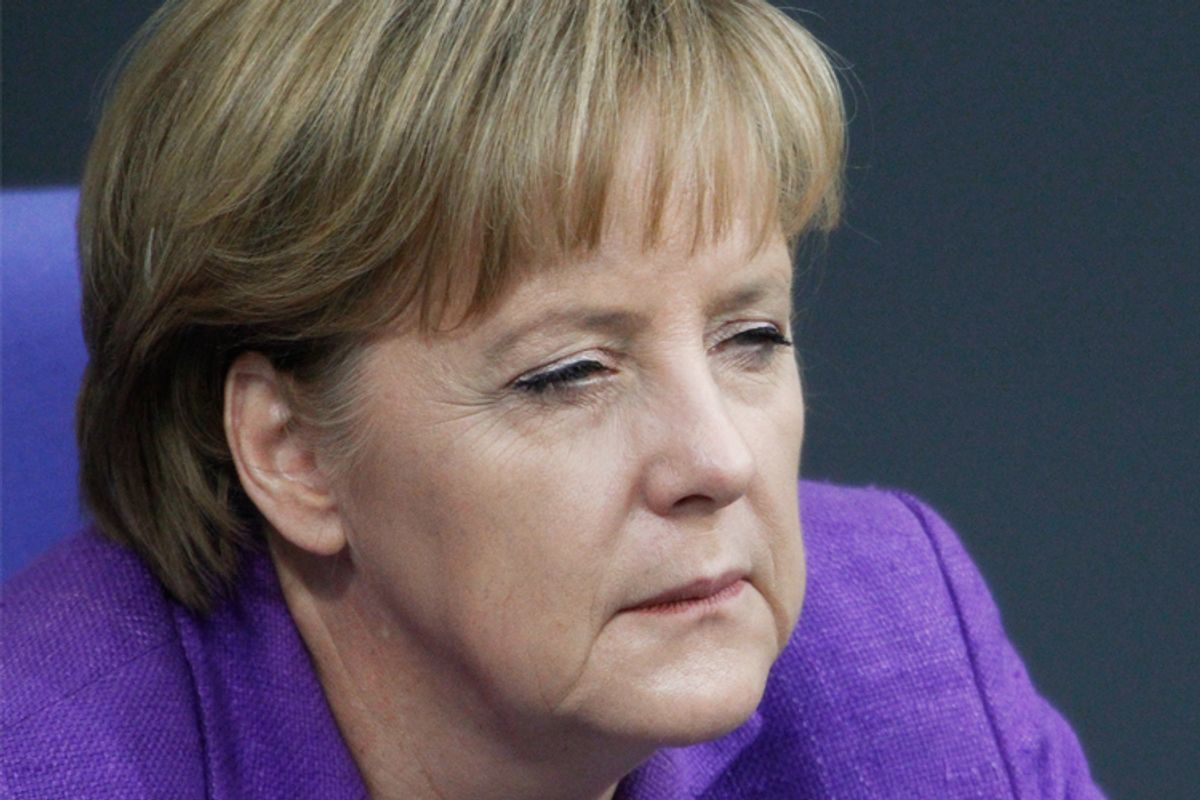 German Chancellor Angela Merkel attends a debate on Germany's handling of the European debt crisis in Berlin May 19.
--

The European financial crisis refuses to settle down. In the United States, an amendment to the Dodd bill on bank reform that would ban naked credit default swaps, proposed by Sen. Byron Dorgan, D-N.D., is going nowhere. But across the Atlantic, Germany sent shock waves throughout Europe and bond markets all over the world by suddenly instituting its own ban on naked credit default swaps written against eurozone bonds, as well as naked short-selling of stocks and bonds issued by Germany's biggest banks and insurers.

"Naked" short-selling refers to the practice of making a negative bet on the value of something that you don't own. A naked credit default swap is a bet on the credit-worthiness of a bond or a security that one doesn't own. Critics call it gambling, pure and simple, and argue that it contributes to extreme, unwanted volatility in markets. The theory is that a "wolf pack" of naked short-sellers can target a company, or a country, and swiftly create a vicious cycle in which the sheer volume of short-selling becomes a force that further erodes the value of whatever is being hammered.

Germany's move has reignited the debate over whether naked short-selling serves a useful economic purpose. Defenders of the practice are tut-tutting everywhere, even as Byron Dorgan is probably green with jealousy. But there's another story here: Germany's unilateral action exposes, yet again, the flimsy structure of European economic integration, and the inherent challenges of regulating international financial markets in a domestic context.

Germany's decision to ban credit default swaps on eurozone debt applies to Germany -- it doesn't stop traders in London or France or the U.S. from speculating. In fact, it may even encourage them to engage in more short-selling. The snap judgement is that the ban is a "desperate," politically motivated gesture aimed at shoring up popular support for German Chancellor Angela Merkel's shaky coalition government. The smell of desperation breeds uncertainty, and uncertainty makes traders nervous. Panic begets panic.

And for something like this to work, it requires, at the very least, continent-wide coordination. Otherwise you're just playing whack-a-mole.

A ban in Germany alone will likely be ineffective, former U.K. Finance Minister Nigel Lawson said in an interview with Bloomberg Television.

"People will find ways of getting round it, move to other jurisdictions," Lawson said. "It can only be workable for a very, very short time."

Germany's move shines a spotlight on contradictions baked into the eurozone. Individual countries are naturally more responsive to their domestic political realities than they are to the question of "what's best for the eurozone as a whole." Germany, one of the prime locomotives of European integration since the very beginning, should know this better than just about anyone. Instead, by making a unilateral assault on the bond market vigilantes, the Germans have tacitly encouraged every other eurozone member to go its own way. The French immediately questioned the ban, but were especially upset that a decision couldn't have been postponed until after a Friday meeting of eurozone finance ministers.

To reiterate, it's not that Merkel isn't making sense when she declares that "The lack of rules and limits can make behavior in financial markets driven purely by the profit motive destructive and lead to an existential threat to financial stability in Europe and even the world." That's a hard statement to disagree with. But when she orchestrates a unilateral ban on short-selling without consulting her neighbors, how is she different from a Greek or Spanish prime minister who, mindful of domestic economic priorities, runs an excessively large budget deficit?