"The Good Guys": Bradley Whitford with a bad cop mustache? 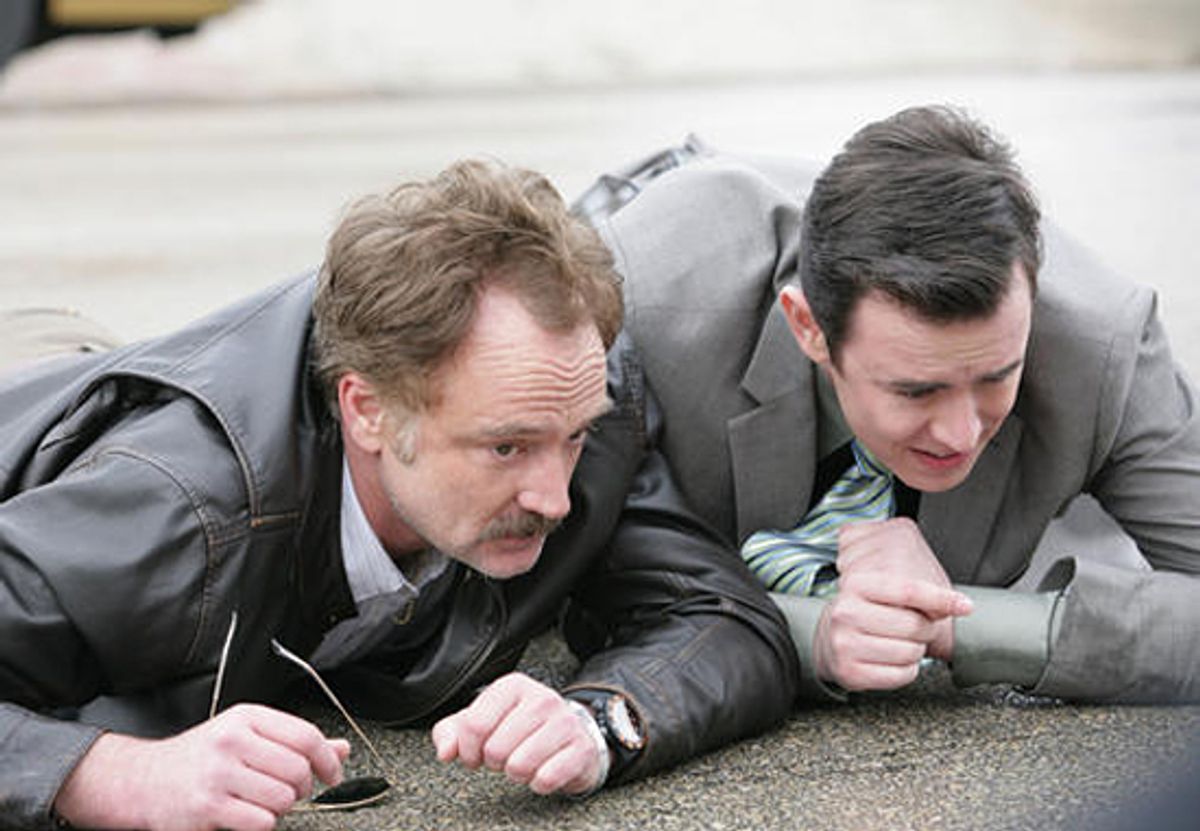 Bradley Whitford and Colin Hanks in "The Good Guys."
--

Most of us never quite adjust to the restrictions of adulthood. We greet the unrelenting responsibilities and inconveniences that accompany the American dream -- mortgage payments, dentist appointments, yardwork, meal preparation -- with the eye-rolling exasperation of teenagers. Having spent our youth imagining that being an adult meant reading great books and sipping bourbon in leather armchairs in the "study," we're indignant to discover that we don't like bourbon, or that we don't have a study, or even that, when placed in an actual study with a book and a glass of bourbon, we find ourselves wanting to play "Grand Theft Auto Vice City" instead.

Maybe this goes part of the way toward explaining why the buddy cop comedy never dies. When we see the good, responsible, strictly by-the-books cop tell the renegade, reckless cop to stop screwing around or the chief's going to have his ass on a platter, it's as if we're watching our own superegos telling our ids to stop ordering double martinis for lunch and then messaging random Facebook friends all afternoon -- activities that are, of course, sublimations of even more destructive urges. In truth, we all have a renegade cop somewhere deep inside, one that wants to pack heat, drive too fast on the highway, swig liquor out of a flask, and engage in fiery gun battles with scar-faced assassins.

But guess what? Eventually they start to develop a sort of begrudging respect for each other. Jesus, can you imagine what would happen if all of those mismatched cop teams out there never learned to get along? Our nation's cities would spiral into violence and chaos!

Although "The Good Guys" might sound like the sort of cliché-heavy dramedy unlikely to hold our attention for more than a few milliseconds, the show pushes its formula just past zany and lands in the far more appealing territory of downright absurd: When small-time thief Julius breaks into a home, he still stops to answer his cellphone. ("Hello? Yeah, hello, this is Julius! Yeah, listen, can I call you back? I'm just stepping into work. OK, all right.")

And while it may be just another day at the office for Julius, this is also the day that underling drug distributor Escalante chooses to tell his boss to take this job and shove it. So he sits down and writers his boss in Peru a letter:

"Dear Romero, For five years, I have been your courier, delivering cocaine to your buyers in Dallas. Always, I stay in budget motels to save you money. Because you are too cheap to pay for a mid-sized sedan, I rent the sub-compact car with roll-down windows and no GPS. I sell your drugs for you, and you call me your Chihuahua and pay me less than your pool boy. But no more. I am taking your four million dollars you son of a whore!"

Eventually, Julius the small-time thief and Escalante the small-time drug distributor become caught up in a larger mess along with Dan and Jack, but the crimes themselves are obviously just a means of moving the comedy along; Dan swigs booze and reminisces about the good old days; Dan eats bad cottage cheese and vomits on the crime scene ("What, you've never heard of Good Cop, Sick Cop?" he asks Jack); Dan expresses his distrust of technology:

Dan: Computers, I can't get used to them. Aren't you worried they're gonna, you know, turn on you?

Jack: I'm not particularly worried my computer is going to attack me, no.

Dan: I look at the one in the office, and it's like it's thinking, making plans!

See how, in America, making a character a little bit of a moron actually makes him more realistic? While "zany" cops are about as compelling as "harried" working moms or "rebellious" teenagers, an old cop with a bad cop mustache and bad cop sunglasses who refers to looking up information on "the computer machine" actually seems like a real person. Why do we suspect that the inspiration for Dan Stark is out there somewhere, trimming his mustache in the rear view of his Camaro right before he pays a little visit to the local strip club? ("Titty bar" is probably what he calls it.)

Of course, a lot of the humor of "The Good Guys" also resembles the three-ring circus of absurdity that's trickled down from movies like "Tropic Thunder," from the scene where Escalante tells a plastic surgeon "I wish to look like Erik Estrada!" to the point where drug lord Romero tells "the second best assassin in the world," with great bravado, "Go to the U.S., find Escalante, and my golf bag. Show us all why you are the second best!"

This flavor of farce is about the right speed for summer TV. Maybe we don't like bourbon or have a study, maybe we spend most of our free time paying bills and doing laundry and throwing out old leftovers anyway; the least the small screen can do for us is offer up a cathartically reckless alter ego who's free to drink too much, drive too fast and engage in shoot'em-ups whenever the mood strikes. And if even boozing ladies' man Dan Stark is nostalgic for the old days, that tells you something about the no-fair nature of adult life, doesn't it?

What did you say? It's my turn to make dinner again? No fair!