Bush lied about his military service, and so did Reagan 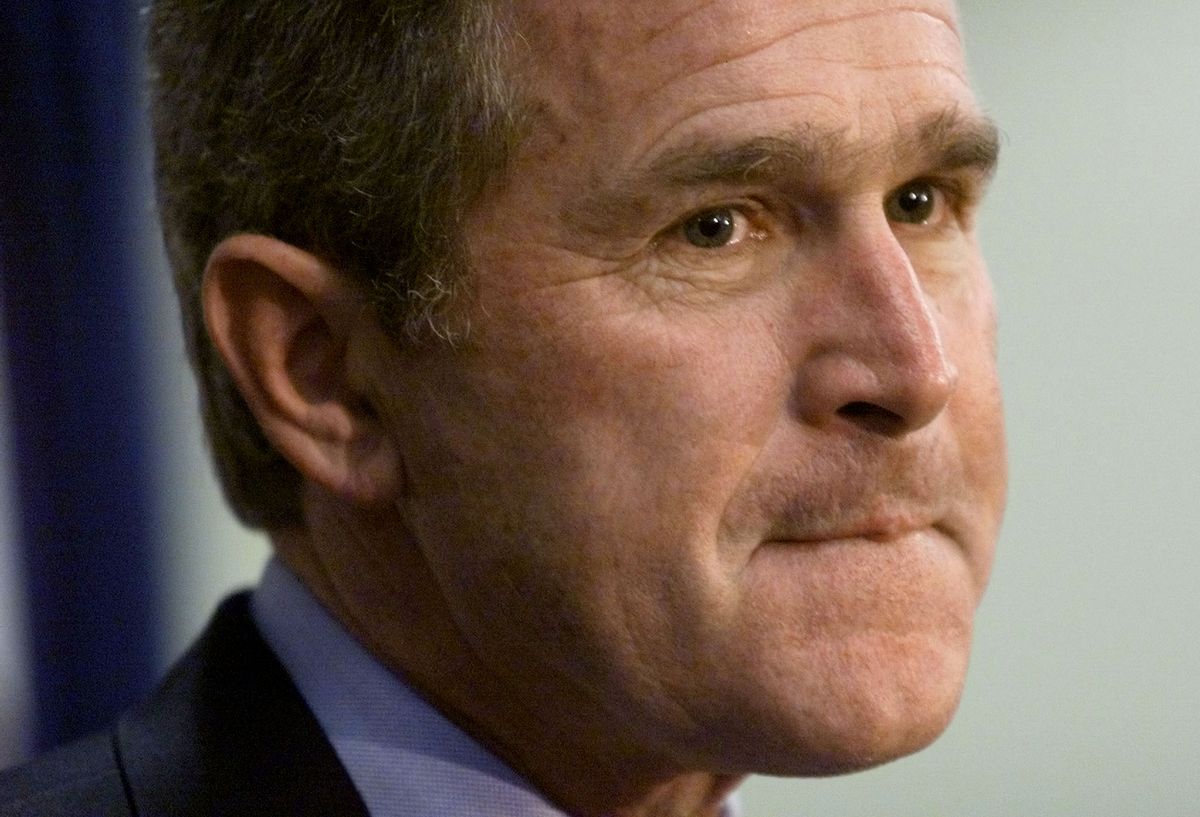 Republican presidential candidate George W. Bush listens to a reporter's question about his position on abortion January 20. Bush said he thought the 1973 Roe v. Wade Supreme Court decision on abortion was a "reach" and over stepped constitutional bounds. RTW (Reuters)
--

Richard Blumenthal's apparent misstatements about his military service -- as reported so tendentiously in the New York Times -- have delighted Republicans who once considered the Connecticut attorney general unbeatable in his state's U.S. Senate race. Now that we know the videotape cited by the Times also includes Blumenthal accurately describing his service in the Marine Corps Reserve, their jubilation may be premature. Whatever the ultimate verdict on the Blumenthal story, however, it's worth noting that he was hardly alone in misstating -- or falsely recollecting -- the facts about his stint in uniform. Leaving aside Lindsey Graham, who has puffed his "wartime" service for years, such mythmaking is indeed characteristic of the politicians most revered by the GOP.

Take George W. Bush, whose controversial service as a Texas Air National Guard pilot was shrouded in mystery, evidently because he wanted to conceal the basic facts of his privileged admission to the TANG and his strange departure from its ranks. In his 2000 campaign autobiography, ghosted by Karen Hughes, Bush claimed that after completing his training in the F-102 fighter plane, "I continued flying with my unit for the next several years." That simple sentence was entirely untrue, according to records eventually released by the Bush campaign, which showed that he had never flown in uniform again after his suspension from active duty in August 1972 for failing to show up for a mandatory physical examination.

In the same book Bush also suggests that he tried to volunteer for service in Vietnam "to relieve active duty pilots" fighting the war. But, of course, the entire purpose of his privileged (and questionable) enlistment in the TANG was to avoid the Vietnam draft, as he hinted in a 1998 newspaper interview when he said: "I don't want to play like I was somebody out there marching [to war] when I wasn't. It was either Canada or the service and I was headed into the service." Two years later, under the tutelage of Hughes, that momentary candor evaporated.

Yet Bush's self-serving revisions cannot compare with the fantastic recollections of the late Ronald Reagan, whose veneration by Republicans was never diminished by his  bizarre utterances. In November 1983, he told Israeli Prime Minister Yitzhak Shamir during a White House visit that while serving in the U. S. Army film corps, his unit had shot footage of the Nazi concentration camps as they were liberated. He repeated the same tale to Nazi hunter Simon Wiesenthal and other witnesses. Reagan had indeed served in the Army and worked on morale-boosting movies for the War Department. But he had done so without ever leaving Hollywood for the entire duration of the war.

Bush's phony account of his Guard service seems to have been a calculated prevarication by someone who just didn't expect to be caught. Reagan's false memory could be regarded in a more generous light, perhaps as a signal of his later dementia. (At FAIR, Jim Naureckas notes that the New York Times dismissed the Nazi camp fantasy as a "flight of imagination.")

But since the rise of Rand Paul is focusing attention on libertarians (and their vexed relationship with the GOP), it is irresistible to quote Murray Rothbard, the founder of modern libertarianism -- and a very close friend and associate of the Paul family -- on the subject of Reagan's delusional storytelling. In a 1989 column titled "Ronald Reagan: An Autopsy," which can still be found on the website of Lew Rockwell, another very close associate of Ron Paul, he snarked:

The degree to which Reagan is out of touch with reality was best demonstrated in his concentration camp story. This was not simply a slip of the tongue, a Bushian confusion of December with September. When the Premier of Israel visited Reagan at the White House, the President went on and on for three quarters of an hour explaining why he was pro-Jewish: it was because, being in the Signal Corps in World War II, he visited Buchenwald shortly after the Nazi defeat and helped to take films of that camp. Reagan repeated this story the following day to an Israeli ambassador. But the truth was 180-degrees different; Reagan was not in Europe; he never saw a concentration camp; he spent the entire war in the safety of Hollywood, making films for the armed forces…

There are only two ways to interpret the concentration camp story. Perhaps Reagan engaged in a bald-faced lie. But why? What would he have to gain? Especially after the lie was found out, as it soon would be. The only other way to explain this incident, and a far more plausible one, is that Ronnie lacks the capacity to distinguish fantasy from reality. He would, at least in retrospect, have liked to be filming at Buchenwald. Certainly, it made a better story than the facts. But what are we to call a man who cannot distinguish fantasy from reality?

It is surely frightening to think that the most powerful position in the world has been held for eight years by a man who cannot tell fact from fancy. Even more frightening is the defection of the media, who early lost heart and played the role of a submissive receptacle for photo opportunities and press-release handouts. One reason for this defection was the discovery of Reagan's Teflon nature. Another likely reason was that journalists who were too feisty and independent would be deprived of their precious access to the Presidential plane or to inside scoops or leaks from the White House. And a third reason was probably the desire not to dwell on the vital and hair-raising fact that the President of the United States, "the leader of the free world" and all that jazz, is nothing more than a demented half-wit.