Blumenthal drama a reminder that GOP can still win the Senate 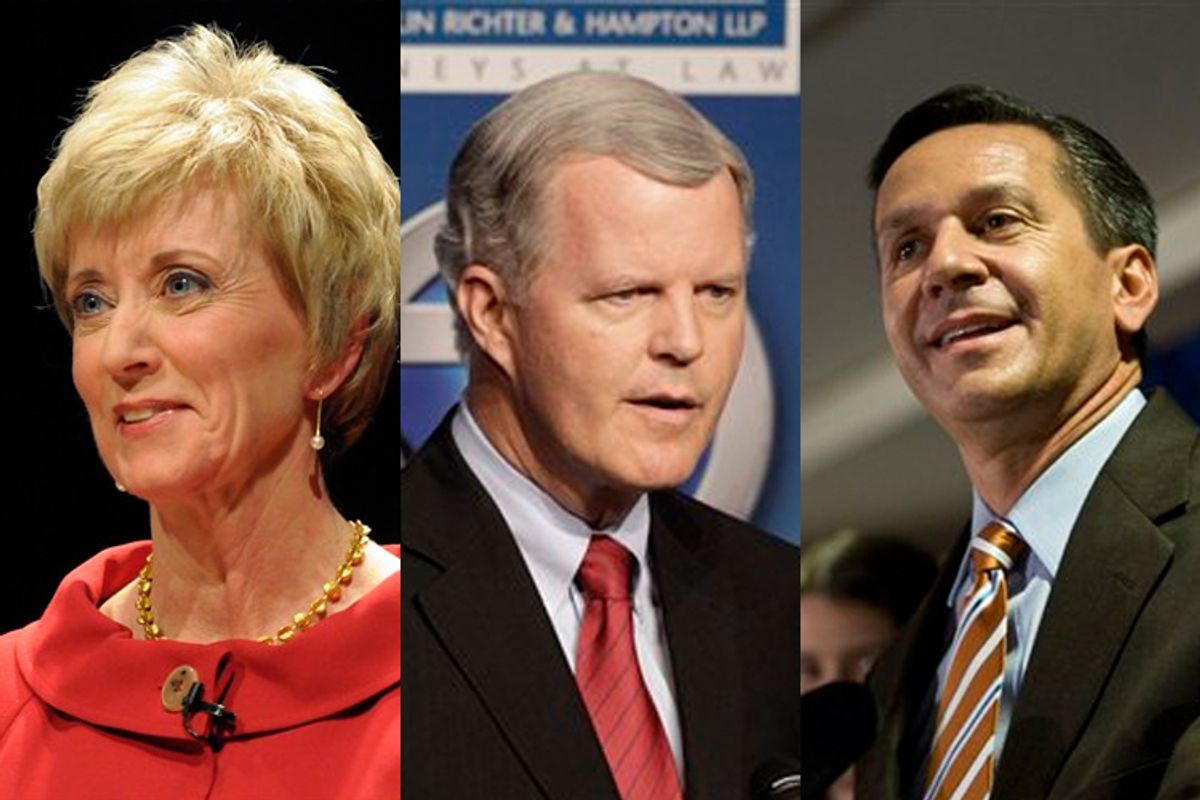 WWE executive Linda McMahon of Connecticut, former Rep. Tom Campbell (California), and Washington's Dino Rossi: GOP hopes of a Senate majority may depend on them.
--

It was just a few weeks ago that Democrats let loose a collective sigh of relief. With the news that George Pataki and Tommy Thompson would both be passing on Senate campaigns, it seemed just about impossible mathematically for the GOP to win control of the Senate this fall.

But this week's Richard Blumenthal drama in Connecticut is bringing some apprehension back to the surface.

It remains to be seen whether Blumenthal, who entered his state's Senate race as a white knight poised to save his party from Chris Dodd's collapse, will sustain much permanent damage from a New York Times story that suggested he's embellished his military record. Blumenthal has mounted a vigorous defense and video has now emerged that shows him properly characterizing his service. The story may fizzle out and Blumenthal could return to his dominant position in the polls relatively unscathed.

Still, an overnight Rasmussen poll -- take it for what it's worth -- showed his support evaporating after the story was published on Tuesday. That finding is hardly authoritative. Polling conducted next week, after voters have absorbed more coverage of the story and Blumenthal's defense, will provide a much more meaningful gauge. But for now, at least, there's volatility in the Connecticut race -- a remarkable development, given that Democrats figured they'd never have to worry about the contest again after Blumenthal got in back in January.

And if the story doesn't fizzle out, the fall implications for Democrats are even more worrisome.

A competitive race in Connecticut would require national Democrats to spend money in the race -- both through their official committees and through their benefactor network. This would be especially true if Republicans nominate Linda McMahon, the professional wrestling executive who is pouring tens of millions of dollars into her own effort. In addition to securing the seat, the original promise of Blumenthal's candidacy was in its price tag for national Democrats: zero. But if he ends up in a dog fight, money that Democrats would otherwise send to other competitive states will have to be redirected to Connecticut. And then there's the possibility -- unthinkable a week ago, not quite as unthinkable now -- of an outright GOP victory.

The sudden volatility in Connecticut underscores how the Senate landscape has evolved over the past few weeks. When Pataki and Thompson declined to run (thereby shoring up Democratic seats in New York and Wisconsin), it seemed that Republicans -- under a best-case scenario -- would be able to pick up eight seats in November (in Delaware, Pennsylvania, Arkansas, Illinois, Indiana, North Dakota, Nevada and Colorado). That would still leave them two seats shy of the 51 they'd need for control of the Senate.

But now there are three states after those eight in which the GOP -- at least for now -- can point to plausible victory scenarios. One, obviously, is Connecticut.

Another is California, where Barbara Boxer's support is ominously low for a three-term incumbent. California is an expensive state and the well-funded Boxer may be able to spend her way to victory. She might also catch a break if the GOP nominates the erratic Carly Fiorina, instead of the more marketable Tom Campbell. But for now, the situation for Democrats in California is -- just like Connecticut -- volatile. A GOP win in the fall is no longer so far-fetched.

Same for Washington state, where Republicans will be in the game if they can coax Dino Rossi, who vastly outperforms the other GOP contenders in polling against Patty Murray, into the race. If Rossi declines to run, and there are many who believe he will, Murray will be in strong position to win a fourth term. But until and unless Rossi stops toying with a bid, there is simply too much uncertainty for Democrats to feel confident.

For the GOP, the potential emergence of Washington, California and Connecticut as fall targets offers renewed hope of a Senate majority. If they can pick up the eight other seats they were already targeting, then winning just one from this new trio would bring them to 50 seats -- at which point they could possibly bargain with Joe Lieberman for a 51st vote. And if they can win more than one from the trio, they'd be able to secure a majority without Lieberman, or to absorb a loss in one of their original targets.

The operative word here is "volatility." Democrats may end up holding on in California, Washington and Connecticut with ease -- just as they may end up staving off Republicans in several of the GOP's original eight pickup targets. (The victory of Joe Sestak in Pennsylvania on Tuesday, for instance, probably improved Democrats' odds of protecting that seat.) For now, though, there are too many what-ifs for Democrats to be cocky about their Senate majority.