No, GOP, you can't have the car keys back

Barack Obama seems to be finally realizing that the GOP needs to be confronted, not coddled 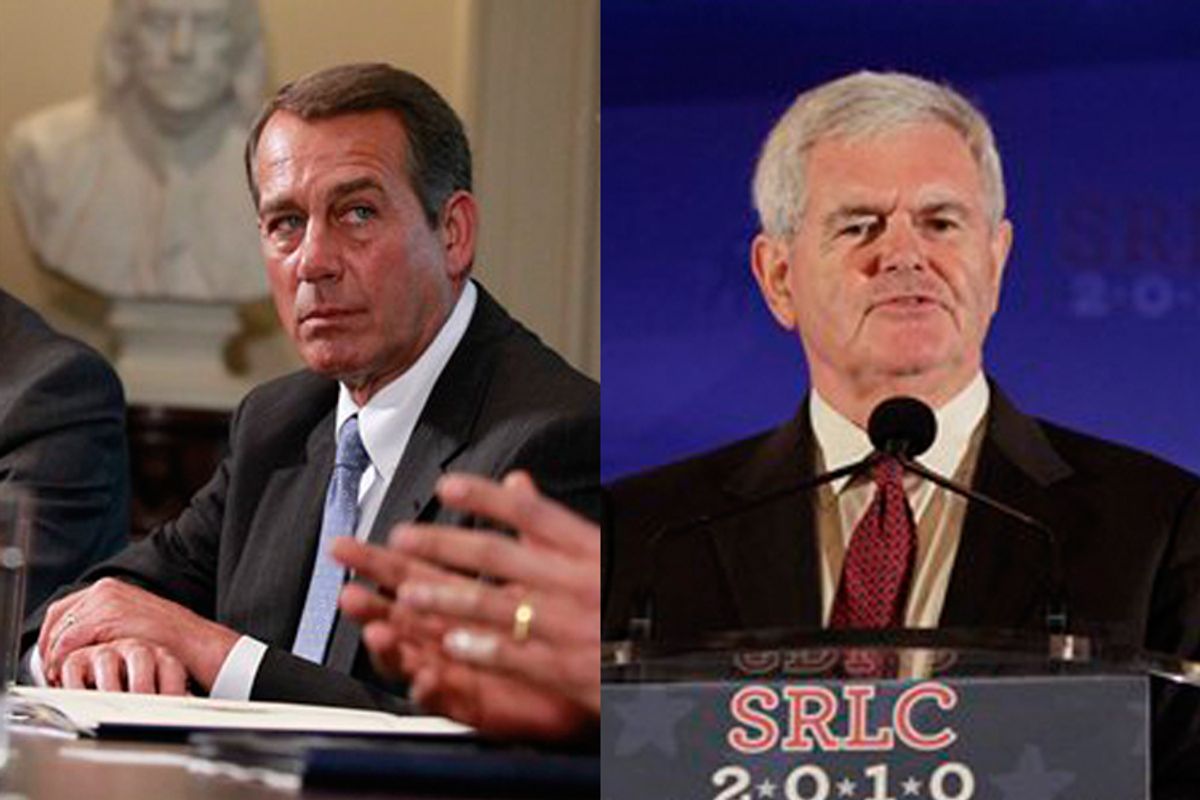 One minor mystery of the Obama administration is whether the president has actually believed that the nation's most intractable problems could be solved by the wonder-working power of bipartisanship and the emollient balm of his personality. He wouldn't be the first politician whose ego convinced him he could sweet-talk his bitterest opponents.

Until quite recently, it's been much the same with jobs and the economy. Despite unanimous Republican opposition to the administration's $787 billion stimulus bill and universal predictions of doom, the White House has often acted as if the party's reasonable leadership would eventually return to the politics of negotiation and compromise.

Instead, we've seen the GOP increasingly dominated by its irrational Chicken Little wing, seeing grim portents and predicting doom. Continuing their party's decades-long War on Arithmetic, Republicans act as if the highest form of patriotism is to demand tax cuts even as a USA Today analysis documents that "Americans paid their lowest level of taxes last year since Harry Truman's presidency ... Federal, state and local taxes -- including income, property, sales and other taxes -- consumed 9.2 percent of all personal income in 2009, the lowest rate since 1950, the Bureau of Economic Analysis reports."

The historic average has been 12 percent.

Along with the recession, the main reason was the Obama stimulus bill, which included one of the largest tax cuts for wage-earners in U.S. history, totaling $282 billion. Republicans opposed it anyway. Almost everybody got a substantial tax break, even if Tea Party patriots don't realize it.

Meanwhile, the Bureau of Labor Statistics reports that the U.S. economy generated 290,000 jobs in April, the strongest month in four years. That brings new jobs created in 2010 to 573,000.

And how did GOP savants respond to the good news? Citing the unemployment rate, House Minority Leader John Boehner called it "disappointing news ... Washington Democrats have no coherent agenda to create jobs, and no interest in doing anything but continue to spend money we don't have on 'stimulus' programs that don't work."

Don't work? The National Journal's Ronald Brownstein puts things in perspective: "If the economy produces jobs over the next eight months at the same pace as it did over the past four months, the nation will have created more jobs in 2010 alone than it did over the entire eight years of George W. Bush's presidency." It's a fact. Should current growth persist, the U.S. economy will gain roughly 1.7 million jobs this year. From 2001 through 2008, the Bush economy generated about 1 million.

Of course, with 15.3 million Americans out of work, we're far from being out of the woods. Indeed, the nation's quickening economy has actually led to a slight uptick in the unemployment rate, as thousands who'd given up seeking work rejoined the labor market. But we can definitely see a path to greater prosperity.

Meanwhile, Republicans keep baying at the moon. On a recent "Fox News Sunday," former House Speaker Newt Gingrich gravely announced that "The [Obama] secular-socialist machine represents as great a threat to America as Nazi Germany or the Soviet Union once did."

A sane political movement would keep a prating coxcomb like Gingrich off television. Whether Newt actually believes this rubbish, or is merely following the Tea Party fife and drum corps around the bend, strikes me as of little interest. Politically, it's pointless to reason with crazy people -- make-believe or real.

Speaking recently in Buffalo, President Obama signaled that maybe he gets it. "When I took office," he said, "we were losing 750,000 jobs a month ... I had just inherited a $1.3 trillion deficit from the previous administration, so the last thing I wanted to do was to spend money on a recovery package, or help the American auto industry keep its doors open, or prevent the collapse of Wall Street banks whose irresponsibility had helped cause this crisis. But what I knew was if I didn't act boldly and I didn't act quickly ... we could have risked an even greater disaster."

Then, at a Manhattan fundraiser, Obama came up with the perfect metaphor. He said that Republicans had made a calculated decision to oppose all White House initiatives, and to hope for the worst. "So after they drove the car into the ditch, made it as difficult as possible for us to pull it back, now they want the keys back. No! You can't drive! We don't want to have to go back into the ditch! We just got the car out!"

Give 'em hell, Barack. Over and over until they get the message.