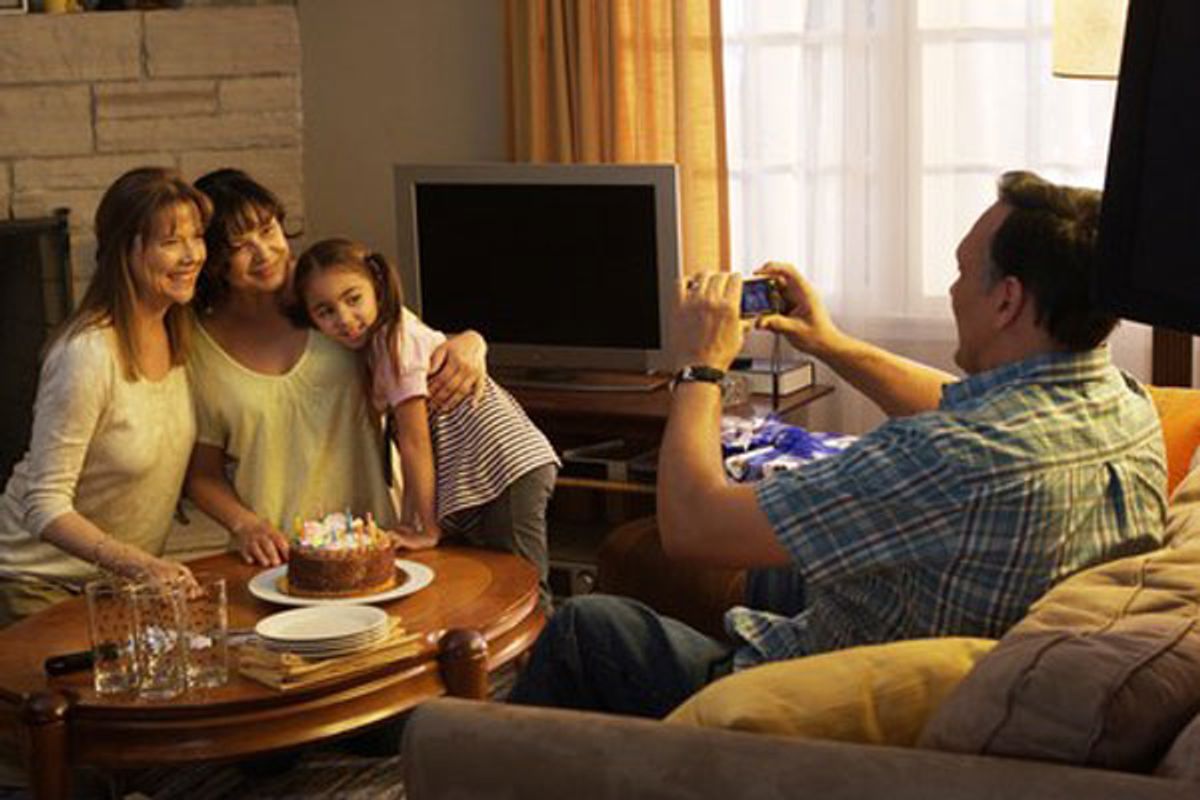 It's been a bad few months for adoptive parents, publicity-wise. First, there was the Tennessee woman who put her 7-year-old adoptive son back on a plane to Russia, saying she no longer wanted to parent him. Then, there was Sandra Bullock's decision to adopt a black baby from New Orleans, a move that brought forth sneering comments about the Oscar winner's "white liberal guilt." The two cases have wildly different outcomes but both betray a certain cultural ambivalence toward adoption in general and adoptive mothers in particular. Whether they're portrayed as misguided bleeding hearts or evil stepmother equivalents, adoptive moms can't seem to catch a break.

Now comes Rodrigo García's new film, "Mother and Child," an ensemble movie that uses adoption as its overarching theme. "Mother and Child" is getting rave reviews, with critics praising it as "timely," "extraordinary" and "a masterpiece." As an adoptive mother, I found it insultingly one-sided.

Writer-director García has said that he wanted to make a film about "people who live haunted by the absence of a loved one -- through death, distance, prison, exile, divorce." After cycling through the possibilities, he decided that adoption yielded the richest dramatic possibilities for exploring loss. In other words, Garcia chose loss first, adoption second. Clearly, loss compels him more; it's the gray-tinted lens through which every adoption scenario in the movie is seen.

He does have the advantage of three extremely gifted actresses, who parse his melodramatic script for every conceivable nuance. At times, they briefly elevate it. Annette Bening plays Karen, a Los Angeles physical therapist in her 50s who gave a child up for adoption when she was 14. The grown child is Elizabeth (Naomi Watts), a brittle lawyer who doesn't seem able to connect to anyone on a human level. Elsewhere in town there's Lucy (Kerry Washington), an infertile woman who longs, more than anything, for a baby.

For Karen, this decades-ago loss is the defining point of her existence: Thirty-seven years after surrendering the baby, she's so damaged that she walks around in a constant state of coiled rage, occasionally spewing bile like a human Eyjafjallajokull. Equally damaged, Elizabeth channels her grief into professional and sexual ambition, shredding the competition in order to get to the top. Both women seem frozen, unable to move beyond identities that were fixed for them 37 years before. The message here seems to be that if you give a child up for adoption, or if you're an adoptee, it will ruin the rest of your life.

I wouldn't want to underestimate the feelings of birth mothers, or of grown-up adoptees. From talking to adult adoptee friends, and reading memoirs like Sarah Saffian's "Ithaka" and A.M. Homes' "The Mistress's Daughter," I know there are some who struggle as painfully as Karen and Elizabeth do. But there's a third side of the adoption triangle -- the adoptive parents -- and in this movie, Elizabeth's adoptive parents are erased. "My adoptive father died when I was 10. I'm not close to my adoptive mother," she tells her boss. We never hear of these people -- so important to her development -- again.

Instead, the third side of the triangle is represented by Washington's character, Lucy, the infertile woman who longs for a baby. In a role very similar to the one Jennifer Garner played in "Juno," Washington is deeply sympathetic, yet García doesn't cut her much slack. This movie is all about loss and suffering, after all. That's why Lucy, after one disappointment, weeps inconsolably and says, "Adoption is so unnatural. Why doesn't anyone ever say that?" Not content with making her suffer, García has her beat herself up verbally, too.

When you adopt a baby in the United States, you're strongly advised to attend something called an adoption triad panel. It consists of a birth mother, an adult adoptee and an adoptive parent telling their stories, and in that way, it aims to shed light on the three different perspectives, in much the same way García's movie does.

Four years ago, when my husband and I were considering adopting a second child (we had a 4-year-old biological son), we sat in a room with some 40 other adults, listening to stories of adoption. We were lucky. In addition to the birth mother and adoptive mother, our panel had three adult adoptee speakers. Though they'd had different experiences (one had searched for her birth parents and found they were dead, one had decided not to search for his birth parents, one had developed a good relationship with his birth mother), all three adoptees were certain of one thing: "Mom" and "Dad" were the people who brought them up, the ones who'd been there to push swings, read bedtime stories, bandage scraped knees.

Adoption isn't for the faint of heart. Becoming an adoptive parent means accepting a certain loss of control. Most babies put up for adoption aren't well cared for prenatally, and there's little or nothing you can do about that. In an "open" adoption that's arranged before the birth -- the "Juno" scenario -- the birth mother can change her mind and decide to parent. If the adoption does go forward, you have to face the fact that, at some point in the future -- usually during the already turbulent period of adolescence -- your child will grapple with the facts of adoption and identity. It's impossible to predict how complicated that will be.

But although it's no walk in the park, neither is adoption all about loss. A few months after the triad, we were matched up with a birth mother. Kay (not her real name) was three months pregnant, and I liked her from the first time we spoke. Open and thoughtful, she seemed to have considered her options carefully. Having kept a baby she'd had at 16, Kay knew what it was like to be a mom -- and being single, she knew she couldn't support another child. Putting her baby up for adoption wasn't easy, but it buoyed her to know that she was making another family happy and getting the best possible life for her unborn child.

In the movie, Lucy eventually adopts a baby whose birth mother has died in childbirth. With the birth mother out of the picture there'll be no messy aftermath, and García implies that this is the best kind of adoption. But Lucy's is also a Pyrrhic victory: In exchange for her baby she loses her husband (he wants a blood connection with his child) and she's overwhelmed by the stress of single motherhood. It's interesting that in both "Juno" and "Mother and Child," the price paid for an adopted baby is the loss of a mate, therefore loss of emotional and practical support, as well as sexual love.

My daughter is now 3. Bonding with her was not instantaneous. She is strong-willed, fearless, athletic -- qualities that rather stand out in our quiet, bookish family. Where she rushes out to meet the world, running at full tilt, my son is slow, cautious, dependent. My daughter asks to see the scary parts of movies again; my son won't enter a darkened movie theater. He needs me to help him engage with the world, step by step; she needs me to be there to catch her when she falls off a high climbing frame. Later, she'll need me to tell her about periods and bras, to model for her that a woman can dream big, and go as far as those dreams take her.

In the movie, Elizabeth says, "The truth is, I don't know anything about [my mother], except she gave me up when she was 14." Here, Garcia recycles an outdated trope: The "real" mother is the birth mother. The adoptive mom is irrelevant, an interloper in the primal story of the genetic mother-child bond.

As my daughter runs around, eager to assert her independence, I can observe her split heritage. She has her birth mother's wide, Cheshire Cat smile -- but when she purses her lips in mischief, she looks uncannily like a photo I have of me at that age. Her bottomless curiosity reminds me of her father, my husband. And when I walk through the door in the evening and she vaults into my arms, shouting, "Mamma!" I feel the intensity of our mutual love and need.

I hope she'll also need me if she decides, in time, to search for her birth mother. Honestly, I'd be surprised if she decided not to search. Research shows that girls are more likely to search than boys, and my daughter has a curious, people-oriented nature.

If that time comes, I hope she'll feel comfortable discussing her doubts and hopes with me. I hope she'll find her birth mother quickly, build a meaningful relationship with her, and realize that she wasn't given up out of a lack of love. And I hope that, unlike in García's movie, I won't get written out of the story.

Sarah Coleman is a freelance writer in San Francisco.