How Rand Paul can take Kentucky and still doom the GOP 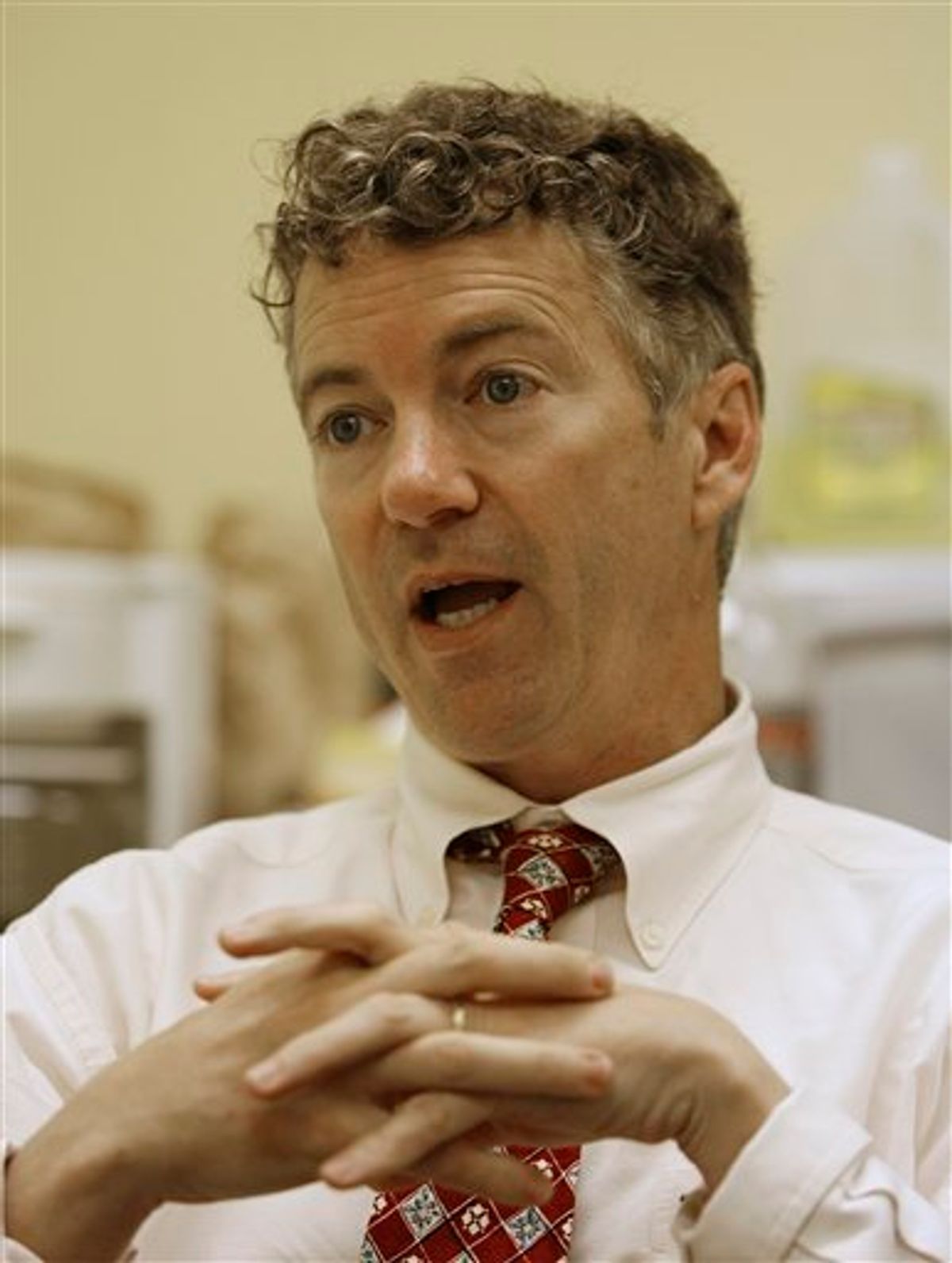 It's been noted, here and elsewhere, that the Republican establishment is not thrilled with the triumph of Rand Paul in the Kentucky Senate primary. The reason usually offered is that Paul will be the first major voice in the party to dissent from the dominant neoconserative line on national security issues. This certainly seems true, but there's a simpler reason why Paul should make Republicans nervous: he might be able to win in Kentucky, but he's going to spell trouble for the GOP nationwide, and maybe for longer than just this year.

To start off, there's Paul's opposition to the Civil Rights and Americans with Disabilities Acts. As our editor Joan Walsh noted last night, he's revealed himself as a true turn-back-the-clock reactionary (as well as surprisingly weaselly). Not that it's shocking, but at one point in his explanation of opposition to the Civil Rights Act, Paul tries to bring up the "commerce clause" of the Constitution.

The commerce clause is what allows the federal government to do much of its policymaking, because it authorizes Congress to regulate interstate commerce. It's the constitutional bedrock of the New Deal state. And there's a movement on the right -- with which Paul seems to reveal himself as a sympathizer -- that holds that this interpretation of the Constitution is incorrect. Tea Party media favorite Andrew Napolitano uses the favored phrase for the title of his book: "The Constitution in Exile." These are the guys who wouldn’t go crying "activist judges" if the Supreme Court struck down, say, Medicare. They'd say that democracy had finally been restored.

None of this is to say that Paul can't win Kentucky. To be sure, like every state, Kentucky has benefited immensely from New Deal and Great Society-era liberal lawmaking. (Did you know that the Tennessee Valley, which spills into western Kentucky, was a malarial zone until the 1930s? A malarial zone. Or how about the Surface Mining Control and Reclamation Act -- the only significant check on coal companies seeking to strip mine eastern Kentucky into a wasteland?)

But 2010 is going to be the best Republican election year since 1994, and at the moment, Kentucky is one of the most reliably conservative states. It's in the heart of the regional belt that President Obama had the hardest time convincing in the 2008 election. The key political characteristic here is a white population with, well, the politics of southern white folks, and -- unlike in, say, Georgia or South Carolina -- a black population too small to have a chance at making up for it. Frankly, it's entirely possible that Paul will benefit from his discomfort with civil rights law. Once a real, seemingly legitimate candidate comes out and says it, voters who are aware that they’re supposed to know better may feel comfortable giving voice -- and votes -- to their own quieted-down racism as well.

Even if Paul wins in Kentucky, though, he's bad news for his party in general. In fact, he's bad news especially if he wins. The Tea Party is going to be emboldened by a Senator Paul, and misinterpret his success in a conservative state as evidence that Tea Party conservatism is the road back to power for the GOP in general. When mainstream conservatives cite electability in primaries against Tea Party candidates, they'll have Paul thrown in their faces. But that won't make them any less right.

If Tea Party activists succeed in turning the Republicans into the advocates of repealing significant portions of the modern liberal bureaucracy, they're going to kill the GOP for a generation. This is what Newt Gingrich found out when he became House speaker -- the public had no appetite for an attack on Medicare or the dismantling of the Department of Education. In fact, this is a moment to which we can trace back the Tea Party: It was Gingrich's overreach that inspired the big-government, welfare-warfare conservatism of George W. Bush, to which the Tea Party itself is a response.

In other words, what we're seeing here is a back-and-forth between the purist right wing and the conservatives who understand the compromises involved in winning. Bush borrowed a bunch of money and doled it out happily. In so doing, he made his party palatable to a bare majority. Because the Republican establishment has wrested internal party power from the unelectable goons who make up its base, the Tea Party folks love to represent themselves as some kind of new, third force in American politics. They seem to imagine themselves standing outside the right-left continuum, with ties to the GOP that are just an incidental matter of convenience. But it's clear that they're little more than the inevitable revival of the right wing of the right wing. That can obviously sell in Republican primaries, and even certain general elections when the stars align.

But the national electorate is getting less white every year. Moreover, we're going to exit this recession with some weak, but significant, renewal of the tradition of government involvement in the economy. With the employment growing again, the economy recovering, and healthcare reform taking effect, the ground is disintegrating under the feet of the Tea Party, even as its members think their moment of triumph is at hand. That's the exact recipe for an unpopular minority movement to convince itself that it represents a broad majority, take over its party, and lead it to disaster.