"Sex and the City 2" brings back the flashy '90s princess, but we've found our era's new icon: Liz Lemon 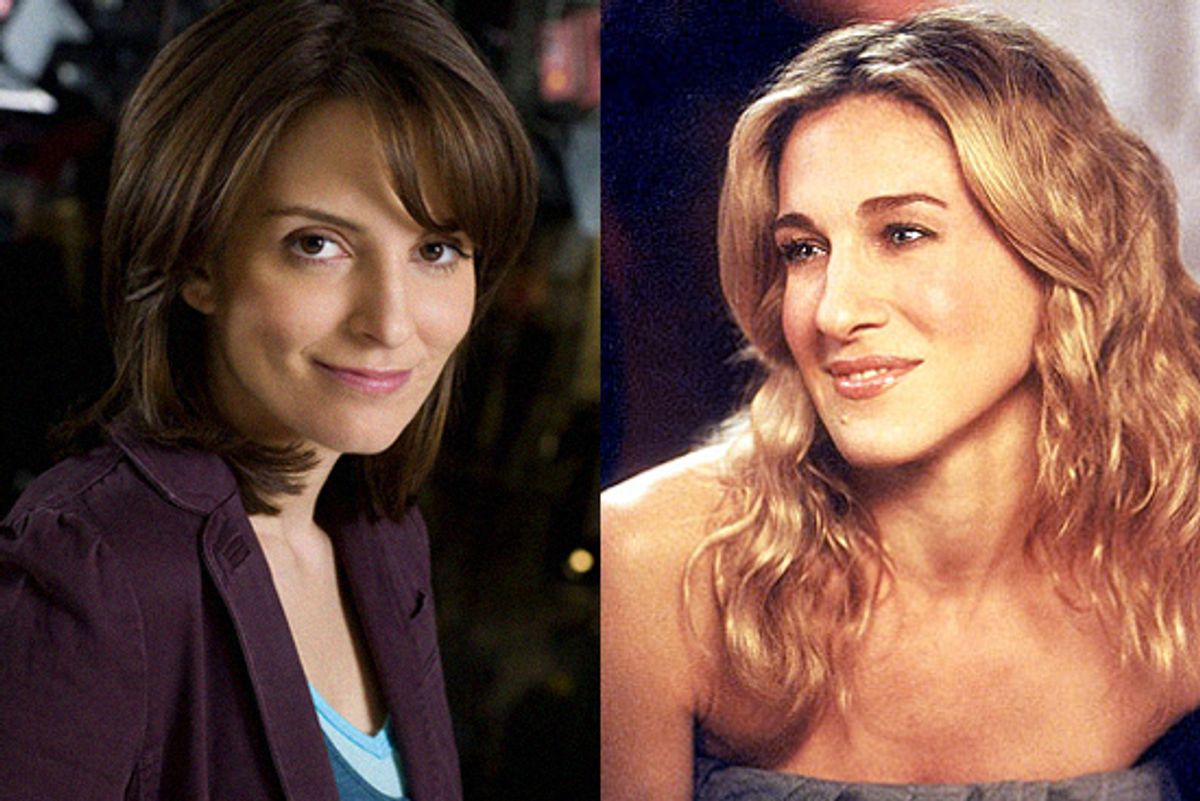 On May 27, "Sex and The City 2" whisks Carrie Bradshaw and her haute couture harem off to Abu Dhabi. It seems unnatural to see Sarah Jessica Parker's queen of New York City out of her element, but six years after she absconded with the perfect man and the perfect pair of Manolos, a jester has usurped her throne. There's a new everywoman on Fifth Avenue these days. She's messy, she's mean, and she's making ham the new black.

The frazzled "30 Rock" star, played by series writer and creator Tina Fey, is a heroine for the moment when an entire country feels like it just dumped a gallon of water on the floor while trying to change the office cooler tank (which Lemon did, in Season 4).

The parallels between Lemon and Carrie aren't subtle: Single career women married to Manhattan, forever orbiting a suave, older executive type while searching for love in all the wrong places and remaining the incisive, sarcastic voice of reason among a wacky circle of friends. Fey herself described Liz Lemon as a bumbling version of Carrie in an interview with People magazine last fall.

So how did we trade down from Carrie the Success to Lemon the Mess? Or in Lemonspeak, What the what?!

"Sex and the City" rode the crest of a fat financial era, back before big spending was taboo. Women with jobs, husbands and mortgages indulged in the escapist sheen of Carrie's luxury lifestyle, their daydreams becoming fodder for spinoffs, movies and a "Sex and the City" bus tour of Manhattan.

Funny thing about those mortgages, though.

Since the economy went to hell in a Hermés handbag, suddenly the fairy tale of a single sex columnist paying Manhattan rent is an affront, not an escape.

"Sex and the City" was engineered for a woman to see herself in Carrie's $600 shoes. Carrie was the one with insecurity, the one with humanity, the one you never saw topless. When things were good, we could buy it. We gazed up and fantasized about a better life in her rent-controlled apartment. Now that it's hard enough just hanging on to where we are, it's more fun to look below and see who's doing worse.

After Carrie sauntered off the air, a stampede of urban sophisticates tried unsuccessfully to cash in on the national mourning. The "Cashmere Mafia" got whacked after only one season and the rest were swallowed up by the "Lipstick Jungle" whence they came. Or so I've read -- I never watched them.

Then along came Lemon.

A successful writer, a Manhattan die-hard, a strong, intelligent woman holding her own in the city. And a complete mess.

For every time Carrie strutted through SoHo without tugging up her tube top, we have Liz Lemon, substituting a one-piece bathing suit for clean underwear. Where Carrie was glamorous, articulate and the toast of New York, Liz Lemon talks with her mouth full and drops Tostitos in her bra.

We envy one, empathize with the other. We wanted to be Carrie; Liz Lemon is who we feel like in comparison, the kind of woman who would stumble with self-consciousness walking around Manhattan in 6-inch heels.

All of our little feminine tics -- spasticity, jealousy, secret wearing of slankets and love affairs with cheese -- mush together like red sauce and meatballs on the sloppy sub that is Lemon. We love her because she's one of us, but we love her even more because she's even grosser, weirder and more awkward than we are. And whereas Carrie often wins her battles, Lemon typically loses. And when you yourself are losing -- your job, your house, your retirement fund -- what's better than watching an even bigger loser?

The way Carrie and Lemon work also underscores a change in the American audience, as employment became a sore subject for America after Carrie went off the air. Both women hold down successful writing careers, but the role of work in their lives is vastly different. Freewheeling Carrie spent a scene at her laptop here and there, but over six seasons, we never really saw her do much work. Her job was a narrative tool, a bookend that allowed her to put stories of love and friendship into a neat little package before going to bed at night.

Lemon, on the other hand, is her work. She has no friends outside the office. When a sexual harassment suit gets her barred from 30 Rock for a few weeks, she comes undone and nearly joins a female fight club. If Lemon's work was wrapped up in a package, it would be the greasy, unmarked, ticking kind under a bench on the subway platform.

Carrie and Lemon may be variations on the same theme, but to us, they mean different things. Carrie is gloss and Lemon is grit; Carrie is indulgence and Lemon is diligence; Carrie is the foolhardy invincibility that broke us, Lemon is the hard work that's going to krazy glue us back together.

So I wonder what the response will be when "Sex and the City" reemerges next week. Does Carrie still have a place in recession America? Or will she land in Manhattan to find that all that's left of her following is a legion of Lemons, fumbling with the water cooler in our slankets?

Molly Marie Griffin is a writer and blogger in Washington, D.C. She blogs at Year of Solitude.

Molly Marie Griffin is a writer, blogger and cheese enthusiast in Washington, D.C.