Current limits on debt and deficits are backed up by heavy fines, but they were never actually imposed 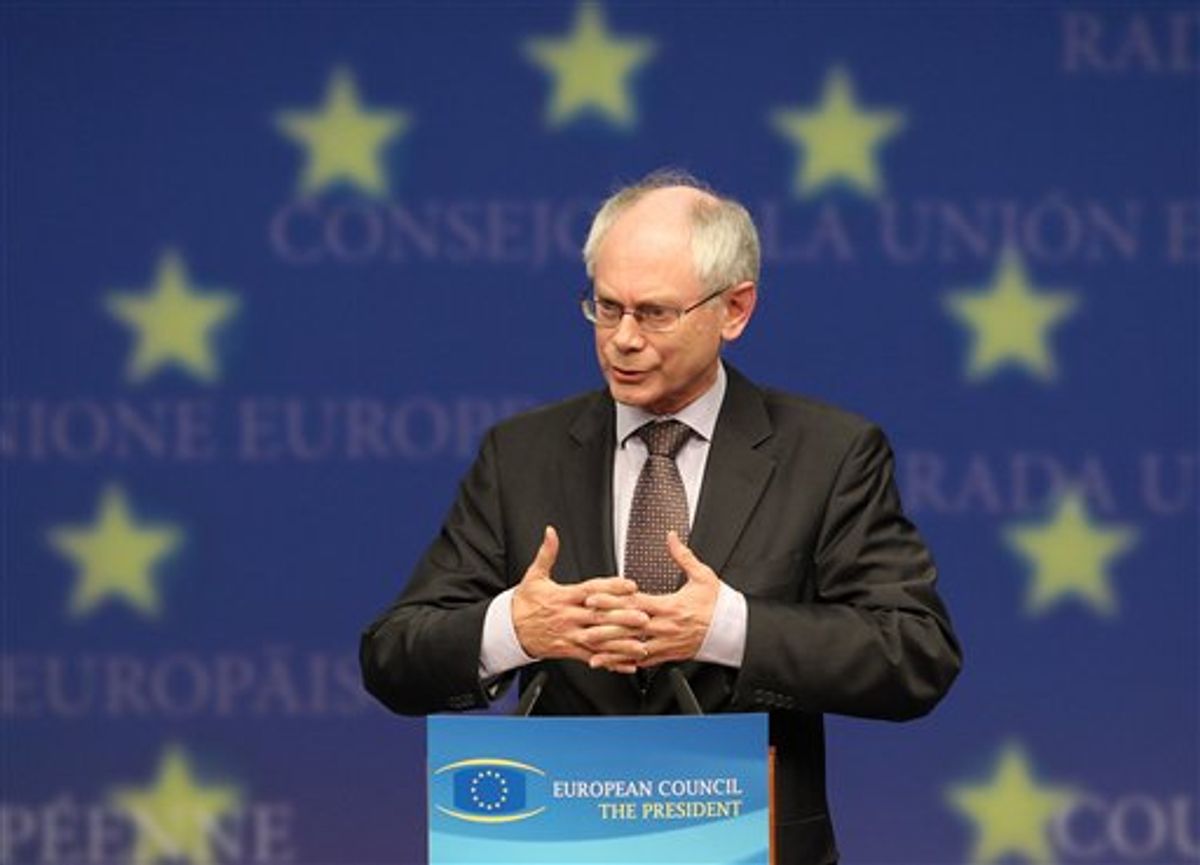 European Council President Herman Van Rompuy addresses the media at the European Council building in Brussels, Friday, May 21, 2010. European Union finance ministers on Friday started laying out new, tougher rules for their public finances in the hopes of winning back market confidence and preventing a repeat of the debt crisis that is threatening the euro. (AP Photo/Yves Logghe) (AP)
--

European Union finance ministers backed tougher sanctions to prevent them running up too much debt in the hopes of winning back market confidence and getting a handle on the debt crisis that is threatening the euro.

The European Union's president Herman Van Rompuy said the talks Friday showed that "it was very clear that there was a broad consensus on the principle of having sanctions" -- both financial and political.

Current limits on debt and deficits are backed up on paper by heavy fines, which have never been imposed -- effectively allowing Greece and others to ignore them and build up massive debt.

Van Rompuy gave no details of new sanctions because officials from the EU's 27 governments, the European Central Bank and the European Commission are only starting work on changes to widely flouted EU budget rules. EU leaders are due to decide on long-term reforms at an October summit.

Germany, which is providing the largest chunks of bailout funds for Greece and the eurozone, is keen on harsher punishments for countries that break the rules to deter them from seeking financial rescue such as such as stripping EU governments of voting rights or development funds or even ejecting them from the euro currency.

Van Rompuy indicated that he was opposed to the changes Germany has called for. Such changes to EU treaties would require each country to amend its national law -- a painful and lengthy process that could be rejected by national parliaments or voters.

"We must work as far as possible within the framework of the current treaties," he said, because it "allows us to work far more rapidly."

German Finance Minister Wolfgang Schaeuble said there were no takers for his idea of setting out how a country would go bankrupt, an "orderly default" that could assure investors by spelling out how much they could expect to lose on government bonds.

"Everything is on the agenda," he told reporters. "We should do what we can do very fast."

Earlier, Europe's main three indexes were nursing hefty losses once again but a better than expected performance on Wall Street helped ease the selling pressure -- the Dow Jones industrial average was up 75.12 points, or 0.8 percent, higher at 10,143.13 while the broader Standard & Poor's 500 index rose 11.19 points, or 1 percent, to 1,082.78.

Schaeuble told lawmakers in Berlin that the country had to make the rescue package a reality "because markets will only trust when it is actually in effect."

France is due to vote on the eurozone bailout by May 31 but neither Spain or Italy have set a deadline to authorize it. Along with Germany, these nations will provide the bulk of the package.

Friday's meeting will be followed by more talks on June 7 in Luxembourg that will draft a range of reforms for EU leaders to choose from in October.

But economists say that convincing action to reduce debt is the next needed step after the bailout loan package, which can only add more debt.

Germany has pushed hard for aid to debt-laden European countries to be coupled with requirements to bring down deficits. Under pressure, Spain and Portugal have promised to move faster to reduce the difference between how much their governments earn and spend.

EU officials have warned that other eurozone countries with large deficits -- such as Ireland -- may have to do the same.

Outside the eurozone, Britain has also promised to lay out big budget cuts next week. British treasury chief George Osborne said he wanted "to show that we are serious about living within our means."

"Britain has the largest budget deficit in the EU and I'm very conscious of that and that's why in Britain we're going to accelerate the reduction of that deficit," he said.

Associated Press writers Robert Wielaard and Raf Casert in Brussels, Geir Moulson in Berlin and Pan Pylas in London contributed to this story.