Bring on the female footballers 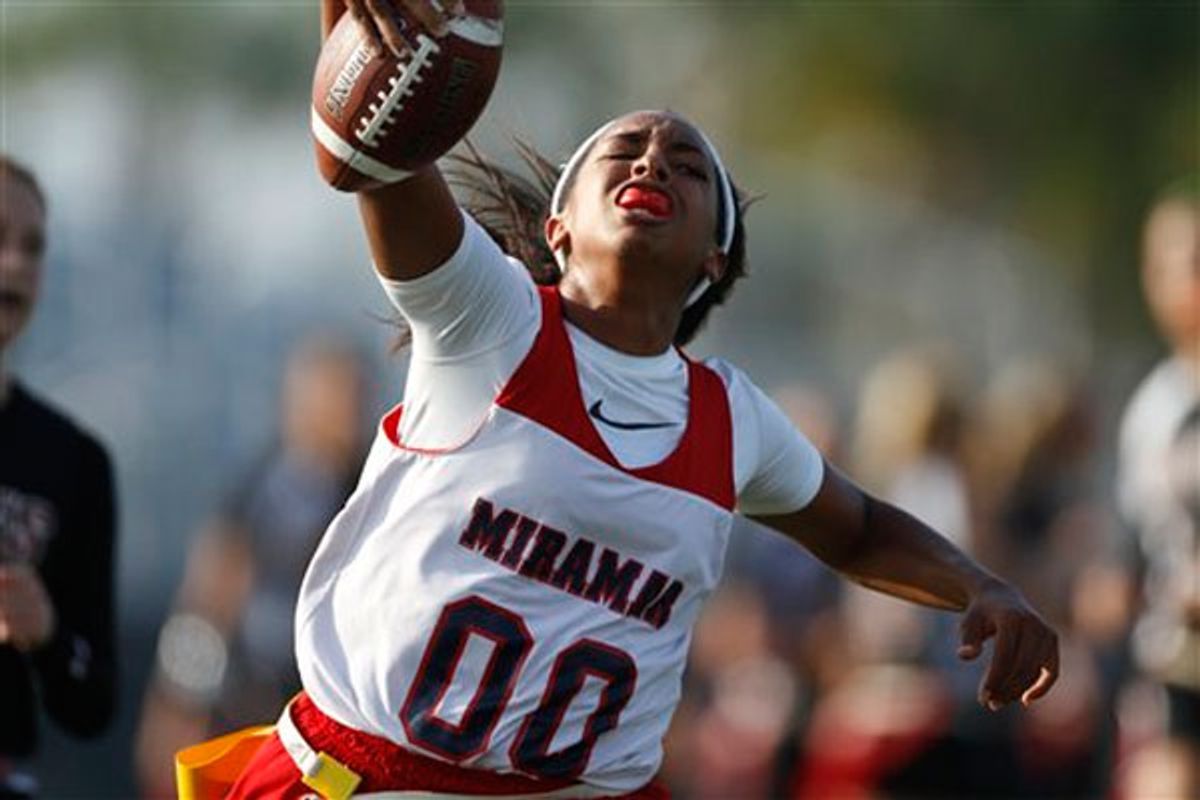 Miramar quarterback Chelsey Walsh stretches for yardage during the quarterfinals of the state high school flag football championships against Douglas in Boca Raton, Fla., Friday, May 7, 2010.
--

It happened once a year at my high school, during homecoming week: the "powder puff" game, where female students were permitted on the football field to play ball under the glare of stadium lights. It was the freshman-senior team versus the sophomore-juniors. While technically it was supposed to be a somewhat goofy flag football game, most of us showed up to play. Not watch. Not cheer. Not serve as filler in a pickup game dominated by guys. Play. We pushed and ran and threw and caught. I personally delighted in both giving and getting bloody noses on those chilled, fierce October nights.

So I am not one bit surprised to hear that girls in Florida are embracing the chance to play football. There, flag football is a varsity sport for female students. Florida was the first state to take the game to that level a decade ago. (Alaska is the second, and the only other one.) It was initiated when the state realized that there was a gender imbalance in athletic participation among students. So it asked potential athletes what they wanted to play. Field hockey, lacrosse, water polo, badminton? No. The girls chose flag football. Now, nearly 5,000 female students in Florida are on the field each spring to run plays in hopes of a state championship.

Which sounds wonderful — except that, according to the New York Times, critics call flag football a dead-end sport, since nearly no leagues for women exist at the college or professional level, flag or otherwise. Among these critics are feminist organizations like the National Women's Law Center. Neena Chaudhry, the NWLC senior counsel, is quoted in the Times as questioning how gender equitable it is for schools to offer the same number of sports for male and female students if not all of those sports offer any hope of scholarships and future play. Florida, after all, does not have any varsity sports for boys that have no counterpart beyond high school. Champions of girls' flag football, however, defend it on the simple grounds that the girls like to play.

Which in my mind should raise the question: If girls like to play it, why the hell aren't there more serious football leagues for women, at every level? Most high school girls are only offered the chance to play "powder puff" football once a year, a name that rings of '50s-style condescension. While the girls might meet this game with enthusiasm and ability, it doesn't seem to inspire anyone to propose more developed opportunities for girls to get out and bloody each other's noses. Instead, it remains stuck in a once-a-year "opposite day" rut. Girls at my school didn't even get to play football in gym class.

And another thing: What's up with the flags? I have nothing against flag football — I'd gladly play and watch it, and I know firsthand that it can get quite physical. But I wonder why even in Alaska and Florida, where girls get a chance to participate in football, there remains a disinclination to play it as a full-contact tackle game. Perhaps its due to a lingering suspicion that girls are more fragile, or more reluctant to hit. To that, I not only cite my bruised and grinning high school "powder puff" football teams, but I point to the fierce players of the Women's Football Alliance, a full-contact professional league inaugurated just last year, which boasts 41 teams in two conferences and six regions. It is now in the thick of its second season, with about 15 games played each week between the likes of the Detroit Dark Angels, the San Diego Sting, the Iowa Thunder, and the Houston Power. Three more expansion teams will be added next year. Meanwhile, there's the Independent Women’s Football League, another full-tackle league founded in 2000 with more than 1,600 women playing on 51 teams across North America.

Anecdotally, and by the numbers, it seems clear: Women and girls like to play football. When is someone going to tap the NCAA on the shoulder and let them know? What is it going to take for high schools in more states to allow the girls to get on the field and get dirty — more than once a year?