How can the "Lost" finale not suck?

Given the wretched good vs. evil puppet show we've endured lately, isn't the biggest finale ever doomed to fail? 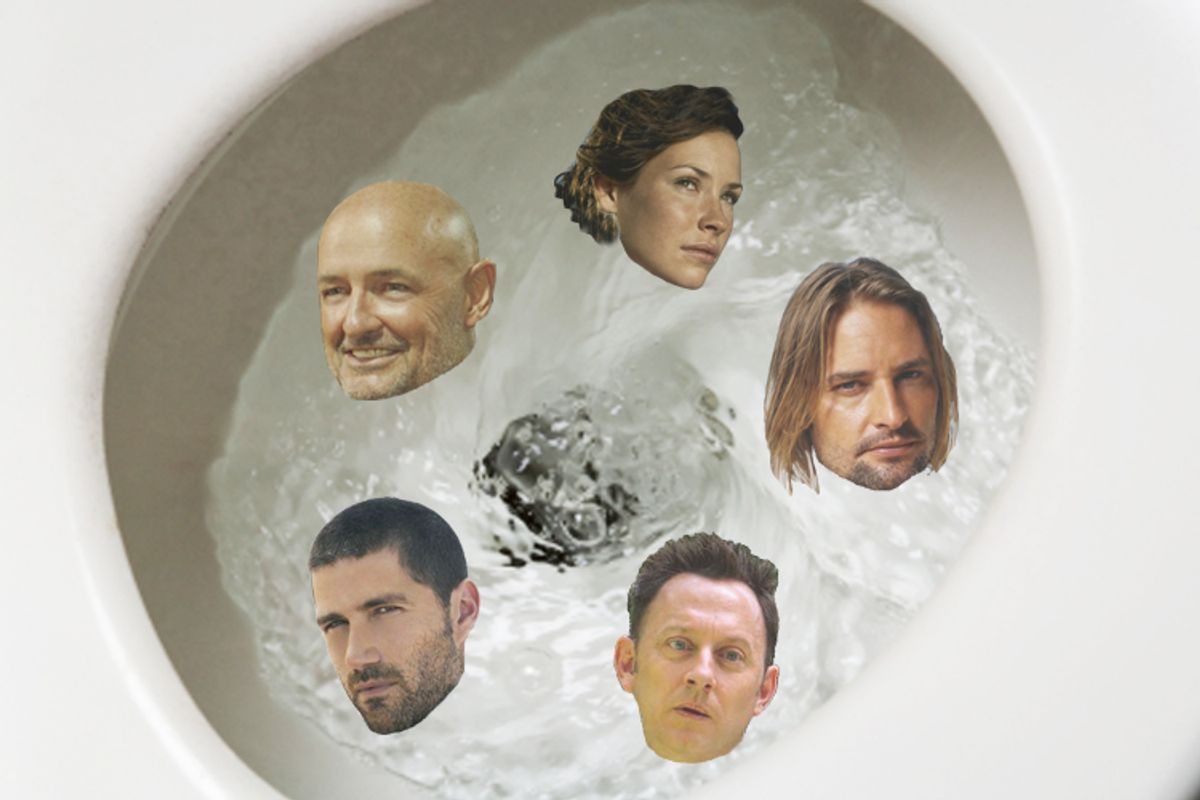 The world is filthy with big, unanswerable questions: Why do former frat boys tuck their golf shirts into their Dockers? Why are blended coffee drinks almost uniformly too sweet? Why don't Catholics spread a little cheese on those water crackers they serve at church? ("This is the Body of Christ… with a little aged gouda smeared on top.") And the biggest question of them all: How is it possible for the finale of "Lost" not to suck?

Just as the Western world was destined to be disappointed in Obama after his earth-shaking, groundbreaking, glorious, hope-encrusted parade to the White House, the world's peoples are doomed to be crestfallen and unruly when the last stupid moments of "Lost" flash across their screens. Personally, unless that glowing light energy at the center of the island flows straight out of my TV screen and into my body, blessing me with the purest, sweetest sensation of joy and fulfillment in the known universe (and since I don't currently have any narcotics dealers on speed dial, this seems unlikely), I'll be disappointed.

But it's not my fault that I need for Carlton Cuse and Damon Lindelof to channel a giant ray of healing light right at their audience. They're the ones who drafted luminous character studies in the first season, only to let them all peter out into flaccid, repetitious puppetry and clichés. They're the ones who broke all of the laws of time and space and turned to Deus Ex Machina and brought characters back to life over and over again, and did it all with the casual carelessness of something lighting up a cigarette in a baby's nursery. They're the ones who gave us emotionally vivid storytelling in the first season, segued into shocking twists and political theory metaphors in the second season, tumbled headlong into leaky love stories in the third, resorted to the macho posturing of a Steven Segal movie in the fourth, and smoked drugs and burned down the whole stinking house in the fifth and sixth.

And all of that would be fine, really, if not for the fresh insults of the final episodes of this final season: Two babies are born, then mommy's beautiful head is smashed in! The baby boys grow up to so different! There is light and energy at the center of the island, and one of these boys shall protect it from… mankind? Locke? The smoke monster? Crappy TV writers who have to keep stroking their half-dead golden goose so their kids can stay in that overpriced private school where all of the first-grade teachers have PhDs in child development?

Who knows? I'm just annoyed that this whole limp story boils down to a Judeo-Christian morality play between good and evil. Locke, so eeeevil! Ben, also not nice! Jacob, good and pure. Or secretly eeeevil? This premise is about as intriguing as the premise of "Austin Powers: The Spy Who Shagged Me," except without the cool outfits, cheesy puns and groovy dance sequences.

On the other hand, extended annoyance starts to curdle unexpectedly into giddiness after a while. Somehow, even though I know it will be flatly awful, I'm anxiously awaiting the Big Dumb Ending more than ever. I can't wait to see what thoroughly crappy resolution they have waiting for us. Will Locke's skin melt away to reveal a devil face? Will Jack die a gory death trying to defend The Light from the forces of smoke monsterdom? Why do I suspect that all of the original passengers on Oceanic 815 will reunite and give each other big bear hugs? Why do I think that there will be two different endings, wrapped up together in one stupid ending burrito, a gastrointestinal plot bomb of catastrophic proportions?

How do we know it's going to suck so spectacularly?

Seriously, what do you think will happen? Let's all write our predictions down here, and compare. No spoilers, though! Just guesses. (Extra credit points for really entertaining guesses.)