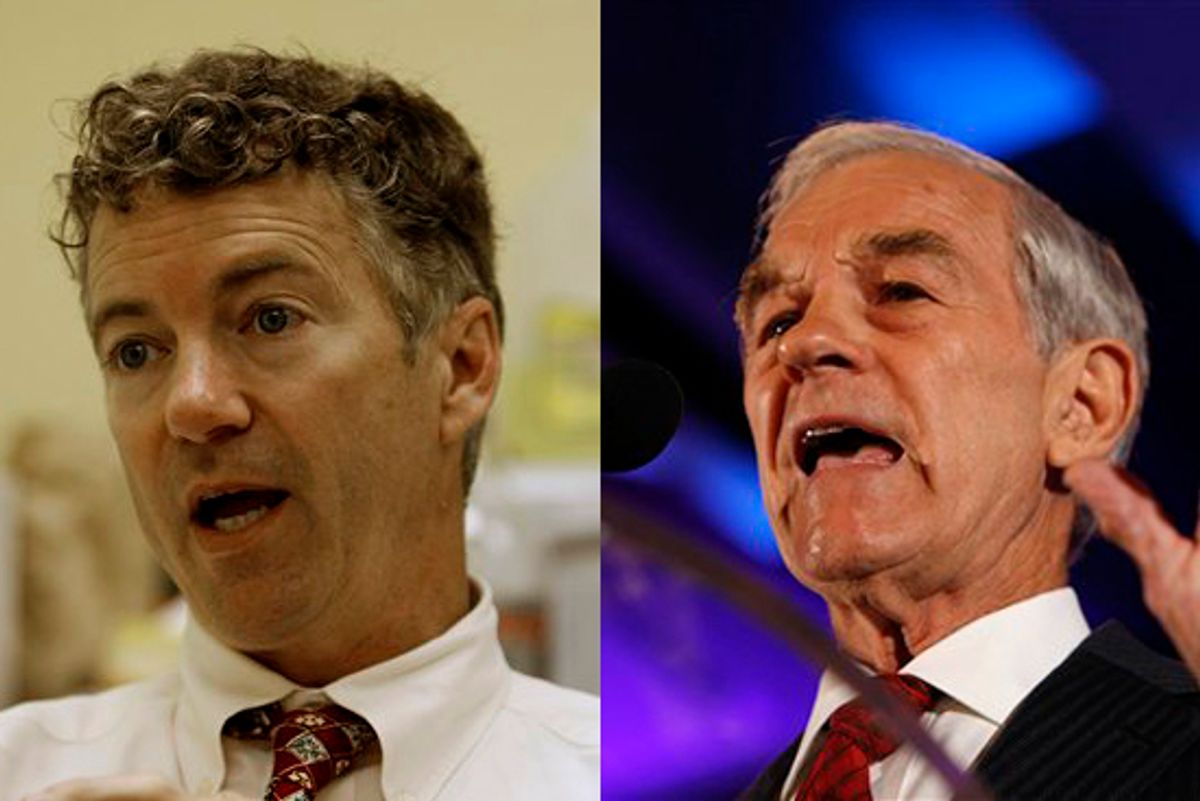 To understand Rand Paul's agonized contortions over America's civil rights consensus, let's review the tainted pedigree of the movement that reared him. Specifically, both the Kentucky Republican Senate nominee and his father, Ron Paul, have been closely associated over the past two decades with a faction that described itself as "paleolibertarian," led by former Ron Paul aide Lew Rockwell and the late writer Murray Rothbard. They eagerly forged an alliance with the "paleoconservatives" behind Patrick Buchanan, the columnist and former presidential candidate whose trademarks are nativism, racism and anti-Semitism.

Repeatedly during Ron Paul's political career, his associates used the same kinds of inflammatory rhetoric used by Buchanan in order to attract support and raise money, all while Paul himself pretended not to know what they were doing and saying in his name. Paul could always cover himself by saying, just as Rand Paul says now, that his opposition to civil rights statutes is purely constitutional and has nothing to do with bigotry.

The last time that anyone examined the details of the Paul family's gamy history was back in 2008, when the New Republic dug up copies of newsletters sent out under Ron's name to raise money, and found that they were replete with ugly references to blacks, Martin Luther King, homosexuals and other targets of the racist far right. At the time, Reason magazine, a libertarian magazine that opposed the "paleo" deviation, gave the most revealing account of its movement's degenerate element in a long article by Julian Sanchez and David Weigel.

Following Ron Paul's dismal performance in the 1988 presidential campaign as the Libertarian Party candidate, Rockwell and Rothbard "championed an open strategy of exploiting racial and class resentment to build a coalition with populist 'paleoconservatives,' producing a flurry of articles and manifestos whose racially charged talking points and vocabulary mirrored the controversial Paul newsletters" uncovered by the New Republic. Rothbard died in 1995, but in 2008 Rockwell was still at Paul's side as a top advisor, "accompanying him to major media appearances; promoting his candidacy on the LewRockwell.com blog; publishing his books; and peddling an array of the avuncular Texas congressman's recent writings and audio recordings."

According to Sanchez and Weigel, the tone of Paul's newsletters shifted to reflect his political circumstances. Between his first presidential campaign and his return to Congress in 1996 as a Republican, they were filled with slurs against blacks generally and Martin Luther King Jr. in particular, including the accusation that the civil rights leader "seduced underage girls and boys." Rothbard hated King deeply, describing him in November 1994 as "a socialist, egalitarian, coercive integrationist, and vicious opponent of private-property rights ... who was long under close Communist Party control," and concluding that "there is one excellent litmus test which can set up a clear dividing line between genuine conservatives and neoconservatives, and between paleolibertarians and what we can now call 'left-libertarians.' And that test is where one stands on 'Doctor' King." (Then again, he hated Lincoln too, whom he disparaged in the same essay as "one of the major despots of American history.")

This offensive drivel was calculated to wring contributions from a narrowly targeted segment of the population. The Reason story quotes Ed Crane, longtime president of the Cato Institute, recalling a discussion with Ron Paul about the most fertile source of direct-mail contributions to his campaign: the mailing list of the Spotlight, the anti-Semitic national tabloid published by the "populist" Nazi sympathizer Willis Carto.

Both Rothbard and Rockwell wrote of their strategy for a "right-wing populism" that would bring "the rednecks" into the libertarian movement. In an essay that appeared in their own joint newsletter in January 1992, Rothbard cited Joe McCarthy and David Duke, the openly racist former Klan leader, as "models" for this approach. (According to Sanchez and Weigel, a 1990 issue of the Ron Paul Political Report discussed Duke and his movement "in strikingly similar terms.") This new movement would seek to mobilize an alienated white middle class against wealthy East Coast elitists and the "parasitic Underclass" spawned by liberal policy -- identified clearly enough in a regular newsletter feature called "PC Watch," which featured news items about "interracial sex" and "thuggish black men terrifying petite white and Asian women."

As for policy, the paleolibertarians advocated lower taxes, abolishing welfare, and "elimination of the entire 'civil rights' structure, which tramples on the property rights of every American" -- a sentiment that Rand Paul echoes in alluding to the right of private businesses to practice racial discrimination.

In 1992, Ron Paul joined with Rothbard and Rockwell to support Pat Buchanan's insurgent primary candidacy against the incumbent Republican President George Bush.  (Buchanan returned the favor in 2008.) "We have a dream," wrote Rockwell, "and perhaps someday it will come to pass. (Hell, if 'Dr.' King can have a dream, why can't we?) Our dream is that, one day, we Buchananites can present Mr. and Mrs. America, and all the liberal and conservative and centrist elites, with a dramatic choice ... We can say: 'Look, gang: you have a choice, it's either Pat Buchanan or David Duke.'"

No wonder Sanchez and Weigel concluded with a forthright condemnation of Ron Paul's dishonesty on race. "Ron Paul may not be a racist," they wrote, "but he became complicit in a strategy of pandering to racists." The same polite formulation could be applied to the hard-line activists behind the Goldwater campaign in 1964, or the "Southern strategists" of the Nixon White House, or the "populist conservatives" of the George Wallace campaign, many of whom still remain active on the right today.

Despite the persistent efforts of Buchanan, Rockwell and many others on the far right, their deranged "dream" of political advancement through racial conflict never developed into a full-scale national nightmare. Instead, King's dream has since drawn closer to fulfillment with the election of Barack Obama. But the profound resentment of the first black president symbolized by Rand Paul and his Tea Party supporters arose from an old political fever swamp that has never been drained.