In "Solitary Man," the actor plays another in a long line of cads who are more interesting than they are likable 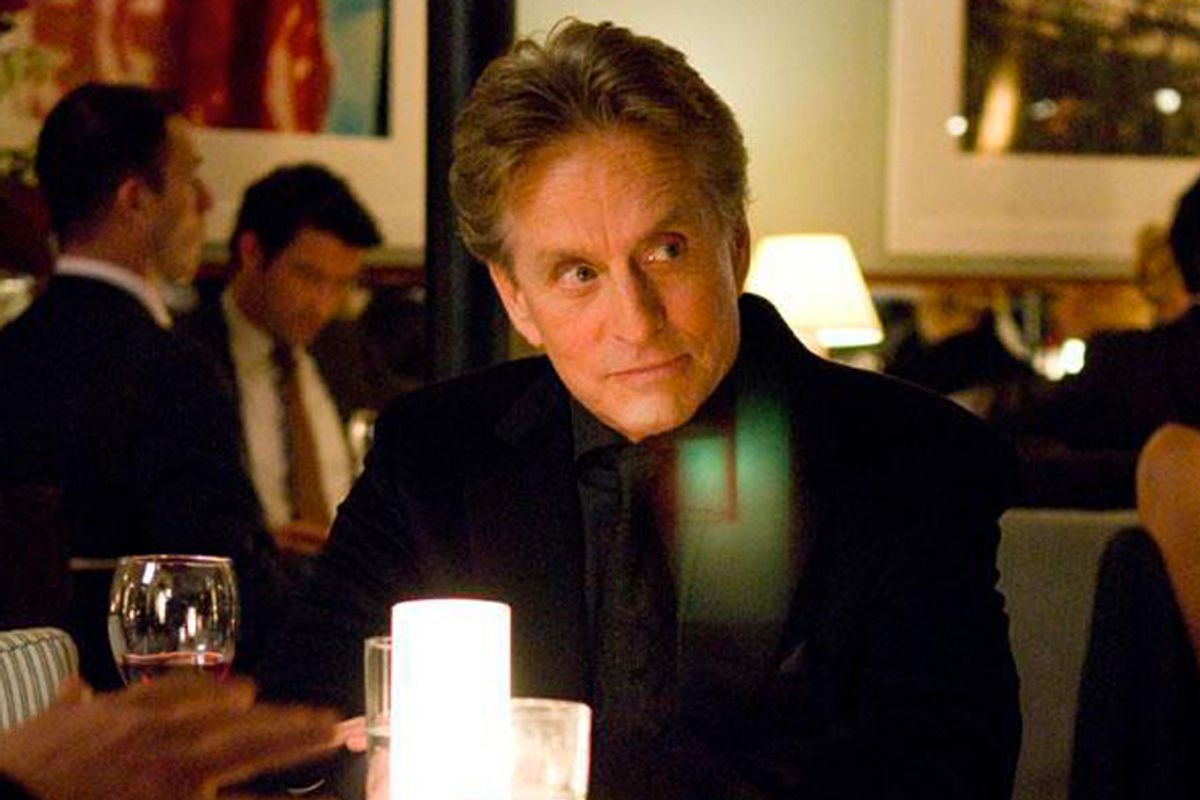 "There is nothing noble in failure," says Ben Kalmen, the protagonist of the dark comedy "Solitary Man." And he knows whereof he speaks. Ben is a disgraced former used car dealer and insatiable womanizer who once had all the outward trappings of success (stable marriage, lots of money, a degree of celebrity), and mysteriously and systematically began to destroy all of it. By the time the film's main action begins, he's a magnificent wreck of a man who's slowly learning that the world isn't responsible for his misery – he is.

Happily, Ben's dictum about failure doesn't apply to movies. Failure itself isn't noble or heroic or innately interesting; it's just a human condition like any other. But because mainstream American cinema tends to cower in fear of any behavior it considers unsympathetic and any circumstance it considers unhappy, a film about failure possesses a small degree of nobility right out of the gate. You just don't see that kind of film every day. What such a movie does after that is, of course, up to the filmmakers and the actors. Luckily, "Solitary Man" is funny and absorbing, and it features a lead performance by Michael Douglas that's both hugely entertaining in itself, and fascinating for the way it illuminates the actor's long, colorful career. Ben Kalmen isn't just a worthy addition to Douglas' personal rogues gallery; he seems to contain bits and pieces of all of them.

The movie picks up with Ben, now divorced from his wife, Nancy (Susan Sarandon), living a pathetic shadow of his former life. He still carries himself like a Master of the Universe (and think of how much more watchable "The Bonfire of the Vanities" would have been had Douglas played Sherman McCoy), but the more time we spend with him, the more we realize that Ben's aura of imperviousness is just a performance. Ben's chronic infidelity destroyed his marriage, and at age 60, his capacity for talking much younger women into bed seems less a gift than a manifestation of his deep immaturity, depression and fear of death. (It's not the women he's after, it's his own rosy memories of youthful potency, and he doesn't seduce these women with sheer charm, but by choosing targets that have daddy issues and exploiting them.)

Ben lost his string of car dealerships in a stupid criminal scam. He's living beyond his means and has to keep borrowing money from the handful of people he hasn't completely alienated. One of them is his 30-something daughter, Susan (Jenna Fischer), who wants the old man to be a decent grandfather to her son, Scotty (Jake Siciliano), and knows he has it in him. But Ben takes advantage of her good nature, and his grandson's, too. The sequence in which Ben shows up late for Scotty's birthday party -- loping toward the family car as it's being loaded up, and grinning as if his belated presence is the greatest gift of all -- is every parent or grandparent's nightmare of fraudulence and inadequacy packed into one agonizing moment. (The only similar scene that's half as devastating is the bit in Clint Eastwood's "True Crime" in which the workaholic hero packs his preschool-age daughter into a stroller and pushes her through a zoo at breakneck pace so that he can get back to the office faster, and convinces the poor girl it's a marvelous experience by calling it "speed zoo.")

If Ben's magnificent ruin of a life weren't so astutely observed -- and if Douglas didn't let you see every flicker of vanity, delusion, arrogance, introspection and shame that passes through the character's mind -- Ben's plight and the movie would be unbearable. But writer-director Brian Koppleman and his co-director, David Levien (they co-wrote the scripts for "Rounders" and "Oceans 13"), hit the right tone early -- empathetic yet brutally honest -- and Douglas' absorbing, minutely detailed performance sustains it. (He's given Ben some distinctive verbal and physical tics -- such as the aggressive, borderline-violent way he jabs people when he's trying to sell them something, and getting excited by the act of selling -- but he never highlights them, much less demands that we appreciate their cleverness. They're subtle, and feel tossed-off.) "Solitary Man" is as warm as a comedy about a screw-up can be without resorting to special pleading. The film never asks us to rationalize Ben's awesome selfishness; remember, he didn't receive a frightening diagnosis, he deliberately avoided receiving it, as if he wanted an excuse to act out anyway and didn't want to complicate the process by dealing in facts.

The script is careful to distinguish between Ben's view of himself and the movie's view of Ben -- an important difference that too many films about charismatic, badly behaved characters either fail to delineate or purposefully fudge. The most revelatory scenes in the movie are the ones in which Ben's friends and relatives puncture his delusion that his self-absorbed way of life is a highly evolved, uncommonly brave kind of individualism, and that anyone who doesn't live that way is a philistine or a coward. Following an ill-advised one-night stand with one of his daughter's friends, Ben practically drives the poor woman from his bed with his needling, insensitive observations, then defends his behavior by saying that he just decided one day to say whatever popped into his head and anyone that couldn't handle it could hit the bricks. (The world contains many varieties of asshole, but the very worst is the kind that's rebranded himself a righteous truth-teller.)

The supporting characters aren't just there to absorb his punishment. They're representatives of value systems – some close to Ben's, others thankfully far removed. As played by Sarandon, Ben's ex-wife isn't a doormat; she's a loving woman who barely recognizes the man she married and wishes that man would return but knows it'll happen slowly, if at all. Jenna Fischer's Susan is still in thrall to her father; from the way that he regales her with inappropriate details of his love life, one surmises Ben once presented himself as less of a father to her than a best friend who happened to share half her DNA. Now Susan is more mature than he is -- more evolved. It pains him to be reminded of this, just as it hurts when younger women who initially seem intrigued by his randy energy hear him addressed as "Grandpa" and flash that condescending, "Aren't you cute?" smile.

On the other end of the spectrum we have Ben's sexy, slightly brittle girlfriend Jordon (the always remarkable Mary-Louise Parker, letting you know who her character is just by the way she holds a glass or folds her legs under herself on a couch). She's the lover Ben deserves, a cool materialist, bruised by life and cynical about everything. Her teenage daughter, Allyson (Imogene Poots), is a younger, female version of Ben -- not soulless yet, but getting there. Their inevitable, "Are they going to go there? Dear God, they went there" tryst during a college campus visit would be revolting if both characters hadn't been established as cheerful heels, and if Allyson's rope-a-dope approach to seduction wasn't so clearly in the tradition of Michael Douglas movies about men who think with the wrong head. And when Allyson shares the same frame with her and Ben's campus guide, a likable, kindhearted boy named Daniel Cheston (Jesse Eisenberg, who has the second most expressive stammer in movies, after Jeff Goldblum), the visual and moral contrast is so stark that it almost amounts to a sight gag.

Towering above (or is that sinking beneath?) the rest is Douglas, maybe the last remaining link to an era when actors could play characters that were interesting rather than likable and still appear in big movies. He's at his best playing human steamrollers undone by hubris or unexamined illusions (sometimes both). The power-mad corporate raider Gordon Gekko in "Wall Street"; the impulsively cheating husband in "Fatal Attraction"; the newly divorced man in "War of the Roses" who holds onto his dreams of a perfect marriage by refusing to give up his stake in the family house; the super-macho police detective undone by his animal cravings in "Basic Instinct"; the laid-off angry white man rampaging through a multicultural Los Angeles in "Falling Down"; the aging, one-hit wonder novelist in "Wonder Boys," self-medicating his depression with pot and nostalgia: To one degree or another these characters are all opportunists, screw-ups or some combination. And there's not a saint among them.

Douglas is a '70s-style antihero whose star rose a decade late. In a decade-plus of American film defined by Rocky, Rambo, "Top Gun" and umpteen films staring Arnold Schwarzenegger and his guns, Douglas insisted on playing recognizable men who lived in something vaguely resembling the real world. Even during the peak of Douglas' fame (roughly 1985 to '95) you never caught him being photographed with Vaseline on the lens, like Warren Beatty in that godforsaken remake of "An Affair to Remember" or Robert Redford in, well, everything post-"Brubaker." (He's more a Jack Nicholson type of performer, but without Jack's tendency to go cartoonishly over-the-top.) He didn't act opposite robots or space creatures or spend a lot of screen time leaping into the air unloading handguns. (One notable exception is Ridley Scott's glossy-trashy, America-vs.-Japan thriller “Black Rain." But even there Douglas managed to make a standard-issued, ass-kicking Yankee cop seem human-scaled -- socially inept and insecure, a prisoner of machismo.) Even when his characters are misunderstood or persecuted, the actor never models a halo. In the ludicrous conversation piece "Disclosure," in which Douglas' character is sexually harassed by Demi Moore's ruthless Amazon boss, the actor makes sure we know his character is still a sinner, even if he's being sinned against, and he's not smart enough to see the larger puzzle of which his torment is one small piece.

Douglas' characters are always guilty of something. When D-Fens, the hero of "Falling Down," finally has his epiphany on a dock, it's phrased as a question: "I'm the bad guy?" Douglas' most memorable characters could all pose that question to the audience, and by all rights the response should be the same: Yes, absolutely – and don't go changing.