Stop name-calling, admirers ask, and focus on what the movement wants to do! That's happening, and it isn't pretty 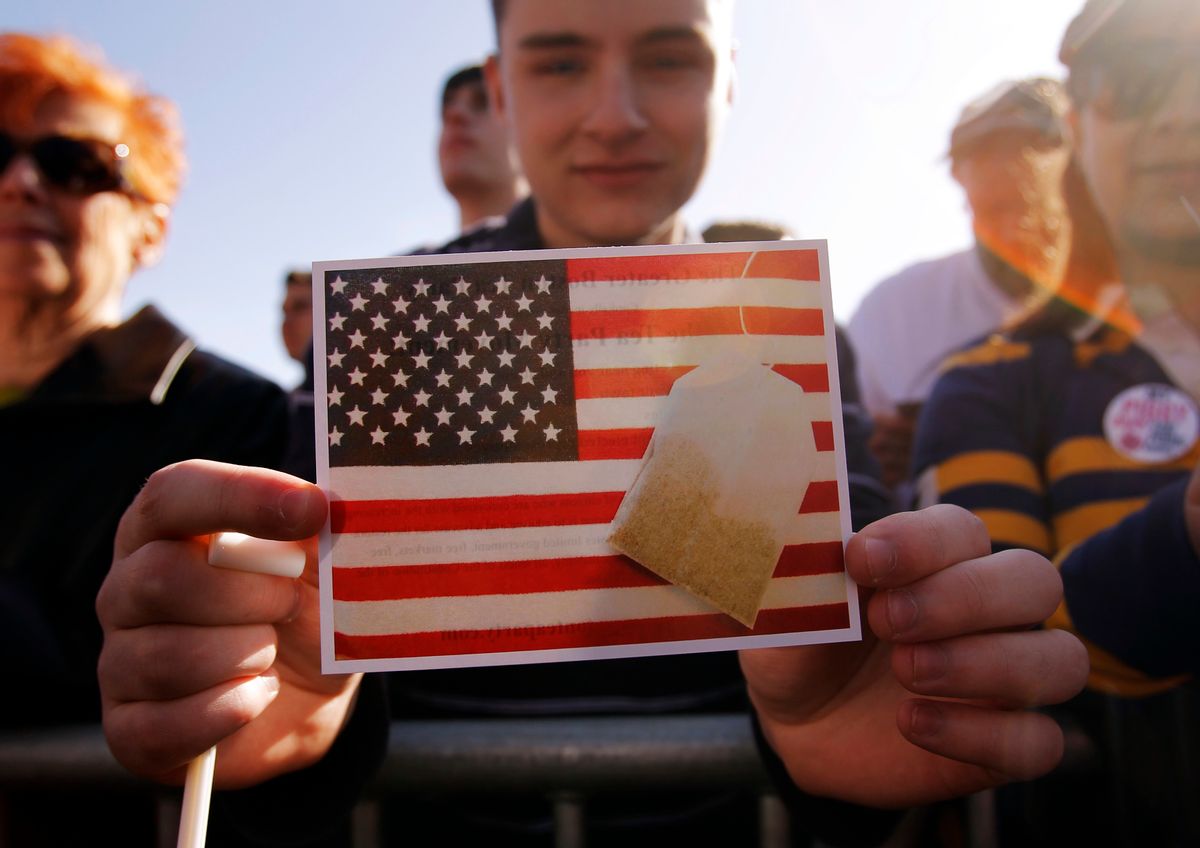 I've gotten into little spats with Reason columnist Cathy Young and the Wall Street Journal's James Taranto recently about my attitude toward the Tea Party movement. Their big complaint is that I've focused too much on the Tea Party's alleged racism, and not enough on what it wants to do.

That may be fair. But in my defense, it's been hard to know exactly what the Tea Partiers want to do. Cut taxes? President Obama did that. From the left, my friend Robert Scheer published a slightly ill-timed homage to Kentucky GOP Senate candidate Rand Paul on Thursday, hailing the rise of Paul and others like him as a development that might help put the brakes on the corporate control of America. "What's wrong with cutting back big government that mostly exists to serve the interests of big corporations?" was Scheer's kind of rhetorical question. (I don't think there's broad agreement on the left that big government "mostly exists to serve the interests of big corporations.") Scheer rightly points to the positive alliance between Rep. Ron Paul, Rand's dad, and Sen. Bernie Sanders, a libertarian and a socialist, respectively, to audit the Fed. That's a good start.

But I don't see a lot of room for cooperation between left- and right-wing libertarians, or the Tea Partiers and left-wing critics of corporate control over the government. One problem, of course, is Rand Paul's controversial approach to civil rights. But I think it's potentially bigger news that he called President Obama "un-American" for criticizing British Petroleum over the Gulf oil spill, rather than merely saying "accidents happen." Unbelievably, he expressed similar feelings about a coal mining accident in his own state that killed two men. "We had a mining accident that was very tragic," Paul said. "Then we come in and it's always someone's fault. Maybe sometimes accidents happen."

Is that the Tea Party philosophy at work: "Accidents happen," people die, and private industry should be left alone, not even criticized, when they do?

I'm getting a little weary of people insisting journalists must pay homage to the Tea Party as a great infusion of political energy, and not call them racist, and examine their ideas with respect. As I've stated before, it is pretty clear from polling that the Tea Party is just another name for the traditional Republican base -- older, whiter, heavier on males and angrier than the rest of the country. Aside from their costumes and protests, I don't think they're that revolutionary or newsworthy. But OK, I'm willing to respect them. Respect means asking them what they'd do if they were in government, reporting on what they say, and letting the world know.

That's happening this week, and it's not going well for the Tea Party. Rachel Maddow is being trashed for asking Paul supposedly unfair questions, which is ridiculous; Maddow was tough but fair. But now the Kentucky Senate nominee is having problems with more than just Maddow. Friday afternoon, Paul pulled out of a scheduled appearance on "Meet the Press." "They just want to keep beating this same dead horse," said campaign manager David Adams. "We're finished talking about that."

Rand Paul, and other Tea Party candidates, are going to continue to have to answer questions about their political views. Maybe the end of that process will be that they win over the country to their approach to government, and Democrats are tossed out on their ears in November. I think the end result is more likely to be that most of the rest of the country is either mystified, or horrified, by their magical thinking about the free market. (They are now in danger of costing Republicans a couple of Senate seats, in Nevada and Kentucky, that should have been easy pickups in November.)

But either way, it's time for them to step up and tell us how they'd govern -- not whine about the pesky media.

In related news: In a new post headlined, "The Education of Joan Walsh," Taranto damns me with faint praise for my commitment yesterday to stop throwing around the term "racist." But he makes one point in the piece that is worth exploring. I'm still off about Paul and the Tea Parties, Taranto insists, because:

The tea-party movement focuses on spending, taxes and government encroachment in areas like health care. To criticize it for its adherents' allegedly retrograde views on race is bizarrely beside the point, like criticizing an antiwar protest for its participants' economically illiterate opinions about how to regulate the financial industry.

"Allegedly retrograde views on race" are "bizarrely beside the point" for a movement that seeks to "take back" our government? And Taranto gets to decide what's beside the point in Tea Party coverage? Wow. As I said, I'm not going to throw the term "racist" around anymore, but if you want a definition of "white privilege," you can start there.