GOP officials ponder how to help, and tame, Rand Paul

High-ranking Republicans are reaching out to Senate nominee. His MSNBC interview, they say, was a wake-up call 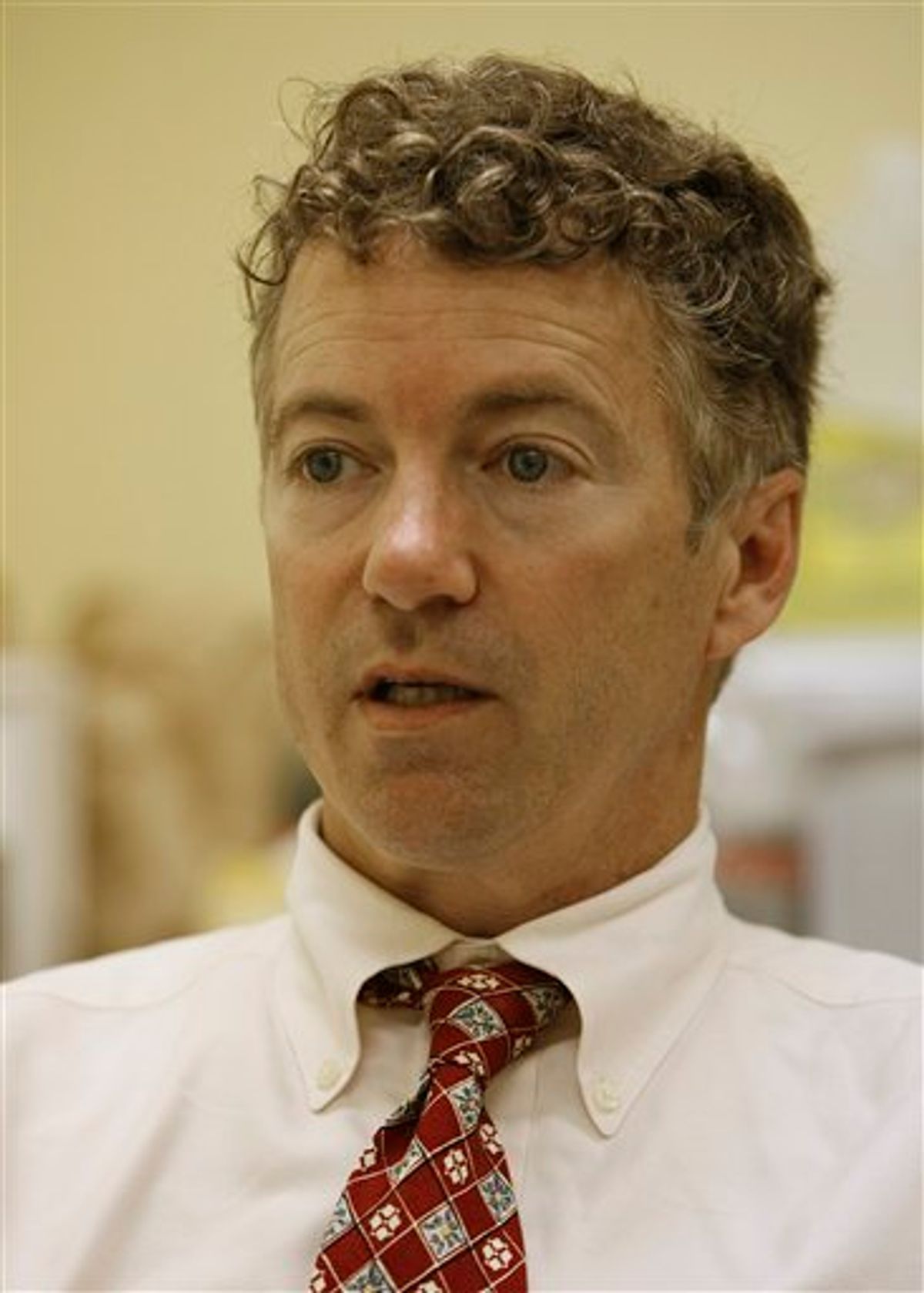 Those comments, on top of Paul's earlier suggestion that businesses should have the right to turn away racial minorities, sent gleeful Democrats into full attack mode while top Republicans pondered how to calm things down.

Paul, a favorite of the tea party movement, walloped Grayson in Tuesday's primary. Now, chastened GOP leaders are dealing with a novice and outsider who, feeling his oats, has expressed his robust libertarian views in a series of interviews that have caused political pros to wince.

High-ranking Republicans from Washington have quietly reached out to Paul and his aides, trying to start healing the breach and to nudge him toward greater campaign discipline, said three GOP operatives close to the situation.

The three, who would speak only on background to avoid antagonizing Paul and his supporters, disagreed on how the initial exchanges have gone. A Washington-based Republican official, who has spoken with Paul's campaign advisers, said the harsh national reaction to the nominee's MSNBC interview on Wednesday "was like a wake-up call" to his inner circle.

"They know they messed up" by allowing liberal show host Rachel Maddow to draw out Paul's thoughts on the 1964 Civil Rights Act, the official said. Paul told Maddow he abhors racial discrimination, but he also suggested the federal government shouldn't have the power to force restaurants to admit minorities against their will.

Another well-connected Republican official, based in Kentucky, said Friday that Paul is extremely self-confident and may resist advice to bring more experienced and mainstream GOP strategists into his circle.

"There's lots of chatter, 'we've got to get this guy some help,'" the official said, adding that he's not convinced Paul realizes the danger of saying yes to every interview request.

Washington-based Republican strategists hope to strike a balance. They'd like to persuade Paul to be more selective and disciplined in his remarks but not lose the freshness and candor that appeal to voters seeking a change in Washington.

"What I don't like from the president's administration is this sort of, 'I'll put my boot heel on the throat of BP,'" he said in an interview with ABC's "Good Morning America." "I think that sounds really un-American in his criticism of business."

Interior Secretary Ken Salazar told CNN on May 2: "Our job basically is to keep the boot on the neck of British Petroleum."

Other Republicans have criticized the government's handling of the oil spill. But few have been so vocal in defending BP, the company responsible for the deep well and offshore rig that exploded last month, killing 11 workers and spewing millions of gallons of oil.

Paul said BP has agreed to pay the costs of the cleanup and damage. "I think it's part of this sort of blame-game society in the sense that it's always got to be somebody's fault instead of the fact that maybe sometimes accidents happen," he told ABC.

He also referred to a Kentucky coal mine accident that killed two men, saying he had met with the families and admired the coal miners' courage.

"We had a mining accident that was very tragic," Paul said. "Then we come in and it's always someone's fault. Maybe sometimes accidents happen."

Mine safety advocate Tony Oppegard said it's premature to make such comments because the federal investigation of the Dotiki mine cave-in is not finished. "It's easy for him to say we look for someone to blame," Oppegard said, "but the fact is, this company had a horrible safety record."

Democratic groups, meanwhile, are issuing almost nonstop streams of Paul-bashing video clips, e-mails and statements. Paul is not just a Kentucky phenomenon, they contend, taunting Republican senators in Gulf coast states to say whether they agree with his comments about BP.

"Republicans have eagerly tried to claim the energy of the tea party, and with that -- as exemplified by Rand Paul -- they'll have to answer for a number of positions outside the mainstream," said Hari Sevugan, spokesman for the Democratic National Committee.

Citing a Kentucky poll showing Paul with a big lead over Democratic Senate nominee Jack Conway, several Republican officials said there's sufficient time to bring more discipline and discretion to the newcomer's campaign. A key step will occur Saturday, when McConnell, Paul and other state GOP officials meet privately and in public at a long-scheduled postelection "unity" event in Frankfort.

Associated Press writers Roger Alford in Kentucky and Michele Salcedo in Washington contributed to this report.