Fund manager: "The economic recovery story has started to look like a mirage" 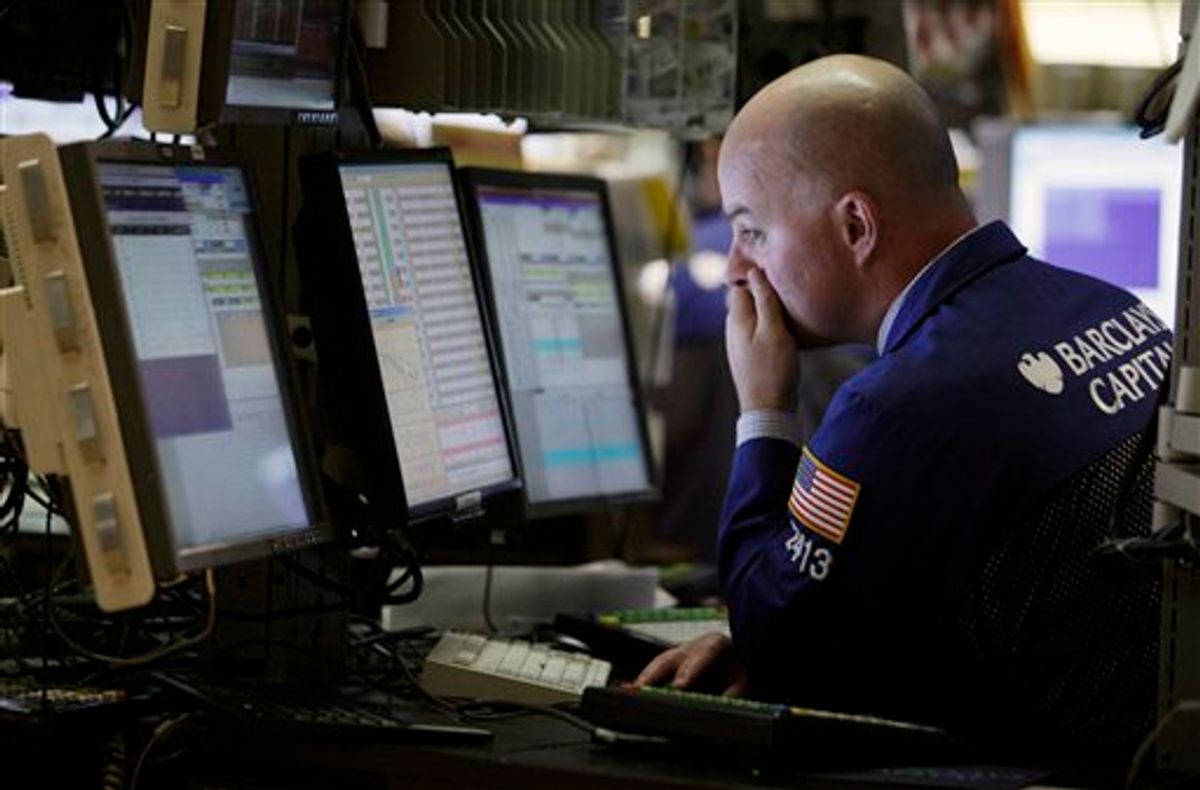 Stocks took their deepest plunge in more than a year Thursday as fears grew that Europe's debt crisis could spread around the world and undermine the U.S. economic recovery. The possibility has been brewing for weeks, but analysts said some investors are just waking up to it.

The Dow Jones industrial average fell 376 points, its biggest point drop since February 2009. All the major indexes were down well over 3 percent and are now showing losses for 2010. Interest rates fell sharply in the Treasury market as investors once again sought the safety of U.S. government debt.

The number of people applying for unemployment benefits last week rose unexpectedly and the Greek government's response to its debt crisis sparked new protests in Athens, but analysts said neither event appeared to set off Thursday's selling.

They said more investors seemed to be grasping the possibility that the U.S. recovery could be in jeopardy, and that many were realizing that the stock market's big rebound since March 2009 may not have been justified.

"The economic recovery story has started to look like a mirage," said Tom Samuels, manager of the Palantir Fund in Houston. "If that's correct, stock prices are well ahead of economic reality."

Investors are concerned that the debt problems in countries like Greece and Portugal will spill over to other countries in Europe, cause a cascade of losses for big banks and in turn halt economic recovery in the U.S. and elsewhere.

"It's starting to look like one of these tragic stories were one person falls through the ice, then everyone else rushes in to help and ends up drowning," independent market analyst Edward Yardeni said.

They're also worried that China might take steps that will limit its economic growth, which would also affect the U.S. recovery. Analysts said the market is vulnerable to rumors about any of the major economies right now.

The Standard & Poor's 500 was down almost 12 percent from its closing high for the year, which was reached April 23. Most analysts consider a drop of more than 10 percent from a recent high to be a "correction." This is the market's first correction since stock indexes hit a 12-year low in March last year. The fact it has occurred in just 19 trading days shows how anxious traders are right now.

The Chicago Board Options Exchange's Volatility Index -- known as the market's fear gauge -- leaped almost 30 percent to its highest level since March 2009. The increase in the VIX signals that traders are bracing for more drops in the market.

Analysts said traders were retreating from any investment thought to be too dangerous to own right now. That has meant heavy selling in stocks, commodities and troubled currencies like the euro.

Investors appear increasingly convinced that European countries will need to adopt stringent spending cuts to pay down their heavy debt loads, Yardeni said. Such cuts would likely lead to long economic slumps for those countries, a prospect that investors may now be accepting as reality as they sell stocks and the euro, the currency shared by 16 European nations, he said.

"The drop in the euro is the initial phase of a long-term, multiyear economic decline in Europe," Yardeni said. "It shows a declining confidence in the workability of the EU (European Union) monetary union, and that's why their stock markets are down."

At the New York Stock Exchange, only 153 stocks rose compared with 2,994 that fell. Volume came to a heavy 2.1 billion shares.

The dour market got some confirmation from a Federal Reserve official that Europe's problems could be a "potentially serious setback." Fed Gov. Daniel Tarullo said that if the debt crisis curbed lending and the flow of credit globally, that would endanger both the U.S. and global recoveries.

"Although we view such a development as unlikely, the swoon in global financial markets earlier this month suggests it is not out of the question," he said in prepared remarks.

A private research group, meanwhile, reported an unexpected drop in its index of leading economic indicators, a sign that growth could slow this summer. The Conference Board's index of future economic activity slipped in April for the first drop since the stock market's bottom last year.

As investors pulled out of stocks and other risky investments like commodities, they moved into safer investments such as U.S. Treasurys. The yield on the benchmark 10-year Treasury note, which moves opposite its price, fell to 3.22 percent from 3.37 percent late Wednesday.

Commodities prices fell as investors speculated that a weak world economy would curtail demand for raw materials. Crude oil fell $1.86 to $68.91 per barrel on the New York Mercantile Exchange.

Traders were trying to anticipate the scenarios that could occur as Europe struggles to contain its debt problems.

"There's a question out there now that potentially we could be talking about a collapse of the eurozone or countries breaking away from the euro," said Tim Quinlan, an economist at Wells Fargo & Co. As recently as four months ago, that wasn't even considered to be a possibility, he said.

Such a stark change in views has unnerved investors, but analysts said they weren't seeing signs that fear is sweeping the market.

"These are not panic losses," said Todd Colvin, a vice president at MF Global Inc. in Chicago. "These guys are taking some profits off the table and taking some capital where they know it will be safe. And where's that? That's cash or even Treasurys."

High unemployment remains one of the biggest obstacles to a sustained recovery in the U.S., and concerns about it grew when the Labor Department said new claims for unemployment benefits rose by 25,000 to 471,000, their largest amount in three months.

That came as an unpleasant surprise to investors who were expecting a slight drop. The latest report snapped a streak of four straight weekly drops and questioned the strength of the job market.

Greek workers, meanwhile, again took to the streets protesting recently approved budget cuts that were necessary for the country to receive a bailout. Greece was able to repay debt that came due Wednesday only because it had access to a rescue package from the European Union and International Monetary Fund.