The debate over "Is he a racist?" obscures the real issue: What should government do to promote equal opportunity? 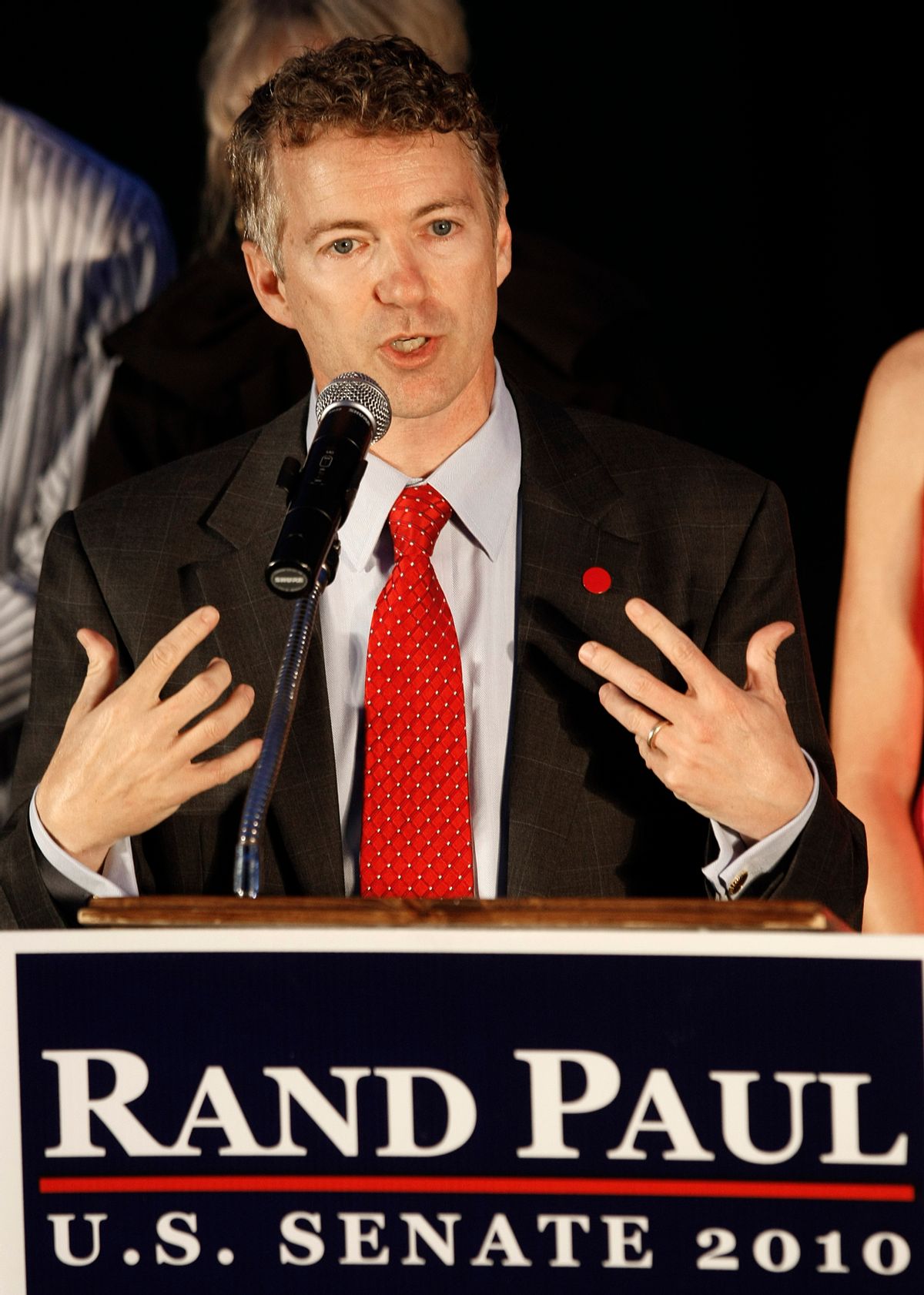 I'm coming to regret using the term "racist" about the Tea Party. "Racist" is a personal insult, and it's almost as impossible to prove it as to disprove it. It's not a terribly illuminating term, either: If you call me a racist, you haven't really described anything I've done that's objectionable. You've just somehow designated me, and my so-far unchallenged arguments, outside the pale, so to speak.

"Racist" has come to be synonymous with a belief in black inferiority, and with holding other noxious stereotypes about black people, or other minorities. Someone could conceivably not be "racist" in that sense, and still hold political views that will ultimately perpetuate the second-class citizenship of people who aren't white; in most cases, African-Americans. I think they could. I accept that it's possible.

So: I am willing to take Kentucky GOP Senate nominee Rand Paul at his personal word that he is not a racist, whatever it turns out he really believes about the 1964 Civil Rights Act. I don't know the man, I can't see into his soul. All I know is that we seem to differ, hugely, about the impact that centuries of slavery, legal segregation and discrimination have had on African-Americans, and on what to do about it.

I say "seem to differ" because Paul is now flipping and flopping and slipping and sliding like an oily politician. When I started writing this blog post, Paul was still insisting that he supported about 90 percent of the Civil Rights Act, but had reservations about its application to private businesses, just as he told MSNBC's Rachel Maddow Wednesday night. I was prepared to concede that Paul may not be a racist, but explain how his views perpetuate racial inequality.

But then Paul spent most of Thursday changing his story. First, he told his conservative buddy Laura Ingraham that his only mistake was talking to Maddow in the first place. Midday, he issued a statement that he would not try to repeal the Civil Rights Act. Late Thursday an exasperated Paul told CNN's Wolf Blitzer, "Yes, I would have voted yes" on the measure had he been in the Senate back when the act was passed.

What are we really supposed to believe about Paul's beliefs?

Let me go back to my original point for a minute. I'm prepared to stop calling Paul, and other Tea Party supporters who oppose many of the reforms of the civil rights movement, "racist." I'm prepared to believe that many of them, theoretically, wish the best for every non-white person in America. In defending Paul early today, libertarian blogger Dave Weigel wrote:

Paul believes, as many conservatives believe, that the government should ban bias in all of its institutions but cannot intervene in the policies of private businesses. Those businesses, as Paul argues, take a risk by maintaining, in this example, racist policies. Patrons can decide whether or not to give them their money, or whether or not to make a fuss about their policies. That, not government regulation and intervention, is how bias should be eliminated in the private sector. And in this belief Paul is joined by some conservatives who resent that liberals seek government intervention for every unequal outcome.

I disagree, wholeheartedly, with that point of view, which Paul seemed to espouse as of yesterday and which Weigel seems to defend. Anyone who knows anything about the history of the civil rights movement in the South knows it didn't work that way. Black patrons didn't really have the right to "decide" whether to give segregated facilities their money, and the vast majority of whites wholeheartedly voted with their dollars, and in every other way, to maintain them. Blair Kelley shattered Paul's apparent argument in Salon today, drawing from the research on her groundbreaking book, "Right to Ride: Streetcar Boycotts and African American Citizenship in the Era of Plessy v. Ferguson," showing how Paul echoes the very arguments segregationists used to defend separate (private and public) facilities back in the 19th century.

In his interview with Wolf Blitzer, Paul said, finally, that he'd have voted for the Civil Rights Act because "I think that there was an overriding problem in the South so big that it did require federal intervention in the '60s." Does Paul really believe that, or did he decide the constant questions about his stance weren't worth the political aggravation?

I'm actually sorry that Paul caved on the question of the Civil Rights Act, because if he'd stuck to his guns, we could have had a debate about the correct remedies, past, present and future, for the enduring legacy of legal discrimination against black people. Of course, it's stereotyping liberals to say, as Weigel did, that we "seek government intervention for every unequal outcome." But the more Tea Partiers are expected to explain their actual political beliefs, and what they would do if they held public office, the more, I believe, their point of view will be exposed as marginal. Paul will face many more of these questions. Now he's dodging queries about the Americans With Disabilities Act the same way he did the Civil Rights Act; he won't say how he would have voted on it, but he expresses reservations about federal intervention in the workings of small business.

On Thursday Weigel uncovered a 2002 letter in which Paul chided the Bowling Green Daily News for endorsing the Fair Housing Act. He sounded pretty unequivocally opposed to the federal government messing with private businesses, for any reason:

A free society will abide unofficial, private discrimination, even when that means allowing hate-filled groups to exclude people based on the color of their skin ... Should it be prohibited for public, taxpayer-financed institutions such as schools to reject someone based on an individual's beliefs or attributes? Most certainly. Should it be prohibited for private entities such as a church, bed and breakfast or retirement neighborhood that doesn't want noisy children? Absolutely not.

So questions about what Paul believes on these issues are going to dog him for a while, and they should. Does he support child labor laws? Food and drug regulation? Should we expect a statement tomorrow that actually, he would have voted for the ADA in 1990?

In the meantime, I feel a little bad for conservatives and libertarians who defended Paul, like Weigel, as well as my frequent antagonist, James Taranto of the Wall Street Journal. Taranto praised Paul for being "honest" about his unorthodox views (and attacked me for being a "demogogue") today. When was Rand Paul being honest, last night with Rachel Maddow, or with Wolf Blitzer today?  I'm not calling Paul racist. I'm just asking him to stand up for what he really believes, so we can have an honest debate about it.