On immigration, Obama is bound by race and politics

His image depends on a racial identity even while downplaying it. Which makes confronting immigration problematic 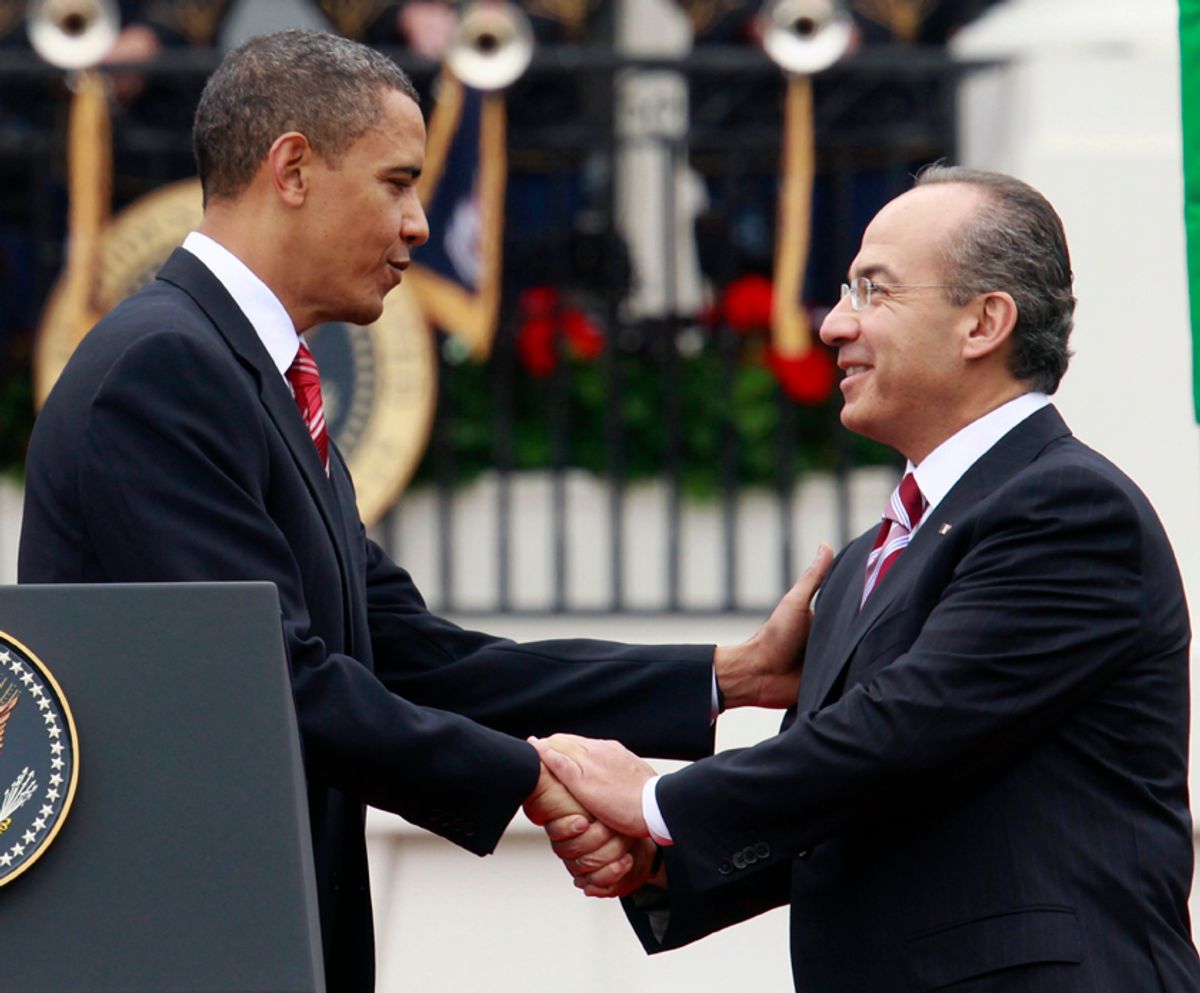 What an awkward position Barack Obama was in Thursday! Welcoming the Mexican president, Felipe Calderón, to the White House, he could offer only boilerplate rhetoric about immigration: “In the 21st century, we are defined not by our borders, but by our bonds. So I say to you and to the Mexican people, let us stand together.”

With his crammed domestic agenda and teetering approval ratings, President Obama is moseying away from immigration reform before the midterm elections. Even as he denounces Arizona's drastic new measure, law-professor-style, the president is sending mixed signals. In an episode still rankling Latino advocates, the president recently declared that Congress might not have the "appetite" to push for reform — just as Democratic senators were poised to roll out … a reform agenda.

Further clouding Obama's message is the fact that more immigrants were deported during his first year in office — more than 388,000 — than any other year in the republic’s history. To progressives, the president’s apparent "security first" approach makes it seem as though he's trying to appease conservatives at the expense of Latinos.

The big elephant in the room, one that Democrats and the media willfully ignore, is race. Not the race of immigrants — the race of the president.

As the son of an immigrant and as a black man, Obama walks a sticky briar patch in handling reform. His management of his brand identity, especially his blackness, creates an aura of historic inclusion and racial reconciliation, even while it discourages too much diversity talk or racial grist. According to this stratagem, the president is a racial prophet with no racial agenda. Race does not play a role in Obama’s national problem solving, but it is central to his novelty and political brand. His image deftly depends on a racial identity even as it downplays it.

This political and racial double bind handicaps Obama’s aptitude for immigration reform. Any race-related issue, especially immigration reform, that isn’t properly and universally feel-good, is radioactive for this president.

Political challenges lurk for all involved. Obama and a slim-majority Democratic Congress need to balance the substance of immigration reform with the competing demands of labor groups, Latinos, clergy, civil liberty advocates and others.

Little wonder that Democrats who represent majority-white and/or blue-collar districts, which have been hit especially hard by the recession, are bucking reform.

"We need to be focusing on the economy, period," said Space. "I am firmly opposed to these plans, and I will fight Speaker Pelosi’s attempts to move this disastrous policy."

As if predicting the 2010 storm over immigration reform, Obama’s own chief of staff, Rahm Emanuel, declared back in 2006: "For the American people, and therefore, all of us, immigration emerged as the third rail of American politics. And anyone who doesn’t realize that isn’t with the American people." True to racial codes, Emanuel’s "American people" apparently excludes the majority of Latinos.

While orchestrating the Democratic takeover of the House in '06, Emanuel advised the party’s candidates to inoculate themselves against the vexatious issue by tacking to the right. With a few exceptions — illustrated by Sen. Charles Schumer and Reid’s reform agendas — Emanuel’s advice still reigns as the Democratic conventional wisdom.

Frank Sharry, a longtime pro-immigrant activist and the founder of America’s Voice, a nonprofit devoted to building support for immigration reform, mocked the Democrats’ squeamishness.

“We always get the ‘smart’ pundits who say Democrats would be foolhardy to bring up immigration: 'You'll drive independents away and mobilize the right wing,'” Sharry told the Daily Beast. “First of all, the right is already totally mobilized. Second, independents want solutions and not politics as usual. And third — guess what? — Latinos were a base vote in 2006 and 2008, and they're about to stay home because you haven't done shit for them.”

In the meantime, Republicans also need to balance substance with the political demands of tugging factions: their pro-business, pro-immigration corporate wing versus the vocal immigration-restriction movement.

And then, of course, there are Latinos. The 2010 census will likely shift power and add congressional seats to Republican-leaning states and to states with significant or fast-growing Latino populations, like Texas and Arizona.

Given Latinos’ increasing clout at the polls, each party faces short- and long-term political gains and hazards no matter what it does.

A patch of tar babies — pragmatism, centrism, geography and race — color the willingness of Obama and his fellow Democrats to undertake immigration reform. As the president juggles his record-high levels of immigrant deportation, his ambivalence over the issue, and his delicate racial karma, Democrats should not allow this political and racial calculus to foil reform.

Rich Benjamin is the author of "Searching for Whitopia: An Improbable Journey to the Heart of White America," winner of a 2009 Editor’s Choice award from Booklist and the American Library Association.