"Wide Awake": How we all became insomniacs

Our sleep problems are worsening -- especially among baby boomers. One woman examines why 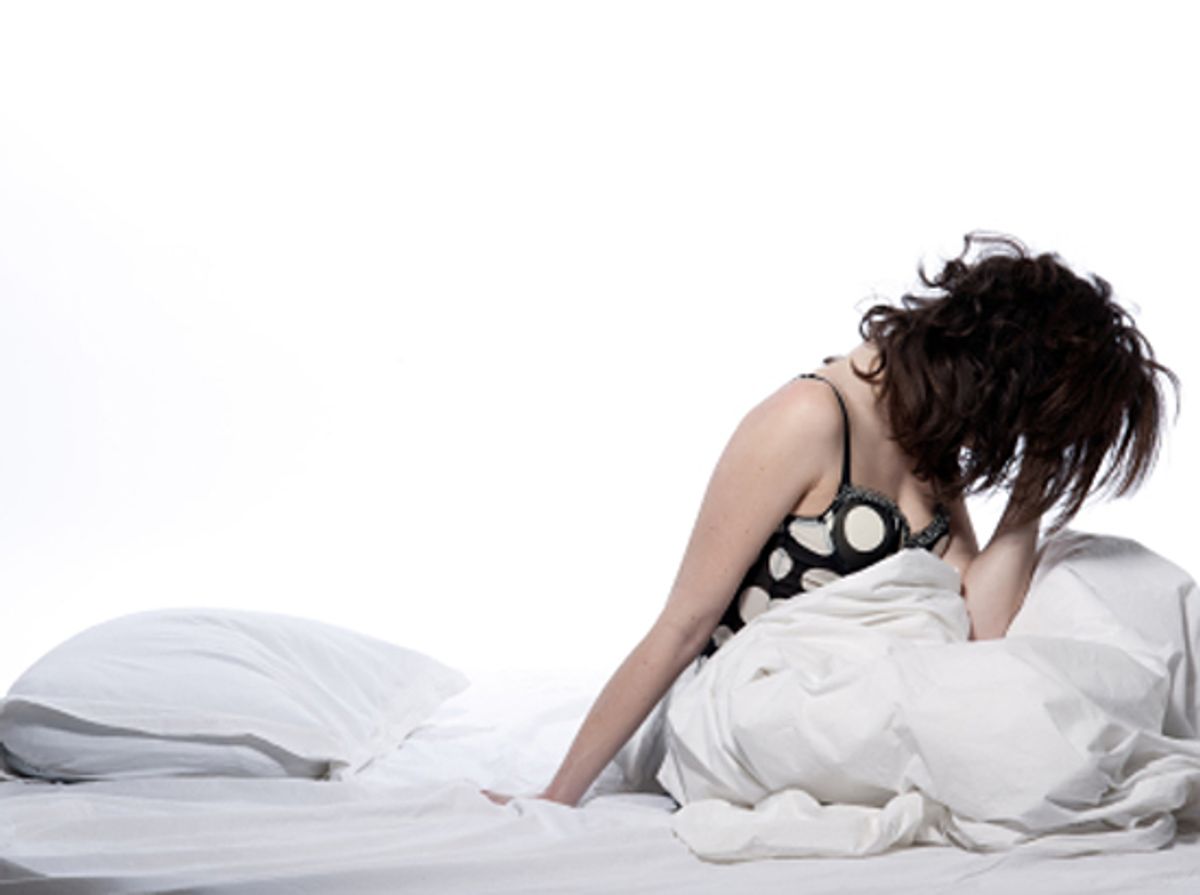 It seems that now, more than ever, Americans suffer from an array of sleep disorders, some of which almost seem like fanciful products of the pharmaceutical industry: restless leg syndrome, jet lag syndrome, shift-work sleep disorder. According to a 2009 poll done by the National Sleep Foundation, 64 percent of Americans report sleep problems at least a few nights a week, making them crankier, more likely to crave sugary snacks, less likely to exercise, and less likely to have sex. And our national sleeping woes are getting worse: The same study found a 13 percent increase in sleep problems since 2001. And in 2009, physicians prescribed over 56 million prescriptions for sleeping pills, a 7 percent increase from 2007.

It’s a problem that Patricia Morrisroe, a former film critic and the author of "Mapplethorpe: A Biography," knows very well. She has spent her lifetime struggling with insomnia, bombing exams in her younger years due to lack of sleep and routinely waking up anxiety-stricken as an adult. Fed up and exhausted, she decided to seek professional help. In her new book, "Wide Awake: A Memoir of Insomnia," Morrisroe delves into the science of our increasingly troubled relationship with sleep, and looks into its possible solutions. Her search for a cure takes her to psychopharmacologists, therapists, hypnotists and psychics and one very comfortable and very unaffordable mattress (price: $21,057). She sleeps in ice hotels, sleep clinics and napping pods, but, in the end, discovers that sleeping is mostly about your state of mind.

Salon spoke with Morrisroe over the phone about our national sleep problem, the stress of going to a sleep clinic, and why we’re trying to keep 4-year-olds awake with energy drinks.

Polls suggest that more and more people are having sleep problems. Why do you think that is?

That’s a complicated question. I think you can link it directly to the aging of the baby boomers. The baby boomers are this big bulge in the population and they’re getting older, and as you age you get wrinkles.

The second thing is all the sleeping pill advertisements. The pharmaceutical companies, with the introduction of Ambien in the early '90s have made a big push for sleep. They are holding up this ideal that we all should be sleeping seven to eight hours, and if not, there’s something wrong with us and these are all the horrible things that will happen to us.

How did you sleep last night?

Not great, to be honest. I’ve done pretty well throughout this whole process and I do feel like I’ve got a real handle on insomnia. But if you’ve got people constantly asking how you slept, it just puts a whole new level of pressure on you that normal people I don’t think have, nor do I have normally.

I'm sorry to join the chorus. What’s the worst thing about being an insomniac?

The lack of control. Because I am a very controlling person. And I am a bit of a perfectionist in everything that I do. Sleep, which is one of the most natural processes, kept on eluding me. I found it incredibly frustrating.

What prompted you to get treatment for your insomnia?

As an adult my sleep tended to split in two (which does happen to a lot of people). I’d fall asleep right away and then around 3 o’clock I’d be wide awake facing this yawning hole in the night. Eventually I’d be able to fall back asleep but not without tremendous anxiety. Then I decided to just go with this. I would wake up as I did, analyze my dreams, think of book ideas. It was sort of fun and very productive for me. And then I’d fall back asleep until about 8:30 and all totaled I’d get eight hours of sleep. And that was really working for me.

And then the noisy neighbors moved upstairs, the little elephants. So when the kids got up and came crashing through the ceiling first thing in the morning, I couldn’t fall back asleep, in which case I was getting up at 3 and not being able to fall back asleep. And this was around 2006 and this was absolutely my worst period. Because once you start to worry about sleep, things just escalate downward. So then one day I was walking across Park Avenue to get a latte that I desperately needed and I walked on a green light and I nearly got hit by a cab. And the cab driver said something like, "What’s your problem?" and I began to really recognize that it was something that I needed to deal with.

So you decided to go to a sleep clinic ...

When I decided I needed to get a handle on it, my internist suggested that I see a sleep doctor who had me have a sleep study. Even as a kid I didn’t like sleeping over at other people’s houses so the idea of going off in the middle of the night way uptown was just the pits. So I did that; I got completely wired up. The technician came in and said, "If some of the wires come unattached during the night I’ll quietly come into the room and reattach them and hopefully you won’t wake up." My response was,"If I was the type of person who didn’t wake up when a strange man came into my room to reattach electrodes to my head I would not be in a sleep clinic." So I slept poorly there.

What other methods did you try to get over your insomnia?

My sleep doctor wanted to put me on medication: low-dose doxepin, which has been approved by the FDA. I didn’t like it; it gave me hallucinations. We went on to Lunesta; I didn’t like that. He wanted me to see a cognitive behavioral therapist. I had been someone who had been in therapy. And I know that CBT is very different from regular psychotherapy, but we never sort of got around to changing my dysfunctional ideas about sleep.

When I told my sleep doctor that I was writing a book he was very unhappy with me and said that he couldn’t help me get well now. Knowing your sleep doctor was mad at you when you’re trying to get sleep ... really, I had to leave.

Hypnotherapy seemed to work briefly, and then you got derailed. What happened exactly?

Hypnotherapy was very successful for approximately 10 nights. It is amazing how you believe in something  -- and that goes along with the placebo effect -- that it can work. And it did.

I think when it stopped working was when my mother called and we had an upsetting conversation, and then I broke my toe. It just wore off. I lost faith in my hypnotherapist. With hypnotherapy you just sort of need to believe in it. It just had a short life span for me.

I think it’s interesting how people are trying to push this idea of a "normal" sleep pattern. A lot of people have trouble sleeping at one point or another. At what point does it become a disorder?

Our definition of sleep naturally is how Westerners sleep. Carol Worthman, one of the few anthropologists to have ever studied sleep, analyzed half a dozen traditional non-Western cultures and she found that sleep was much more fluid, that it wasn’t this huge chunk of time. She talks about how maybe that is because we always needed one member to keep guard. So that’s why sleep needs are staggered throughout people's lives from an evolutionary point of view.

Look at how teenagers sleep. Because of their hormones, teenagers tend to sleep much later and get up much later. That’s why so many of them are so incredibly sleepy during their early classes. It's not their fault; that’s just the way their biological clock runs. There was some push to change school start times, but that proved very difficult. Also, the economy is really working against any sensitivity that we might have to sleep differences, needs and sleeping healthier. You can’t just tell everyone that you’ve got to get eight hours or else. They’re going to go, "Oh my god, we’re going to have to take sleeping pills."

There seems to be a shift in the U.S. from sleep-inducing drugs to ones that promote wakefulness? Is that where we’re headed in terms of designer drugs?

In an interview I saw, one sleep doctor said something about the moral argument on getting by on less sleep was a very 20th century concept. The 21st century is all about wake. We are moving in that direction with the introduction of Provigil, particularly with the amount of travel people are doing, going back and forth to China consistently. A couple of weeks ago my husband was in five different countries in the Middle East, had to come back, and then go to L.A. People are having incredibly grueling schedules and that’s where drugs like Provigil may help in years to come, or a lot sooner.

A lot of these college students are already taking Provigil as a smart drug. They’re using Adderall and Ritalin even though they don’t have diagnoses with ADHD. To a smaller extent they’re using all the energy drinks. I hate to see that happen and I know Cephalon has been trying (they’ve been turned down) to get Nuvigil approved for jet lag disorder. To me, it’s creepy. But maybe the drug will have its place.

How do you feel like this lifestyle of perpetual wakefulness will affect our sleep?

There is a tremendous desire, and perhaps even a need, for a lot of stimulating drugs. Where are we heading? Going back and looking at some of the research, at every point in time, whether it was changes wrought by industrialization or the radio or the introduction of television, there were articles upon articles about what this was doing: nervous tension, stress, insomnia, it was all because of those new technologies. And we’ve adjusted to those. And I suspect we’ll adjust to this. I mean people are living longer. But I think we are absolutely entering a whole new world out here of both sleep and wake.

Now that you’ve written this book, what would you recommend for someone with insomnia?

I think the meditation has been very helpful in terms of giving me a sense of control and lessening anxiety. And for many people who have difficulty sleeping, they tend to be more hyper-aroused. Meditation gave me a sense of control and made me realize that one bad night didn’t need to spiral into another. That’s what had happened to me. Last night I had a bad night’s sleep. But I’m confident enough in my sleeping abilities that I’ll have a better night of sleep. But you can check up on me if you want.