"Quantum": When physics got spooky

A new history of the birth of quantum physics brings the weird, protean, paradoxical subatomic world to life 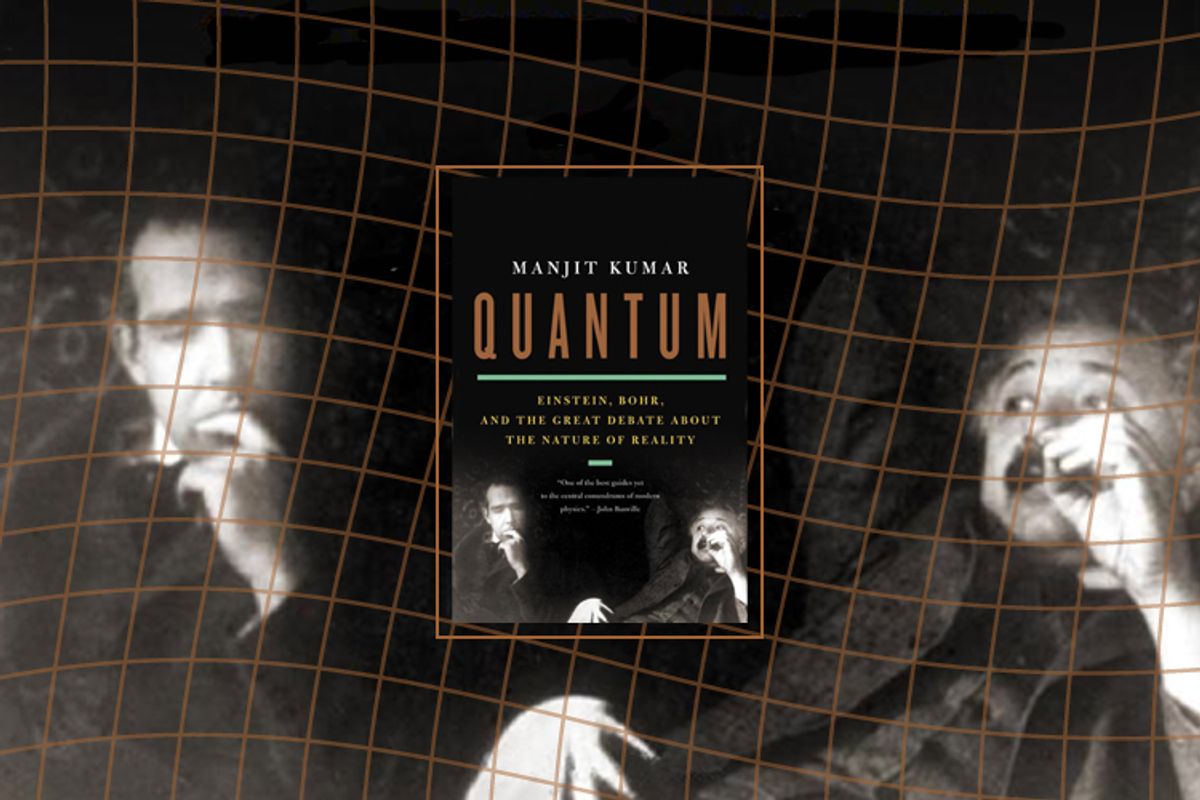 "I think I can safely say that nobody understands quantum mechanics," wrote Richard Feynman, and given that he won a Nobel Prize in physics, why should you or I want to take a shot at it? Not that you or I could plausibly claim to understand the weird, protean, paradoxical subatomic world that quantum science describes, but anyone reading Manjit Kumar's "Quantum: Einstein, Bohr and the Great Debate About the Nature of Reality" will surely feel they've gotten a bit closer. It's an exhilarating, if also disorienting, sensation.

"Quantum" orbits around the celebrated fifth Solvay conference, held in Brussels in 1927, a gathering of the greatest minds in 20th-century physics. It was at Solvay that Werner Heisenberg and Max Born presented the theory of quantum mechanics they had been working on for several years under the informal leadership of Niels Bohr. Their understanding of subatomic reality came to be called "the Copenhagen interpretation" (after the location of the Institute of Theoretical Physics, which Bohr ran), and its champions proclaimed it a "closed theory, whose fundamental physical and mathematical assumptions are no longer susceptible of any modification."

Albert Einstein, also present, disagreed, and the following decades saw a series of intense, if friendly, arguments between Einstein and Bohr -- who, as Kumar notes, had a diagram of one of Einstein's most famous thought experiments up on his office chalkboard on the day he died in 1962. That experiment, which involved the imaginary weighing of a "box filled with light" before and after a single photon is allowed to escape, is an example of the surreal mental territory that "Quantum" explores. Reading it is a bit like lifting the hood of your mind and moving the working parts around; it's challenging and trippy -- as only the Dr. Seuss realm of the quantum can be.

Kumar, a science writer in Britain (where this book was first published, two years ago), makes a point of playing up the collaborative aspects of the evolution of quantum theory, as well as the conflicts; the two can't really be separated. He begins with Max Planck's reluctant invention of the "quanta" -- an indivisible unit of energy -- in 1900. He insisted it was a mere theoretical, most likely temporary "trick," designed to get certain formulas to work properly. When, five years later, Einstein, during a period of astounding scientific creativity that included his famous paper on special relativity, suggested that light might be made up of "particle-like quanta" (later called photons), he thought of it as his most daring break with the classical physics of Newton. Light, like other forms of energy, had long been believed to flow in continuous waves, not in tiny chunks.

It was in the 1920s that quantum mechanics as we know it was born, with physicists like Heisenberg, Wolfgang Pauli, Erwin Schrödinger and Paul Dirac scrutinizing each other's proposals, seizing upon weak spots to investigate, discovering little-known laboratory data or mathematical methods that might provide a solution and writing important papers only to find that some theoretician in the hinterlands had gotten there first. It was, as Kumar puts it, "a golden age ... unparalleled since the scientific revolution in the 17th century led by Galileo and Newton." The dollops he offers of these scientists' personal lives and youths emphasize the importance of teachers, mentors and patrons, as well as those rare individuals, like Bohr, whose tact and generosity aided in keeping things collegial. (By contrast, 17th century science was impeded by the paranoia and secrecy of Newton.)

That it can be hard to wrap your brain around the principles of the subatomic world is a given. It's a strange kingdom, full of things that don't exist or exist in two opposite conditions at once until somebody looks at them, particles that influence each other instantaneously despite being separated by lightyears and electrons that move from one place to another without traveling through the space in between. Books on the subject rely on good metaphors, clearly explained, and Kumar delivers them, but "Quantum" is not for the complete novice or those timid souls who quail at the sight of an equation. (I can't claim to understand the few equations Kumar includes myself, but they don't scare me away, and I found this book is perfectly intelligible even though I can't do the math.)

Much of the debate between Einstein and Bohr revolved around Einstein's intuitive rejection of the implication of the Copenhagen interpretation -- which is that objective reality, independent of any observer, doesn't really exist. Bohr, by contrast (and sounding a lot like Wittgenstein), insisted that physics isn't concerned with what is but solely with what we can say about it. Not only were these two geniuses battling over where to draw the line between the familiar, cause-and-effect world of classical Newtonian physics and the quantum Wonderland, they were sketching, erasing and resketching the boundary between science and philosophy, debating the nature of reality itself.

Einstein was for many years regarded as a stubborn, even senile holdout against the quantum gospel, but Kumar finds that view simplistic. "Quantum" concludes by surveying developments since the deaths of Bohr and Einstein, such as Bell's Theorem and the many worlds interpretation, some of which point to critical problems that the Copenhagen interpretation left unresolved. (One is how the phenomenon of the universe came to be in the first place if there was no one to observe the Big Bang.) All of this, the author maintains, has led to "a reconsideration of the long-standing verdict against Einstein in his long-running debate with Bohr." Instead, he paints Einstein as a partisan of that most precious of scientific tools: the question. That's why he ends with one of the physicist's favorite quotations, from the German philosopher Gotthold Lessing: "The aspiration to truth is more precious than its assured possession."

Books History Our Picks Physics Science Books What To Read