Instead of blasting BP, the secretary of the Interior should be making sure his own regulators do their job 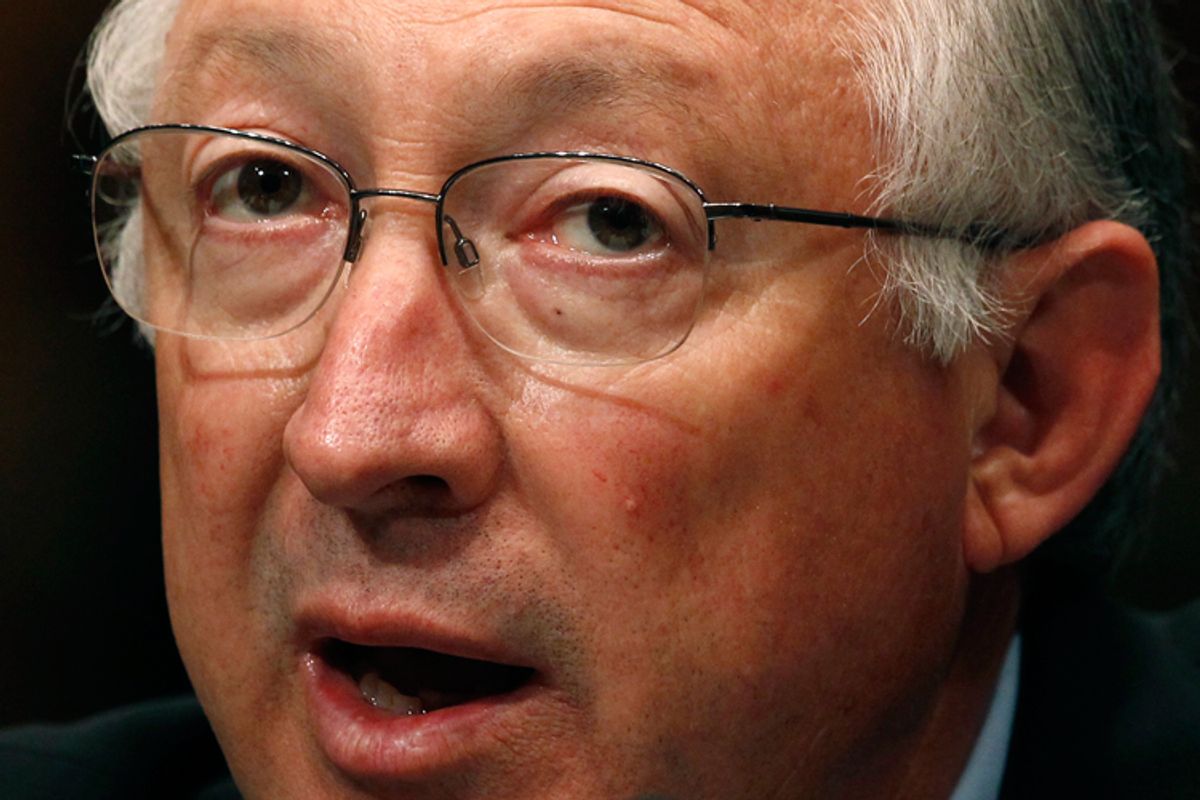 Interior Secretary Ken Salazar testifies at the Senate Environment and Public Works Committee hearing on May 18.
--

Secretary of the Interior Ken Salazar is mad at BP for "missing deadlines."

U.S. Interior Secretary Ken Salazar blasted the British oil giant for consistently missing deadlines it had set for shutting off the massive well leak still spewing millions of gallons of oil into the Gulf of Mexico each day.

"I am angry and frustrated that BP has been unable to stop the leak, " Salazar said at a news conference following hours of morning meetings with the company. "We're 33 days in, and deadline after deadline has been missed."

I don't want to be misinterpreted as overly sympathetic to BP, but Salazar is displaying a fundamental misunderstanding of the nature of the Gulf oil spill catastrophe. Stopping the leak is not a matter of willpower. It's not as if there is a fix ready at hand that BP is failing to apply. BP simply doesn't know how to solve the problem. Deadlines are being missed because attempted solutions are failing, not because BP is a slacker.

If Salazar is looking for a target for his anger, he'd be much better off directing it at his own government department. The more we learn about the Minerals Management Service, the worse it looks. The New York Times reports today that despite Obama's declared moratorium on new drilling and environmental waivers, MMS has continued to grant environmental waivers for new drilling related to already existing wells, some of which are in much deeper water than Deepwater Horizon.

The Times' Ian Urbina details a Kafkaesque system in which statutory requirements obligate MMS "to process drilling requests within 30 days after they have been submitted," but only allow a 60-day period to contest environmental waivers. So under U.S. law, if an oil company asks for an environmental waiver to start drilling, MMS has to respond promptly, and then the clock immediately starts ticking to limit the window of opportunity for anyone to argue why the waiver shouldn't be granted. That sounds suspiciously like a system of laws designed to expedite drilling, not to protect the environment (or the Gulf seafood business).

But of course, that's been the story all along with MMS and offshore oil drilling. A self-regulating industry was allowed to keep pushing deeper and deeper into uncharted, experimental territory, without adequate plans or preparation being made for potential disasters by either industry or government.

Salazar is starting to feel the heat, and well should he. Obama's appointments to run the Department of Energy, Steven Chu, and EPA, Lisa Jackson, came in and immediately shook things up, reorienting direction and changing policy. But there seems to be little evidence that Salazar did anything of the sort at Interior. Quite the contrary, even after the spill, per the New York Times report, business has continued almost as usual.

And now we have a mess that we can't clean up. Nola's Hammer provides essential context:

With each criticism of BP and the federal government's inability to force the company to move faster when oil is spotted coming ashore, local officials have started to clamor for President Barack Obama to federalize the disaster response under the Oil Pollution Act.

But Coast Guard Commandant Adm. Thad Allen, the national incident commander, reiterated on the Sunday morning talk a message he's been sharing almost since the disaster struck April 20: Industry, and not the federal government, has all the resources to deal with the leak 5,000 feet below the sea and as it comes toward land.

The fear is that if Obama federalizes the response and supplants BP, not only will it be more difficult to get the company to pay for the response efforts, but the federal government may not have the capacity to get the job done.

Think about that for a second. The government of the most powerful nation the world has ever known does not have the capacity to stop an oil leak. And our leaders are getting mad at BP for missing deadlines?