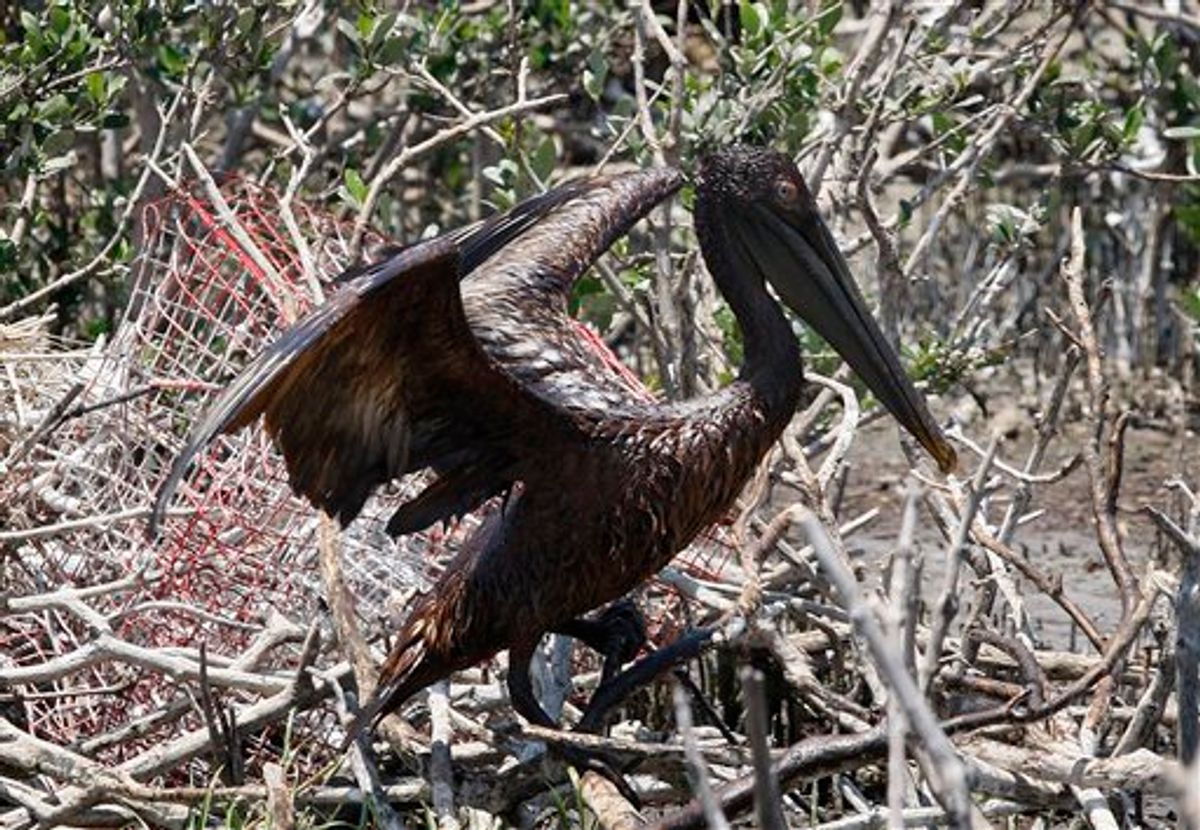 An oil-covered pelican flaps its wings on an island in Barataria Bay off the coast of Louisiana, Sunday, May 23, 2010. The island is home to hundreds of brown pelican nests as well at terns, gulls and roseate spoonbills and is being impacted by oil from the Deepwater Horizon Oil Spill. (AP Photo/Patrick Semansky) (AP)
--

The Gulf of Mexico oil spill seeped miles deeper into Louisiana's fragile marshes, making it tougher to clean up or to rescue wildlife like the brown pelican, as the biggest uncertainty of all remained: When will BP be able stop the leak?

With frustration mounting at the global oil giant and at the government, the Obama administration pressured BP PLC to fix the gusher finally after several failed ventures in the weeks since an April 20 oil rig explosion.

Secretary of the Interior Ken Salazar said Sunday he was "not completely" confident that BP knows what it's doing.

"If we find they're not doing what they're supposed to be doing, we'll push them out of the way appropriately," Salazar said.

The White House said the Justice Department has been gathering information about the oil spill in the Gulf of Mexico.

Press secretary Robert Gibbs didn't say whether the department has opened a criminal investigation. He would only tell CBS' "Face the Nation" on Sunday that department representatives have been to the Gulf as part of the response to the BP oil leak.

Salazar and Secretary of Homeland Security Janet Napolitano were to lead a Senate delegation to the region Monday to fly over affected areas.

BP is getting barges and other equipment ready to prepare for a risky procedure midweek that the company hopes will finally halt the gusher.

But the "top kill" maneuver, which shoots heavy mud and then cement into the blown well, has never been tried at 5,000 feet underwater and BP officials caution they are working on a range of backup plans.

Even if it works, the damage has been done.

On Sunday, some brown pelicans coated in oil couldn't fly away on Barataria Bay of the Louisiana coast. All they could do was hobble. Their usually brown and white feathers were jet black, and eggs were glazed with rust-colored gunk.

When wildlife officials tried to rescue one of the pelicans, the birds became spooked. Officials weren't sure whether they would try again, and U.S. Fish and Wildlife spokeswoman Stacy Shelton said it is sometimes better to leave the animals alone than to disturb their colony.

Pelicans are especially vulnerable to oil because they dive through the water's surface to feed. They could eat tainted fish and feed it to their young, and they could die of hypothermia or drown if their feathers become soaked in oil. Just six months ago, the birds had been removed from the federal endangered species list.

With oil pushing at least 12 miles into Louisiana's marshes and two major pelican rookeries now coated in crude, Louisiana Gov. Bobby Jindal said the state has begun work on a chain of berms, reinforced with containment booms, that would skirt the state's coastline.

"As we talk, a total of more than 65 miles of our shoreline now has been oiled," Jindal said.

Jindal, who visited one of the affected pelican nesting grounds Sunday, said the berms would close the door on oil still pouring from a mile-deep gusher about 50 miles out in the Gulf. The berms would be made with sandbags; the U.S. Army Corps of Engineers also is considering a broader plan that would use dredging to build sand berms across more of the barrier islands.

At least 6 million gallons of crude have spewed into the Gulf, though some scientists have said they believe the spill already surpasses the 11 million-gallon 1989 Exxon Valdez oil spill off Alaska as the worst in U.S. history.

A mile-long tube operating for about a week has siphoned off more than half a million gallons in the past week, but it began sucking up oil at a slower rate over the weekend. Even at its best, the effort did not capture all the oil leaking.

The spill's impact now stretches across 150 miles, from Dauphin Island, Ala. to Grand Isle, La.

At Barataria Bay, globs of oil soaked through containment booms set up in the area. Plaquemines Parish President Billy Nungesser said BP needed to send more booms. He said it would be up to federal wildlife authorities to decide whether to try to clean the oil that has already washed ashore.

"The question is, will it do more damage because this island is covered with the mess?" Nungesser said.

Officials have considered some drastic solutions for cleaning the oil -- like burning or flooding the marshes -- but they may have to sit back and let nature take care of it.

Plants and pelican eggs could wind up trampled by well-meaning humans. If the marshes are too dry, setting them ablaze could burn plants to the roots and obliterate the wetlands.

Flooding might help by floating out the oil, but it also could wash away the natural barriers to flooding from hurricanes and other disasters -- much like hurricanes Katrina and Rita washed away marshlands in 2005. State and federal officials spent millions rebuilding the much-needed buffer against tropical storms.

On Sunday, oil reached an 1,150-acre oyster ground leased by Belle Chasse, La., fisherman Dave Cvitanovich. He said cleanup crews were stringing lines of absorbent boom along the surrounding marshes, but that still left large clumps of rust-colored oil floating over his oyster beds. Mature oysters might eventually filter out the crude and become fit for sale, but this year's crop of spate, or young oysters, will perish.

"Those will die in the oil," Cvitanovich said. "It's inevitable."