To stop Rubio, White House must team up with Crist

Democrats have a chance to beat the GOP in Florida. But their own candidate is getting in the way 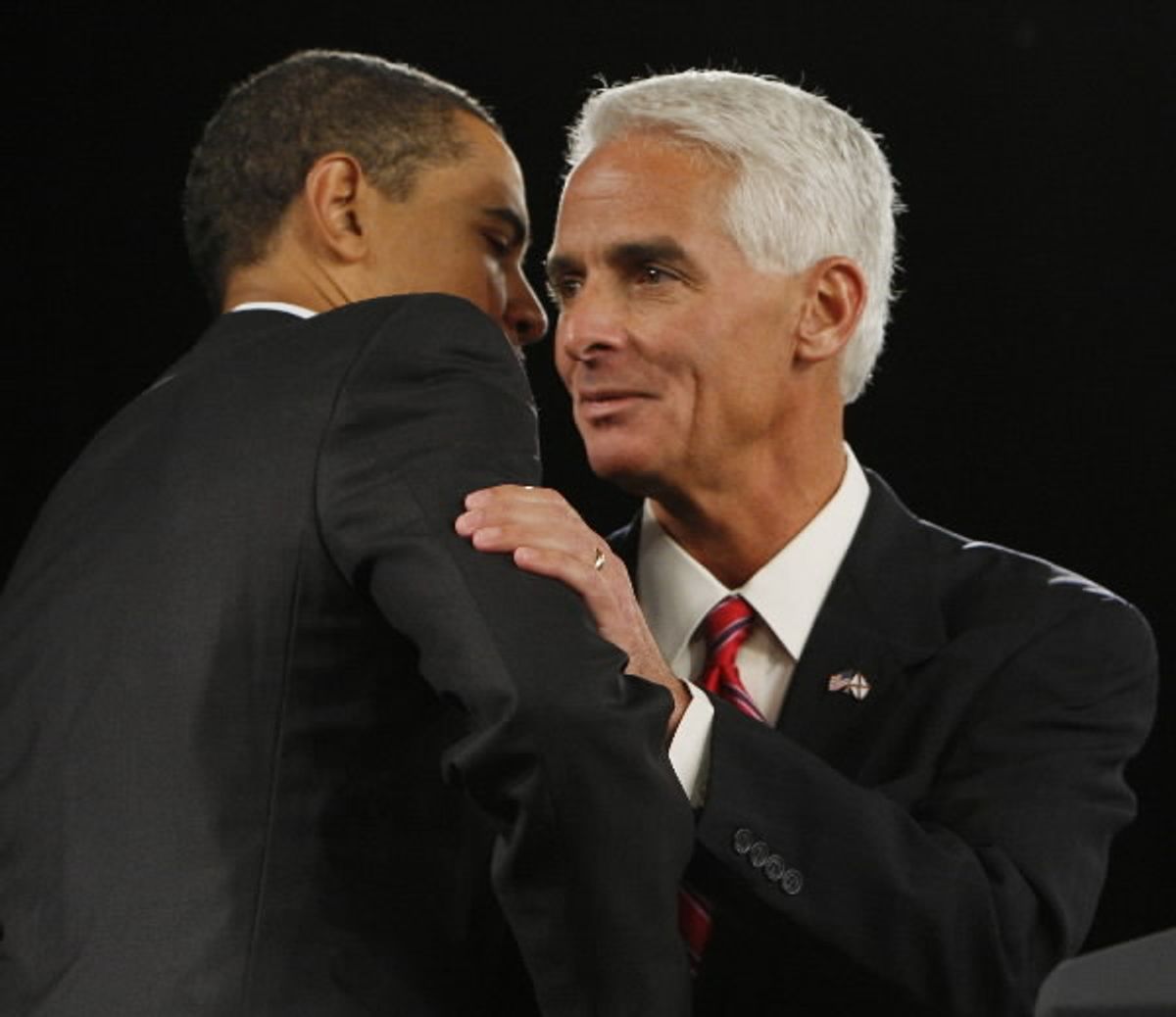 In the fall of 2002, with his reelection campaign imploding, New Jersey Sen. Robert Torricelli was replaced on the ballot by his nemesis, Sen. Frank Lautenberg, who easily won. The famous Garden State Switch was engineered by antsy state and national Democrats, who feared that the Torch’s ethical problems would cost their party a crucial seat.

This year, Democrats could be positioned to engineer a different switch, this time in Florida, where the presumptive Democratic nominee, Rep. Kendrick Meek, has fallen far behind in a three-way race with Republican Marco Rubio and independent Charlie Crist. Democrats could use the same direct, high-level pressure that forced Torricelli's hand to usher out Meek in favor of Crist’s independent bid -- a move that would give Democrats their best chance of knocking off Rubio.

To be sure, the circumstances in Florida this year aren't quite what they were in New Jersey in '02. Unlike Torricelli, Meek is not weighted down by immense baggage. And the four-term congressman has deep ties to the national party (he's one of House Speaker Nancy Pelosi's favorites), not to mention a solidly liberal record pleasing to the Democratic base.

But, simply put, Meek has little chance of prevailing. The latest poll has Crist barely ahead of Rubio, 30 percent to 27 percent, with Meek far behind at just 15 percent.

And with Rubio and Crist both so well-known, it's hard to envision Meek finding daylight. In other words, the choice for Democrats is really between Crist, who was essentially excommunicated from the GOP and who has moved to the left as an independent, and Rubio, a Tea Party hero. If they want to stop Rubio, they need to get behind Crist.

This would be a drastic step, sure, but polls already show Crist claiming significant support from Meek's natural base. Barring a collapse, he will win too many votes from conservative Democrats and unaffiliated voters for Meek to reach critical mass. Yes, Crist’s current high support among Democrats will drop as Meek becomes better-known statewide, but in a three-way field, Meek has no foreseeable path to victory.

A rough parallel can be found in the 2006 Connecticut Senate race, which Joe Lieberman won because the Republican Party ignored its nominee, Alan Schlesinger, and actively supported Lieberman, who earned 70 percent of the GOP vote. Like Lieberman and Schlesinger, Crist and Meek are now fighting over the same voters, since Crist is now loathed by most Republicans. The situation is slightly more complicated, though, because Meek is a far more credible candidate than Schlesinger, an obscure former state representative who was easy for the GOP establishment to snub. It will not be nearly so easy for Democrats to shun Meek. Still, Crist is a better general election candidate because he can garner more support from independents and even some Republicans than a Southern Florida liberal like Meek can.

Of course, there are some important issues that Democrats would need to address before lining up with Crist. First, Crist would have to promise Democrats that he'd caucus with them in the Senate. But given the recent cold words directed at Crist by Senate Minority Leader Mitch McConnell and National Republican Senatorial Committee Chairman John Cornyn, it's not that hard to imagine him doing so. (The fact that Democrats are likely to control the Senate next year doesn't hurt, either.)

More difficult would be forcing Meek out, a task that would require heavy lifting from the White House. Pushing aside Meek for a party-switcher who isn't even a Democrat wouldn't sit well with many in the party, especially the Congressional Black Caucus, a group to which Meek belongs. But given his electability, the White House would be foolish not to take advantage of Crist’s Republican estrangement.

Democrats don't have to move on Meek right now. They can bide their time until the fall, giving Meek a chance to build his name recognition and electoral standing. But if by September Meek is still mired hopelessly in third place, the president’s team should urge Meek to withdraw, thus allowing Crist to run head-to-head against his bête noir Rubio -- a contest in which Crist would probably be favored.

That said, by teaming up with the Democrats in the fall, Crist would risk a backlash. Florida voters, regardless of affiliation, could see it as a cynically opportunistic play -- a win-at-all-costs politician jumping from Republican to independent to Democrat in less than a year. As Arlen Specter just illustrated, there is real risk in this perception. Still, it's probably worth the risk: Crist would still be on the ballot as an independent, and besides, it's hard to envision Meek winning anyhow.

If Obama and the White House were to orchestrate this maneuver, it would infuriate grass-roots Democrats and further antagonize the CBC. But still, the potential rewards would be quite attractive. Not only would a Crist victory flip a red seat and negate GOP pickups elsewhere, it would also be a blow to the Tea Party movement and serve as proof of the electoral destructiveness of the GOP’s sharp rightward movement. If executed right, it would be a masterstroke.

Whether Democrats win Florida's Senate race may ultimately depend on Obama's willingness to get his hands dirty. Given his penchant for risk-averse behavior, it seems unlikely he'd ever move so strongly against Meek. Plus, his White House hasn't always shown the most pragmatic instincts when it comes to elections -- snubbing John Carney in Delaware (in favor of a Beau Biden campaign that never materialized), and (so far) refusing to push the embattled Alexi Giannoulias out of the Illinois Senate race.

But the White House really should think about an alliance with Crist. The dividends could be significant.