As the once-glorious show ends on its own solid terms, a loyal fan assesses the bad times, and the good 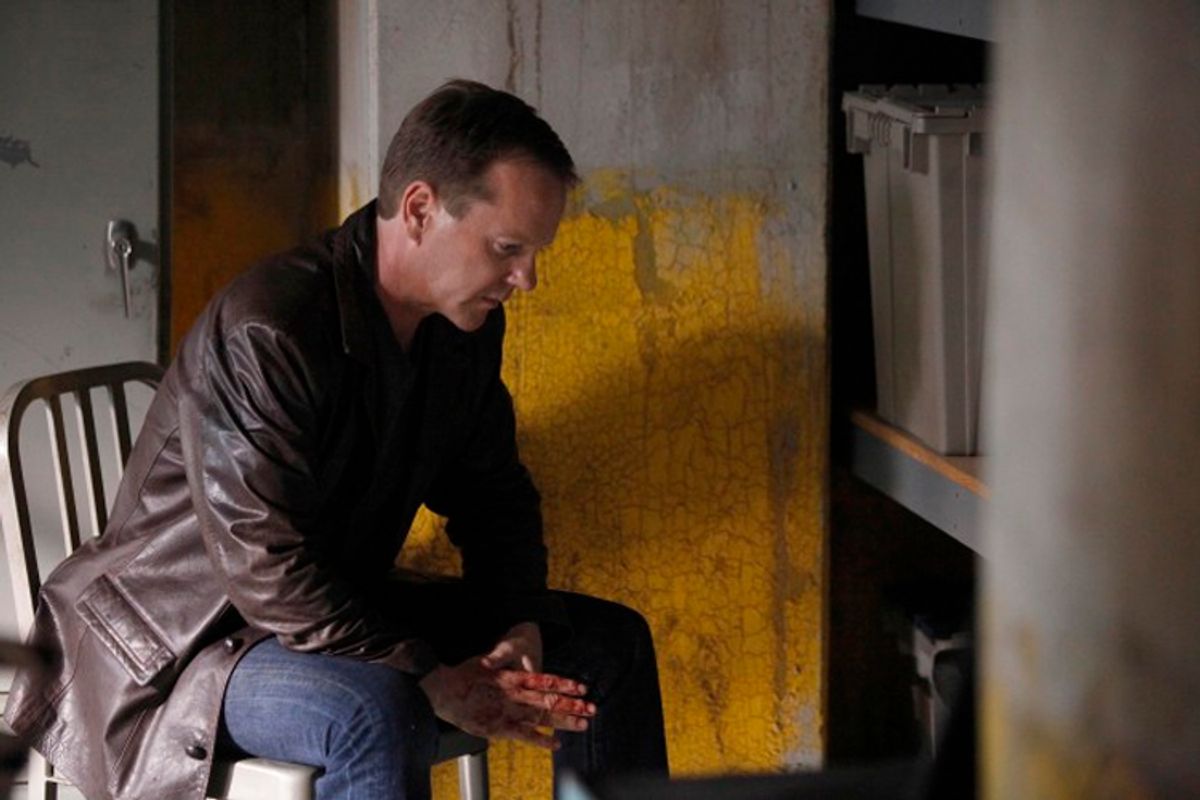 So it's over. After nine years, our time together has come to an end. Lord knows, we've had our ups and downs, and there have been times, like with Kim and the cougar, when perhaps we should have called it quits. But I'm glad we stuck it out, even though I'm not sorry to say goodbye.

It could have been worse. Somewhere in season six, the one where you set off your second nuclear explosion, we drifted apart, and I thought I was done. The first time you did it, back in season two, it was a genuine shock, even if the bomb did detonate in the middle of the desert. But the second time, it just seemed sad. I know it's hard to keep things fresh over the long haul, and there are days when the best any of can do is go through the motions. But by that point, it seemed like you weren't even trying.

I still remember the moment I first loved you. It was at the end of your first season, when Nina, who'd been revealed as a terrorist mole the week before, made the mistake of plotting her escape with Jack's pregnant wife in earshot. The man on the other end of the phone warned Nina to eliminate anyone who might know where she was headed, and she cast a steely glance at Teri before you went to commercial. I remember wondering how you were going to dig yourself out of that hole, since you obviously couldn't kill the main character's wife. And then, of course, you killed her. I was blown away by the sheer audacity of it; I'm pretty sure I let out an audible whoop. That required some explaining to my girlfriend, who I'd only been dating a month or so, but whatever I said must have sounded all right. We sat next to each other for every episode of the next seven seasons, and watched the finale as our daughter slept upstairs.

Those were heady times, when everything seemed new. People went nuts for your continuity-driven concept, which seemed to flout every canard about TV's dwindling viewership. Rather than chase after an audience's attention, you demanded it, and promised to reward it as well. The heedless momentum of your real-time rush turned the rules of television inside-out. Rather than returning to the status quo ante at the end of every episode, you promised that things would change, and keep changing. There was no going back.

To be honest, I thought you were a bit full of yourself early on, acting as if the season-long story had never been tried before. You weren't the first, or my first. I don't know if I ever felt about you the way I did about "Murder One," with its exquisitely detailed take on a single murder trial, including an entire episode devoted to jury selection. (Ah, youth.) If only more people had seen what I saw, maybe that relationship would have had a chance, but I knew it was doomed from the start.

You took that idea and dressed it up in a shiny new suit, promising non-stop thrills rather than wonky legalese. And then there was the whole 9/11 thing. I know you don't like to talk about it, and it's easy to be glib. But you have to admit that, at least as far as you were concerned, the World Trade Center attack was a terrible stroke of luck. Sure, you cut out a few shots of an exploding plane in facile deference to the national mood. But deep down, you knew you were right where you wanted to be.

As audiences responded in growing numbers, everyone tried to lay claim to a little piece of you. Conservatives heralded Jack Bauer as a role model, and exploited the ticking-time-bomb scenario to make their political agendas seem more urgent and less debatable. Liberals bemoaned your scant regard for civil liberties, your quasi-fascist endorsement of the idea that free societies can only remain so with the aid of extralegal guardian angels. The New Yorker's Jane Mayer took you to task for making torture seem effective, even attractive, and providing dark inspiration to U.S. interrogators who saw themselves as real-life Jack Bauers. But it didn't seem quite fair to blame a TV show for the combination of intense pressure and a lack of ground rules that prompted those charged with keeping the country safe to look to their DVD sets for fresh ideas.

Like any product of a system as intensely profit-driven as network television, your ideology was flexible, which is to say opportunistic and situational. Clearly, you endorsed the idea that threats to national security had to be dealt with immediately, and harshly, but those threats came from within as well as without, inside governments that skewed both left and right, hawk and dove. The low point was your scurrilous portrayal of “Amnesty Global,” a human-rights group whose well-heeled lawyers turn up in the dead of night and spring suspected terrorists from federal custody, as if Amnesty International was staffed by sharkskin-wearing ambulance chasers in Prada shades. Making the lawyer Jewish was gilding the lily a bit, no?

In more subtle ways, you were positively progressive, most dramatically in your choice of commanders-in-chief. You gave us an African-American president two administrations before Barack Obama, and a female leader who combined gravitas with compassion. (It was worth sticking it out just to see Cherry Jones in the Oval Office.) In Gregory Itzin's Charles Logan, you created a deliciously repellant caricature of ambition run amok, a chinless, amoral and supremely cunning political animal who managed to escape jail time despite conspiring to assassinate a former president. He was just the adversary Jack needed -- devious, cowardly and utterly without remorse, and he lasted until (almost) the very end. Maybe longer, even, since his attempted suicide fell just wide of the mark.

I know these last few months have been difficult ones. It must be hard to look at the brass-band sendoff for "Lost," whose serialized story was made possible by your success, and not compare it to your own less-glorious finish. Cancellation always hurts, and a handful of desultory think pieces barely numbed the pain. No collectible magazine covers or wistful good-byes for you. A few years ago, your plot developments were major news, each prodded wound or electrical shock prompting a fresh wave of outrage. But that moment has passed, the bring-'em-on rhetoric replaced by lawyerly prose less conducive to pulse-pounding drama. A few weeks ago, Jack shot an unarmed woman in cold blood, and the zeitgeist rolled over and hit snooze.

And yet, the night after "Lost" gave its audience a big wet kiss in lieu of answers, you went out solidly on your own less grandiose terms. After a bloodthirsty rampage that climaxed with a corrupt Russian envoy taking a fireplace poker in the gut -- that, I admit, made me love you all over again -- Jack pulled back from the brink with the help of his ever-steadfast Chloe, whose sullen determination never failed to elicit a knowing chuckle on our couch. Betrayed by a president he once revered, Jack was left as a man alone, a ghost of liberty who dissolved in a hail of pixels and passed into the realm of myth. True, there was repetition here as well, echoing the final shot of your fourth season, with a purportedly dead Jack walking down the train tracks into a glowing sunrise. But at least there was no glowy white light, no promise that everything would be all right in the end. The world remained an unsafe place, for you and for us.

If nothing else, "24," you helped changed television forever, pushing the networks towards uninterrupted seasons and redefining the way the industry used DVDs to market their shows. Every time someone devours a complete season to prepare for the next one, they have you to thank. Your example also served as a warning on the dangers of stretching a story too thin. By the end, even you no longer believed in yourself, disregarding the laws of time and space to which you'd sworn such fidelity, compressing off-screen events in ways you would have shunned a few years before. The real-time concept became mainly a matter of structure: "in 20 minutes" meant after the next commercial; "in one hour" meant next week. It was probably for the best, and it beat all those filler scenes and plot contortions necessary to cover the drag of long car rides; even in your implausibly traffic-free Los Angeles, it took time to get places. There's no fighting the fact that ideals soften as we age, and principle gives way to pragmatism.

I'm glad it ended when and how it did. Part of me wishes you hadn't killed Renee, and left Jack with a final chance at hard-won happiness. But I know you've got a franchise to protect, and a movie in the works. Personally, I think you'd be better off letting go, but you've never been one to quit, even when you should. I think you know I've moved on; I'm more of a Mad Men person these days. But I'll always cherish the memories of our best moments, and the disappointments will fade in time. We'll always have Teri.

Sam Adams is a regular contributor to the Los Angeles Times, the Philadelphia Inquirer and the Onion A.V. Club, and a Contributing Editor at Philadelphia City Paper, where he edited the film section from 1999 to 2007. His writing has appeared in Entertainment Weekly, the Boston Globe, the Hollywood Reporter, Film Comment, and the National Society of Film Critics anthology, The B-List. He blogs at Breaking the Line and tweets as @SamuelAAdams.