Why "The Biggest Loser" is the most American show 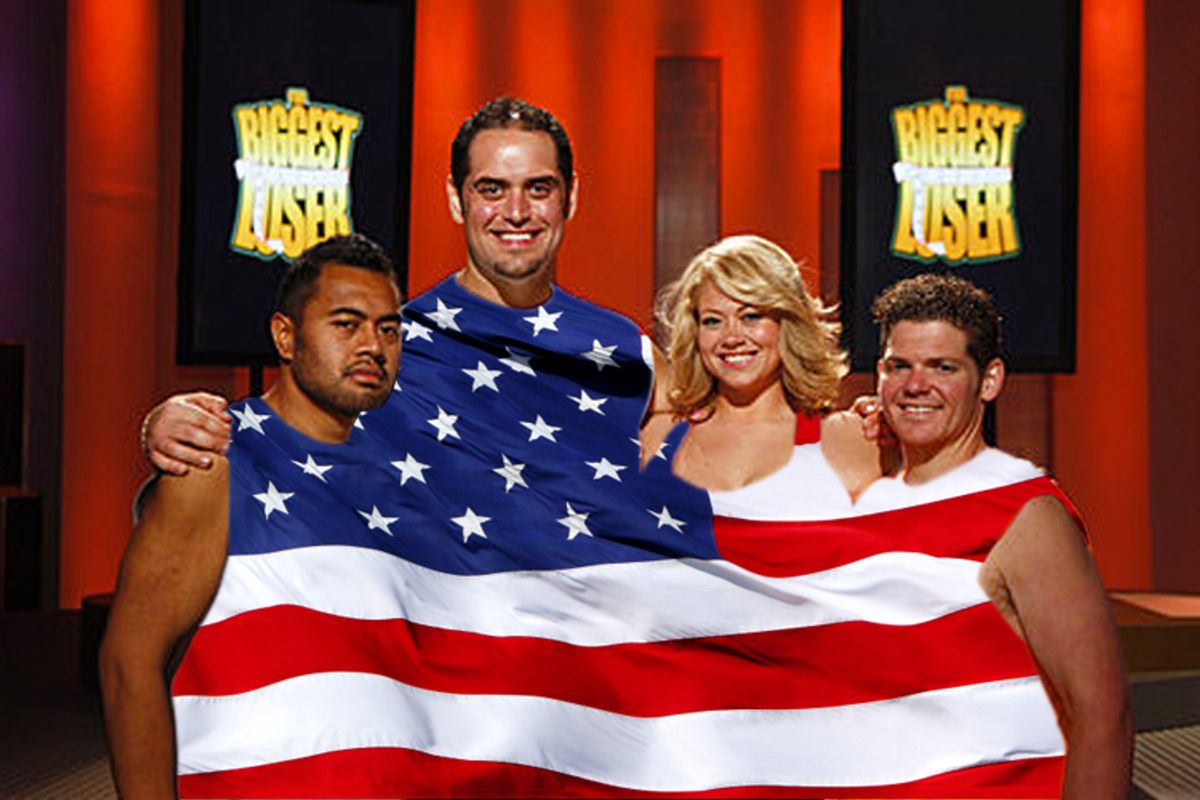 The finalists on "The Biggest Loser: Couples 3"
--

"America is watching," proclaims tattooed celebrity trainer Bob Harper, veins popping from his temples with each syllable, as if even his skull is ripped with muscles.

"I want to inspire America," says a still chubby young contestant in a bright T-shirt, huffing and puffing. He wipes his teary eyes and heads back toward the 24-Hour Fitness-sponsored gym's treadmills.

On NBC's "The Biggest Loser," "America" is a primary character, constantly referred to and revered as an all-knowing Big Brother-like entity. America is weak and fat and needs guidance. America is strong and able and will persevere. America is watching, so do it for America.

I'd like to meet this America they talk so much about. Don't get me wrong: America is definitely watching. "The Biggest Loser" is one of NBC's most reliable ratings successes, despite its time slot against the juggernaut of "American Idol."

But I can't help wondering if -- like me and my husband -- America is watching smugly from a ratty old sofa, while eating massive piles of fried Chinese food and congratulating itself on being only 5 to 40 pounds overweight instead of 200. Even on a recent episode of "House," the curmudgeonly doctor, for whom perversity is a religion, sits on his friend Wilson's couch glued to an episode of the weight loss-based reality show with a tub of ice cream and a spoon.

But I suppose the contradiction between weeping with contestants through their workouts and success while stuffing our own faces in stubborn protest is American itself. Where else can you dream of having your cake and bingeing on it, too?

In fact, "The Biggest Loser" may be the world's most American show, built on the same principles of capitalism and dreams that have long defined this country. As we prepare for the finale  of "The Biggest Loser: Couples 3" tonight, here are 10 lessons about American culture we can learn:

As red, white and blue as the show may be, it has aired in about 15 other countries. The original U.S. program launched in 2004 and international versions abound, from Asia and Hungary to the Arabic version, "Biggest Winner Arab." (Apparently, some people don't like being labeled "Losers.") In this incarnation, female contestants' burqas obscure their "before and after" shapes, likely rendering makeover episodes and weight loss reveals less dramatic.

2. There's No Such Thing as Bad Press

Despite pitfalls like a New York Times article exposing some contestants' post-show weight gain and lodging criticism about pushing already sick contestants too hard, resulting in hospital visits, injuries and unsafe tactics, "The Biggest Loser" continues to hold strong in the ratings department. The series only gains momentum and viewers as each negative story breaks.

3. America Gets Back on Its Feet

The producers' strategy in the face of criticism is genius and still manages to project a seemingly earnest agenda: In a recent episode on May 11, which followed the final week on "The Ranch," two previous contestants returned to offer guidance about at-home maintenance: Still svelte Season 7 winner Helen Phillips shared her success story, while once-again-obese Season 3 winner Eric Chopin talked about the pitfalls of bad days and "giving yourself passes."

While Chopin's weight gain is seemingly emblematic of "The Biggest Loser's" signature failure -- to mistake unsustainable and short-term weight loss for long-term life changes or emotional resolutions -- his attitude says otherwise: He is still grateful to the show, he willingly accepts personal responsibility for his lapse, and he's back to losing weight again, down 70 pounds.

The show acknowledges the "regain" issue, thereby voiding criticism. See, America gains weight. But that's OK because America can handle it. America is allowed to be imperfect. The only lesson America needs to learn is to love itself.

Trainer Jillian Michaels has lately also been plagued with scandal thanks to legal battles over her self-branded dietary supplements.

The label reads: "Two Capsules Before Main Meals and You Lose weight ... That's It!" People are suing for false advertising. Apparently, you have to get off your bum too and stop eating McDonald's religiously -- which, to be fair, is what Michaels explains on every damn episode. By the way, people, once you "pop" a Pringle, you really can stop. Campaigns aren't always 100 percent literal.

On the flip side, Michaels is being criticized for hocking "diet pills" at all, especially with ingredients that some say are "dangerous," others "ineffectual."  Either way, she thrives. The fitness fascist -- who is billed as "America's toughest trainer" because of her famed temper and who, as resident "Life Coach," is never satisfied until she draws tears -- has a new spinoff debuting next Tuesday called "Losing It With Jillian!"

5. America Is Not Afraid to Cry

During that same "last week on The Ranch" episode, I counted 30 instances of crying; 37 if you include my own blubbering. On this particular episode, some tears are happy (Sunshine feels beautiful!), some sad (Sunshine got sent home!), and some contagious (Sunshine's father, O'Neal, is proud!). Weepy moments come in response to individually screened weight-loss montages. Others are told in flashbacks with "ye olde" camera filters, as if they happened in 19th century saloons.

Crying is not specific to this episode, though. In fact, that week, the contestants felt so resolved/competitive that they were less apt to well up. But throughout the entire series, people sob constantly at makeovers, family reunions, confessions, breakdowns, moving realizations, lonely "fat kid" stories, sentimental goodbyes, triumphs, free cars, piles of untouchable doughnuts and, of course, weight fluctuation.

One major Michaels-induced meltdown is required for every contestant on the show. It may even be in the contract. During these intense moments, Michaels works out a contestant so hard that he or she "breaks" emotionally and collapses, sobbing about past traumas from family deaths to broken hearts. Despite a suspiciously unmoving forehead, the trainer sometimes chokes up too, having also "eaten her feelings" as a teen.

I suspect that some contestants keep trauma in their pockets to pull out on rainy days, so Michaels will give them sanctioned 15-minute breaks from working out. I would.

The best thing about this show is that we get to feel virtuous about our TV viewing thanks to various "Biggest Loser" initiatives to fight hunger and educate America about healthy eating. The network even manages to create moneymaking brand tie-ins for these charitable endeavors. For instance, a commercial for its "Pound for Pound Challenge" announces over 5 million pounds of civilian weight loss pledged and explains that for each pound 14 cents has been donated to local food banks. A group from Walgreen's of Southern California -- which has pledged more than 2,000 pounds -- is featured, as they volunteer to serve senior citizens at Feeding America's St. Francis Center. Isn't Walgreen's just dreamy? Sigh.

But in an age of TiVo and commercials easily skipped, "The Biggest Loser" is also famous for having some of the most obvious plugs. Contestants are instructed robotically by Michaels and Harper to save themselves from a life of bottomless obesity by eating Subway sandwiches, working out at 24-Hour Fitness, drinking water from a Brita, saving Jennie O. turkey in Ziploc's resealable bags and chewing Extra Sugarfree Gum. If that's not capitalism successfully at work, then I don't know what is.

Surely, you know this already.

"The Biggest Loser" is not just a TV show. That would be child's play. The brand -- led and produced by Reveille LLC -- also has a robust line of licensed merchandise that brought in an additional $50 million revenue in 2009, including workout DVDs, calorie-counting "bodybuggs," hats, duffel bags, mugs, '80s mixes, scales, water bottles, cookbooks, Wii Strength Kits, dumbbells, T-shirts, sport towels and the newest book: "Biggest Loser: Six Weeks to a Healthier You."

As if that's not enough, the brand also offers ways to enroll in the program via the Biggest Loser Club, an online fitness and nutrition tool that costs $19.98  for one month, $29.95 for three months, or $99 for a 12-month subscription.

Or, for the full experience (sans Michaels and Harper), viewers and their families can make reservations to visit the Biggest Loser Resort at Fitness Ridge in Utah, where a weeklong spa cuisine- and hiking-filled Boot Camp program starts at $2,195 per single individual.

Weight loss is generally a pretty good idea for obese people, right? Getting as thin as possible in order to win $250,000 may not be quite as healthy. Admittedly, extra sagging skin formerly stretched around chunky necks and stomachs does not flatter anyone's appearance, but certain contestants have returned to the finale looking a bit, well, anorexic. When Helen Phillips won the show, she was down 140 pounds to a mere 117 at 5-foot-6. And Season 8's crazy-eyed (and behaving) Tracey Yukich looked a little like a meth head at the end, though she was 132 pounds. Maybe she got her hands on some of Michaels' yerba mate and guarana-filled diet pills.

10. For America, Anything Is Possible

As the theme song says:

It's never too late to try. / What have you done lately to make you feel proud? / You could be so many people. / If you make that break for freedom!

This show offers people the chance to "change their lives" and live the American dream, as long as they're willing to face -- and cry about -- past troubles, change their eating habits (Yoplait Yogurt, anyone?), hock products, and exercise like crazy. The unfettered belief that one could at any point choose an entirely different existence is American at core. Only here do people believe that they're not relegated to their lot. Fame, fortune and a 24-inch waist are all just a resolution -- and a whole lot of squats -- away.

For now, as the finale of "The Biggest Loser: Couples 3" unfolds, I choose to eat orange chicken and white rice with my husband while watching reality TV.

And, as I shed an empathic tear or two for contestants, maybe I'll chew some Extra Sugarfree Gum. Maybe not. After all, America is a free country.