The former ambassador to the U.N. can't stop finding great reasons to launch preemptive wars in the Middle East 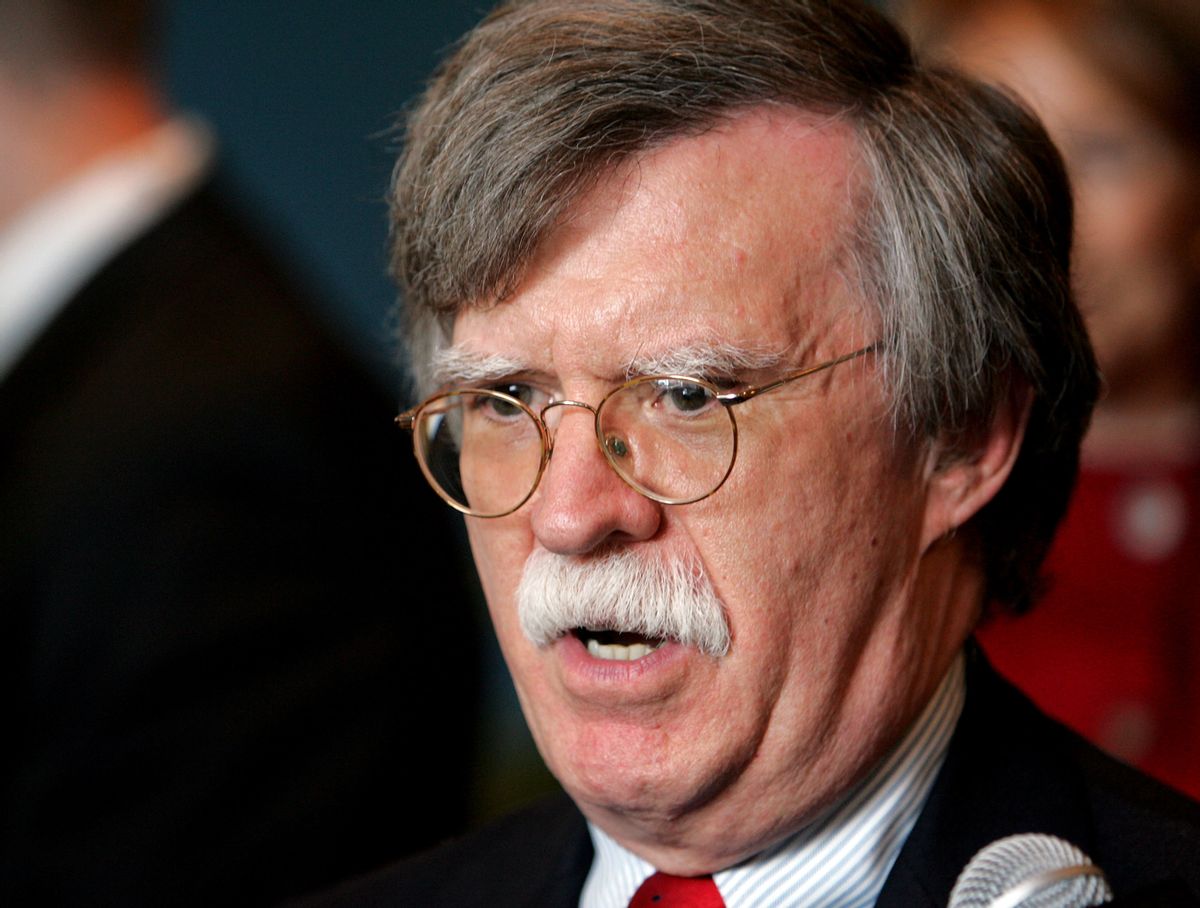 U.S. Ambassador to the United Nations John Bolton speaks to reporters during a lunch break from the voting of new non-permanent members of the Security Council outside the General Assembly at U.N. headquarters in New York October 16, 2006. REUTERS/Jeff Zelevansky (UNITED STATES) (Reuters)
--

The former U.S. Ambassador to the U.N. already advocated bombing Iran on the Wall Street Journal opinion page once this month (and last month, and the month before that), but North Korea's apparent torpedo attack on a South Korean warship earlier this year gives Bolton an entirely new reason to suggest an immediate preemptive strike against Iran:

Like those of its predecessor, the efforts of the Obama administration to stop Iran's nuclear program have failed. North Korea's nuclear-weapons capability undergirds its belief that it can commit acts of aggression with impunity and therefore shows unambiguously why we must stop Iran. It also shows that the Security Council is gridlocked and impotent. The risks are growing as our president cheers on a world in which unilateral American power is diminished.

That is from his conclusion. Don't worry, you didn't miss any supporting evidence that would make that bolded sentence seem in any way logical.

Bolton's suggestion for dealing with North Korea, the actual party responsible for what could be an act of war, is more sanctions. Seriously! Apparently sanctions only work on some crazy dictators.

Oh, he does have one more idea about North Korea, though:

Although not directly related to the sinking of the Cheonan, the U.S. should again declare the North as a state sponsor of terrorism, reversing one of the Bush administration's most shameful acts in delisting it.

John Bolton, among other neocon psychos, has long been obsessed with the idea that the single biggest mistake the Bush administration ever made was taking North Korea off the "state sponsors of terrorism" list. (This insistence is what led Bush himself to memorably call Bolton "not credible.") This recent unpleasantness has caused other chest-beating patriots to renew their calls to put North Korea back on that damned list.

Which sounds great, except for one small thing: This wasn't terrorism. It was "a military act against an enemy military." We don't just get to call anything foreigners do that we don't like "terrorism." (Otherwise Chris Martin would be facing a military tribunal by now.)

Anyway, the BP oil spill is clear and urgent proof that we need to bomb Iran right away.