Why "Sex and the City" won't go away

Say what you will, this franchise still offers the best insight into the complications of modern womanhood 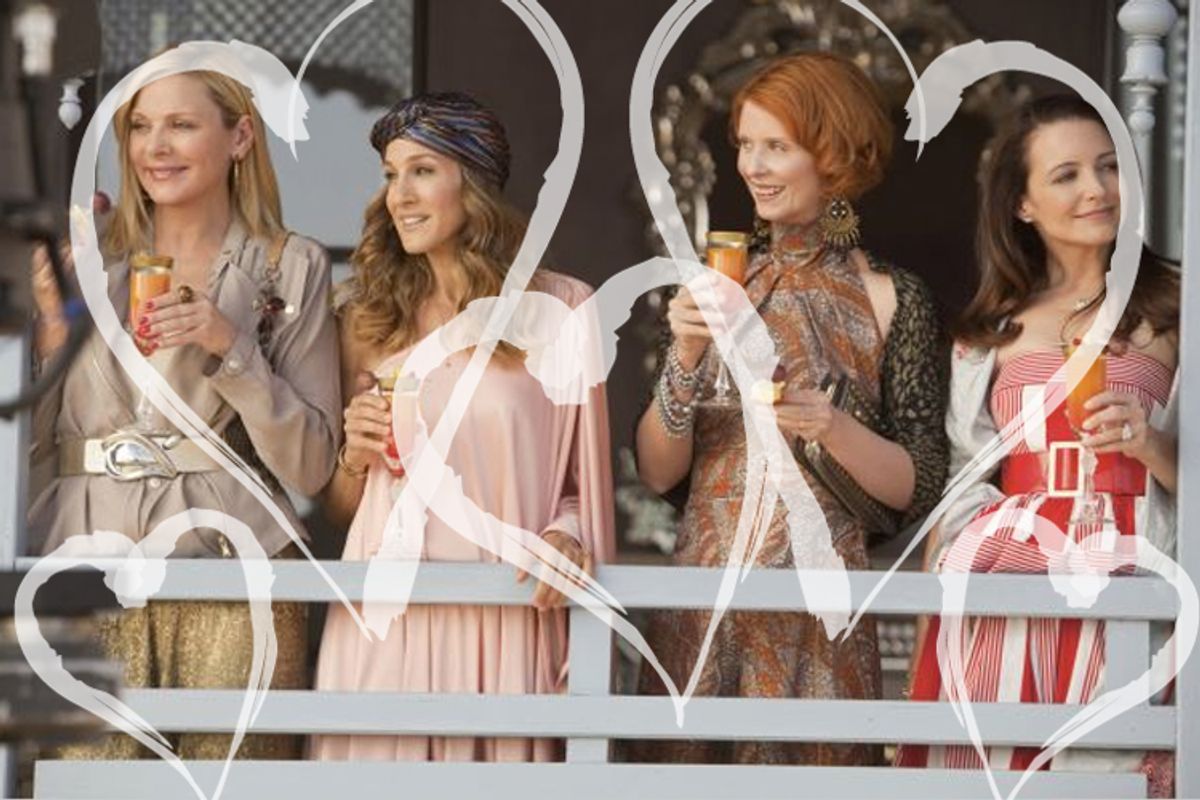 Women can't have it all. We hear this over and over again. We have to choose one oversimplified path at a time: Overworked career woman or nurturing mommy/housewife? Coy, fun-loving single temptress or lovelorn hopeless romantic? What, you can't choose just one? You have a career that matters to you, but sometimes you want to ditch it just to bake cookies and get your toenails painted? You have a great husband and kids, but sometimes you wish you could travel the world or just put on a dress and dance to Alicia Keys?

But a woman who's complicated enough to want more than one thing is a woman who's getting it all wrong, as far as American culture is concerned. Rebecca Traister outlines these messages beautifully in her recent article "Screw Happiness": That career is going to prevent you from having a baby! That baby is going to prevent you from having a career! Juggle a career and a baby and you're destined to be miserable! Those boyfriends just aren't that into you! That husband is only going to leave you! Those children will grow up and resent you, and then they'll move out and leave you all alone -- with a neck that you feel bad about!

Everything a woman does, from the cradle to the grave, is a big mistake, and every step of the way, every choice you make, a Greek chorus is there to say, "See? I told you this would happen, but you just wouldn't listen."

Enter Miranda, Charlotte, Carrie and Samantha, the yin, yang, yenta and yeah, baby! of the female psyche. These four archetypes transcend the plucky but bland heroines of romantic comedies like gigantic glowing goddesses, delivering ordinary women from their daily bread of self-flogging by serving up a rich, bountiful platter of slinky dresses, teetering shoes, glossy hairstyles, greased-up hunky boys, and hot sex that will soon be recounted over clinking cosmopolitans. Far from the flat, oversimplified girly-girl TV show that ambivalent onlookers make it out to be, "Sex and the City" always offered an escapist fantasy that integrated the different options of womanhood into a cackling, four-headed hydra of boozy, chuckling, winking delight.

By living vicariously through these four, we not only get to make all of the various choices that we're told will ruin our lives, but we also get to purge all of our anxieties and fears about ourselves and our lives (we're lonely, we're tired of working long hours, our husbands aren't helping enough with the kids, we're getting older, we can't stop eating cupcakes) -- unself-consciously. Yes, of course there are dark nights of the soul, even for the Fab Four. But when Miranda, Carrie, Charlotte or Samantha struggles with crow's feet or career fatigue, you know that they'll make it cathartically funny. And in the case of "Sex and the City 2," you'll be safely embedded in a movie theater packed to the brim with women and gay men, far from the merciless masses who encounter any vaguely feminine complaint or insecurity with open contempt.

Which is not to say that "Sex and the City 2" will be a masterpiece. Choosing Abu Dhabi as the foursome's fantasy vacationland is more than a little odd, considering that the United Arab Emirates is a country where husbands have a legal right to beat their wives (as recently pointed out in the Guardian).

And, as always, the movie will be filthy with the excesses of the upper-crust, lily white New Yorkers. In the trailer, we see Carrie pausing to take in the glory of her enormous, studio-apartment-size walk-in closet, right before she laments that her gorgeous life with her gorgeous husband has left her in some unsatisfying nowhere land between hot sex (cue Samantha growling) and adorable babies (cue Charlotte, baking cakes covered in pink icing). The cushy job, the spa treatments, the couture madness, the delightful brunches with your three bestest friends? Not all that they're cracked up to be, apparently. Even with every single marvelous gift in the universe in her clutches, Carrie can find some way to be whiny and neurotic.

But then, the exaggerations and clownishness of "Sex and the City" have always been a big part of its odd appeal. The cathartic escape that this franchise offers, the way it builds on smartly written characters that we've known for decades, can't be underestimated. Although these four characters may be archetypes, they don't speak in watered-down sweetness or self-deprecating cutesiness or clichés the way female characters in other supposed chick flicks do. Set aside the sparkly shit and the party music and you'll see that these are carefully drawn characters. These women aren't perky, down-to-earth, sweet girls who stumble into mud puddles or need a suave sugar daddy to fill up the bubble bath and save them from a life of prostitution or worse, working for some mean boss-lady who doesn't have a nurturing bone in her body. No. All four characters here are strong and assertive and also get floored by their emotions on a regular basis. They try too hard, they throw themselves into this job or that man, and they fumble, but they're never so far gone that they can't take a shower, put on a little lip gloss and grumble over a nice mimosa. Upper-class fairy tale? Most definitely, but what do you expect? Gals who have sweet little chats while fumbling through the racks of Ross Dress for Less? Ladies who dish over hot dogs from the Target snack bar? Christ, we only have a few hours away from home with our friends to see this thing, so let's make it count with enough hairspray and chiffon and giant diamond rings and meat Chiclets for a "Lawrence of Arabia"-themed gala at Liberace's Las Vegas mansion. Good taste and discretion are as beside the point here as old-fashioned family values, fiscal responsibility and hard work.

At least these women bicker and sob and swoon in ways that are both sharp-tongued and vaguely realistic. Even when Carrie predictably wavers and Miranda gets grumpy and Samantha cheats and Charlotte giggles nervously, at the core of this story there are four sharp, resilient women with a lot of nerve.

Of course, it's hard to care all that much about whether Carrie and Big end up together, or whether or not Carrie ends up sleeping with her drippy ex-boyfriend Aidan (John Corbett). Carrie was always the least of our concerns, a distant second to our fixation on Charlotte's happiness, Miranda and Steve's ultimate compatibility, Samantha's admirable insistence on sallying forth unburdened by husbands and children. (And please notice that Samantha isn't one to use words like "cougar" or yelp her lines desperately. She savors her sleaziness and wears it with so much pride that it's impossible not to want her to keep up the insatiable sexual predator routine forever.)

Any movie that women choose to see in droves will immediately be written off as silly, and it's easy enough to predict that "Sex and the City 2" will be deeply silly in plenty of ways. But while these four characters may have devolved into a cliché of housewifery or slutting around or career burnout at various points, they still, rather stubbornly, embody aspects of any woman's struggle -- absurdly overpriced shoes and gargantuan bolero hats aside. Whether Miranda is embarrassed because the Chinese restaurant she orders delivery from recognizes her voice each week or Charlotte is shocked at her own temperamental outburst after her latest fertility shot, when Carrie finds herself obsessed with Big even though he's moved on or Samantha can't help rolling her eyes at her younger boyfriend's naive take on the world, we're reminded of the bumps in every yellow brick road. Somehow the "Sex and the City" franchise manages to capture these bumps in the road without demeaning these women beyond recognition.

The truth is that there just aren't that many smart, fun stories about women friends to choose from -- others have tried, and mostly failed. It's no small feat to tackle the female psyche, to capture the ways that women worry and second-guess their intentions, the ways that they try to become better, more mature, more reasonable human beings while beating back their own petulant, self-pitying impulses. Spoiled though they may be, the women of "Sex and the City" always lay bare the vulnerabilities of womanhood without plunging so far into the darkness that everyone ends up depressed.

Because once everyone dries their tears and hugs and pledges to be Best Friends Forever (something that really doesn't happen nearly enough in real life), then someone cues the Beyoncé and a rainbow of cocktails appears and everyone is wearing over-the-top "Alice in Wonderland" dresses. The camera swoops down over a disco ball and zooms in on four women who don't mind snickering and toasting and high-fiving, because no matter how absurd that might look from the outside, it doesn't really happen enough in real life, either (unless you happen to be starring in your own reality show on Bravo).

But it really should happen more. Because the older women get, the more we enjoy each other's company and understand each other, the more we tell each other the truth and laugh together and see, clearly, that we're essential to each other. Once we're old enough to stop denying big swaths of ourselves for the sake of appearances, once we no longer hide ourselves just to adhere to some mythical image of what is acceptable, appropriate, professional or feminine, we can admit that we're sometimes romantic and naive -- and ambitious and independent and proud. We want to be career women and housewives and temptresses and gossips and good friends and we want to be taken seriously and heard and trusted and understood, and we also want to sit by a cornflower blue swimming pool in a gold lamé bikini and high heels and cackle loudly while listening to Jay-Z. "Sex and the City" caters to a female friendship fantasy, but it never pretends that women are one-dimensional. Women are complicated. It's about time we -- and the world -- learned to celebrate it.

Movies Sex And The City