Following international protests and concern over a hunger strike, Jafar Panahi is released on bail 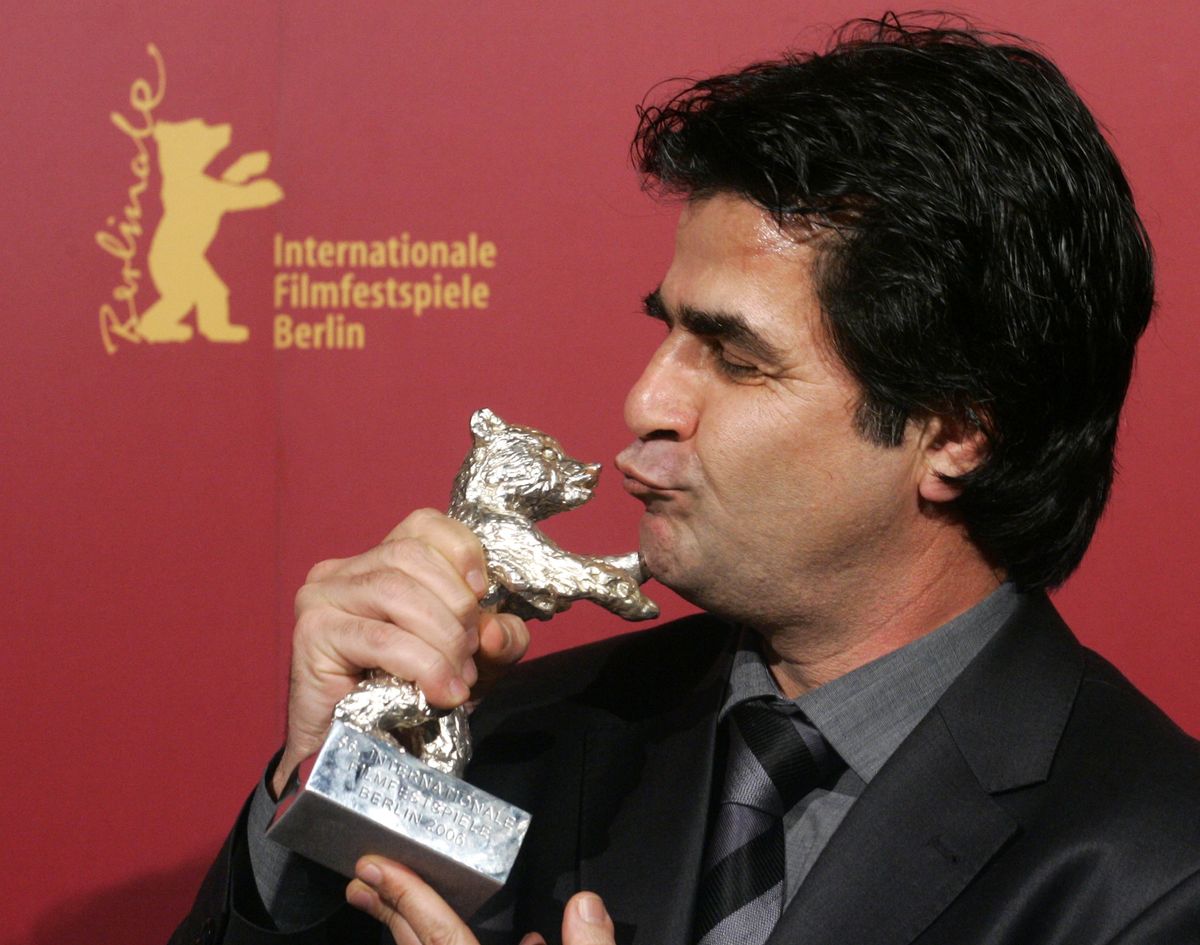 Iranian director Jafar Panahi poses with his Silver Berlin Bear after the awarding ceremony at the 56th Berlinale International Film Festival in Berlin February 18, 2006. Panahi won the Grand Prix of the Jury for his film 'Offside'. REUTERS/Arnd Wiegmann (Reuters)
--

On Monday, international news services reported that Iranian film director Jafar Panahi, who has been imprisoned in Tehran's infamous Evin prison without charges since March 1, would be released on bail. Reports quoted Tehran's public prosecutor, Abbas Jafari Dolatabadi, as saying he had met with Panahi in prison last Thursday and accepted his request to be released pending trial. Panahi, who has a heart condition, was already several days into a hunger strike, so the announcement of his release, whatever it portends for his legal future, bids to alleviate immediate concerns over his health.

The news came after steadily mounting international protests over Panahi's incarceration. Beginning in March and accelerating in April, special screenings, discussions and petitions regarding Panahi's plight were held in numerous cities in Europe and the U.S. On April 30, a letter signed by prominent American filmmakers including Steven Spielberg, Martin Scorsese, Robert Redford, Oliver Stone and the Coen brothers protested the detention, saying, "Iran's filmmakers should be celebrated, not censored, repressed, and imprisoned."

The recent epicenter of support for the director, however, was the just-concluded Cannes Film Festival, which had invited Panahi to serve on its jury and kept an empty chair for him as a reminder that the Iranian regime had not taken the opportunity to release him as a gesture to the international community. During the festival, Abbas Kiarostami, Iran's most globally renowned director and a mentor and sometimes-collaborator of Panahi, issued a statement calling for his release, as he had shortly after the filmmaker's arrest in March. During the press conference for Kiarostami's new film "Certified Copy," the announcement that Panahi had just begun a hunger strike caused Juliette Binoche, the film's star, to burst into tears, an event widely reported in the media. At Cannes' closing ceremony on Sunday, Binoche continued her support, displaying a sign emblazoned "Jafar Panahi" on stage after winning the festival's Best Actress trophy.

Unusually for an Iranian director, Panahi's career to date has played out almost entirely on the world stage. His 1995 debut feature, "The White Balloon" (scripted by Kiarostami), won the prestigious Camera d'Or prize at Cannes and went on become the Iranian cinema's first art-house breakthrough internationally. Both that film and his sophomore outing, "The Mirror" (1997), were regarded as pleasing works very much in the mold of Kiarostami's films about children and cinema. It was only with 2000's "The Circle," a group portrait of oppressed women, that Panahi's work took a darker, more socially critical turn. Like the subsequent "Crimson Gold" (2004), about a suicidal criminal, and "Offside" (2007), a politically charged story about soccer mania in Tehran, "The Circle" won wide international acclaim but was banned in Iran. (Ironically, this elevated Panahi's renown in Iran, where banned films are widely available on DVD.)

The challenging views of his last three films notwithstanding, Panahi has not been known as politically outspoken. Like many moderate Iranians who've chosen to live and work in Iran, however, his life seems to have been affected by last June's contested presidential election and the brutally repressed protests that followed. In late July, he was detained after attending a demonstration in honor of Green Movement martyr Neda Agha-Soltan, but was released after a brief detention. Subsequently, his passport was confiscated, cutting him off from international film festivals and overseas film producers.

While the Islamic Republic attempts to keep tight controls on artists and intellectuals, it has also played an important role in supporting Iran's cinematic renaissance and sometimes can appear surprisingly image-conscious in cases that draw international attention. When Panahi's house was raided on March 1 and he was taken into custody, many observers saw it as a typical case of symbolic intimidation, expecting that the point would be made and he would be released within a few days, as has happened previously with filmmakers such as the provocative female director Tahmineh Milani. Instead, some weeks later, reports leaked that the government planned to charge him with making a "subversive" film in his own home about last summer's events. Supposedly the film tells the story of a family caught up in the turmoil, including a son raped in prison. Panahi's family has denied he was making a political film, but the charge is a serious one.

Jamsheed Akrami, a New Jersey-based film professor who has regular contact with Panahi's friends and family in Tehran, told me he thinks the government would already have released incriminating evidence against Panahi if it had any. (Security forces reportedly seized computers and tapes from his house.) "If he is going free on bail, the assumption is he'll have a trial at some point," Akrami said in an email. "But I wouldn't be surprised if there is no trial at all. A trial could bring more embarrassment to the government.

"I think Panahi's refusal to cooperate with them prolonged the case," he added. "They just realized they couldn't intimidate Panahi. I consider that to be a great moral victory for Panahi and people like him. We have a lot of them in Iran. But they are not as well known as Panahi, and are sadly paying much heavier prices."

Godfrey Cheshire is a New York-based filmmaker and critic who has written extensively about Iranian cinema.