New Orleans shrimp: Before and after the disasters

When I was growing up, the city was a food-filled wonderland. But now its delicious crustaceans could disappear 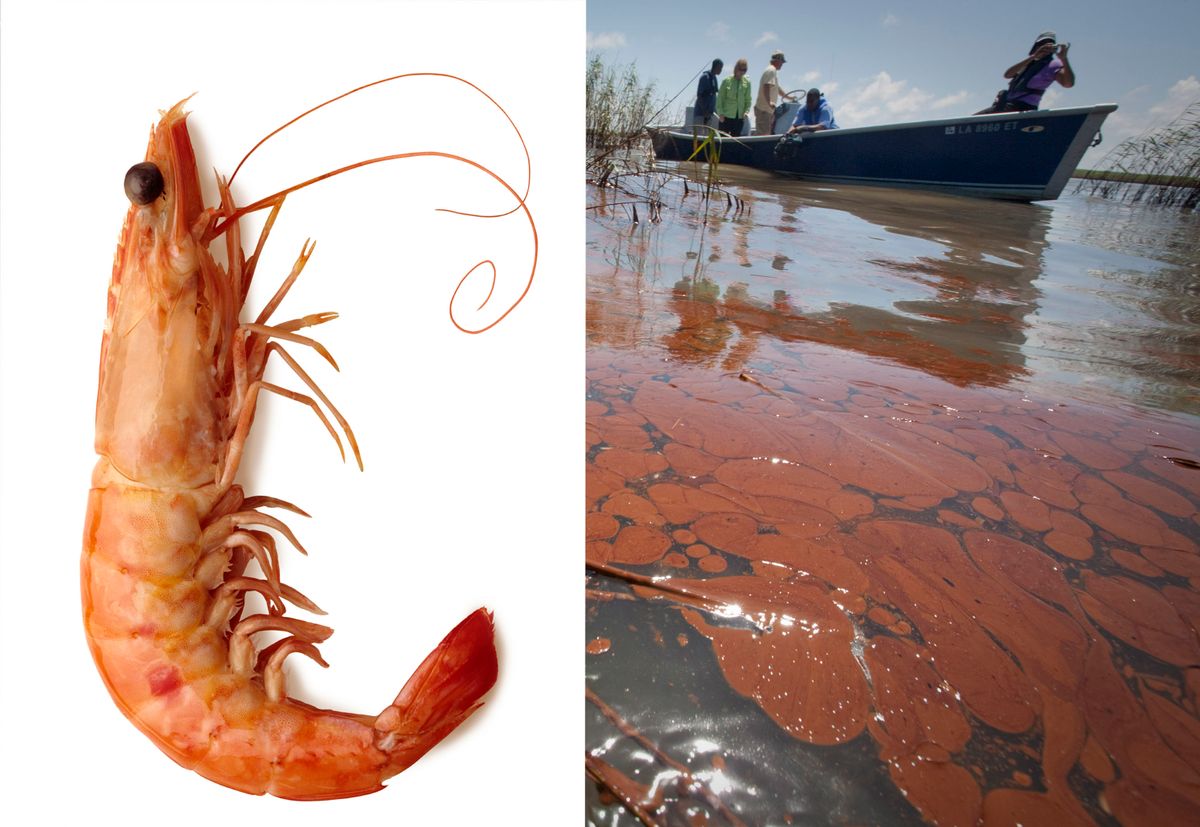 A boat passes through heavily oiled marsh near Pass a Loutre, Louisiana May 20, 2010. For nearly a month, roughly 5,000 barrels (210,000 gallons/795,000 liters) of oil per day have been gushing from BP's broken Deepwater oil well situated in the Gulf of Mexico, in what could be named the worst oil spill in U.S. history. REUTERS/Lee Celano (UNITED STATES - Tags: DISASTER ENVIRONMENT) BUSINESS ENERGY) (Â© Lee Celano / Reuters)
--

My first trip to New Orleans was in 1981. I was 6 years old and had just transplanted from New Jersey to Pensacola, Fla. Pensacola is the older, slightly less promiscuous sister of New Orleans. The history, architecture, music and food are echoes across Interstate 10, bouncing back and forth through Mobile, Biloxi and little towns like Pass Christian, Spanish Fort and Bayou La Batre. As a kid, we played them all in football and the girls dated the boys they met at church camps tucked into the Alabama pine forests.

I was a 6-year-old accustomed to the stony establishments of Philadelphia, New York, New Jersey and Washington, D.C., so New Orleans looked like a foreign country to me. Our family, which fanned across the metroplex, lived in shabby colonial- and federal-style houses that looked nothing like the wooden cracker boxes lining the streets of New Orleans. Stepping out of a car or a house in the Deep South is like being hit in the face with a hot, wet towel. Even at 6 I didn’t understand why the dry, cold north was set in stone and the hot, wet south was dressed in slowly rotting wood.

As the years went by, I spent a lot of time in New Orleans, especially after my father joined a Mardi Gras Krewe. Instead of a sweet 16 party, I was set loose in the city with my boyfriend, long before a cellphone could have helped us. In the '80s, while the rest of the teenagers in America dreamed of running away to Hollywood, several of my friends had already run away to New Orleans. Back then, it was like a giant slumber party with kids crashing wherever they passed out in whatever house could be procured by other kids old enough to sign a lease and get a job in a restaurant or hotel. For me the city was a commune of runaways, vampire wannabes and hangers-on.

I may not have had the money to hit the high-end restaurants, but I knew that if you knocked on the door of the broken-looking hotel on St. Charles, just past the Dunkin Donuts and Wendy’s, $2 covered you into the "Hotel Warren" where an enterprising underage lady could procure a full Dixie Cup of Jagermeister for the princely sum of an additional $2. Try finding that in your Lonely Planet Guide.

Drinking may have been entertainment, but so equally was the food. Puffy clouds of fried dough called beignets, raw oysters sold out of the back of a pickup truck in Storyville that had newspapers spread across the tailgate and a smattering of oyster knives open for public use, high school field trips to Paul Prudhomme’s cooking school just off Jackson Square, giant hubcap-shaped muffulettas dripping with olives and dressing and the ever-present shrimp.

Shrimp came in plastic bags, Styrofoam coolers, little tin takeout boxes, laundry baskets lined with garbage sacks full of ice and in butcher paper cones sold in the French Market. While you tore off the heads, you could hear the ping-pong echo of the vendors watching little rabbit-eared black-and-white TVs while the Saints got their hopes up, then the roar of thousands wafting on the wind from the Superdome. There were voices in a dozen accents screaming, "WhoDAT?!?" or "NOOOooooo!" My favorite of those paper cones held "Barbeque Shrimp" -- shrimp cooked in a tangy, smoky butter sauce with their heads left on. The funny thing about this dish is that it never sees a grill, it just tastes like it does.

There are a lot of negative things that could be said about even pre-Katrina New Orleans. My own father says that when the levees broke it was God trying to flush the toilet. Harsh, but the New Orleans that Emeril Lagasse and John Besh are selling on television is not the reality for most of the residents. The median income for a pre-Katrina New Orleans resident was just over $27,000 in 1999. In 2000, 67.3 percent of the residents were African-American, yet only 27 percent of businesses were owned by African-Americans.

Years later, you need never to have stepped foot into New Orleans to understand the horror of Katrina. I still can’t think about it and I am ashamed to say I haven’t had the heart to go back yet. I am hoping if I ignore it all long enough that in a few years, when the kids are older, when the money is better, when … when …

Now "when" has gotten much longer. A giant slick of oil is closing in on the destiny the Gulf states share. Shrimping is being shut down. My hometown outside of Pensacola is bracing for the apocalypse. We’re all used to it. The hurricanes come and wipe us off the map every few years. We all know what to grab when we have to decide which objects can define our lives and fit in the trunk in case there’s nothing left when we come home again. This time it’s different, though. It’s a long, slow Bataan death march toward the unthinkable. The oil is coming and it’s still leaking.

I have roughly 20 pounds of wild Louisiana shrimp in my freezer. If you have some at your grocery store, you should buy it now. Everything that New Orleans was is now covered for me in a fine patina of pain, grief, loss and soon … oil. Just as we thought things were getting better. You may not know what it means to miss New Orleans, but you’re about to find out what it means to miss shrimp not raised in Asia.