No longer useful, Tea Partiers -- like Tim D'Annunzio, who believed he was the messiah -- face party backlash 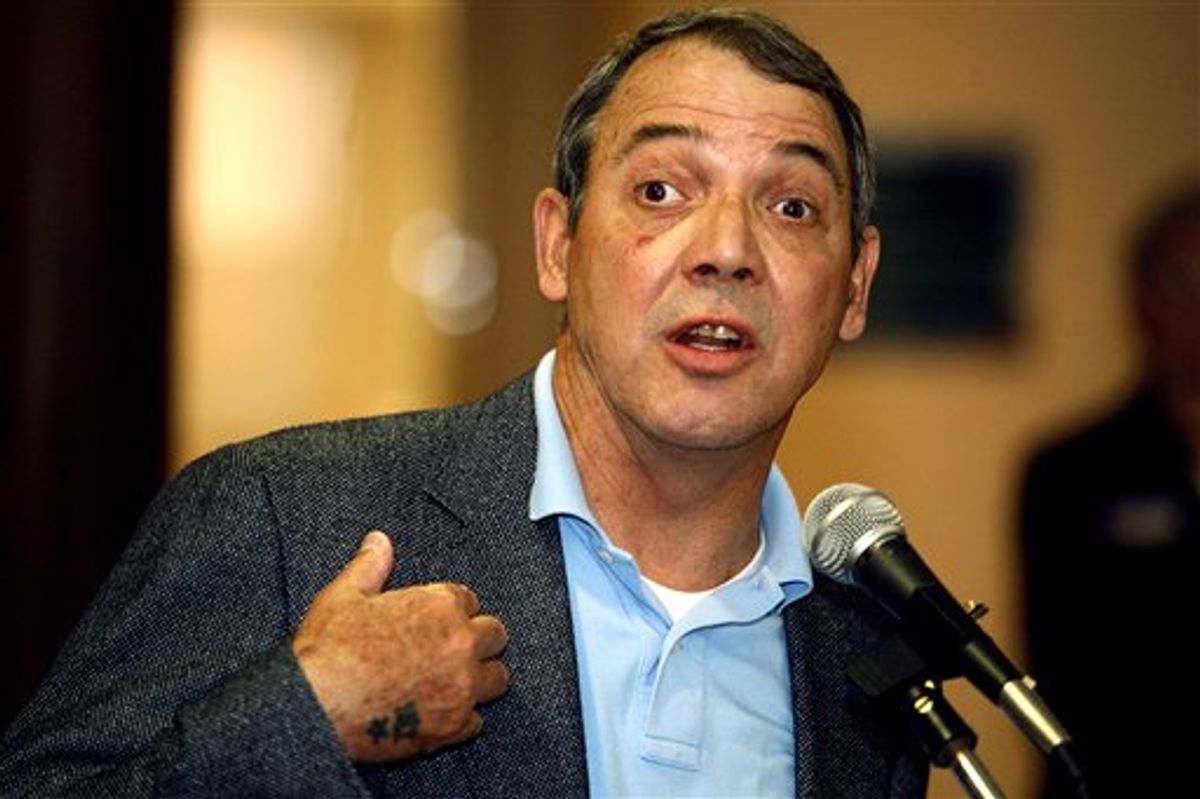 Conservatives have spent the past year or so gleefully citing the Tea Party phenomenon as evidence of the president's unpopularity. This was always a fantastical claim: the arrival of a new political movement doesn't tell us more about public opinion than, you know, actual measures of public opinion. But it was an easy weapon to hand, so there it was.

But in wielding the Tea Party as a rhetorical cudgel against the president and his party, elite Republicans made a crucial miscalculation. By making the approval of the Tea Partiers the measure of legitimacy, they entrusted their own fate to this new group of activists. And now the establishment of the GOP is stuck trying to wrest control of the party back from these ruffians, whom they wanted to exploit without actually empowering.

Out of North Carolina today, there's a story about Republican leaders trying to put the skids under the congressional campaign of Tea Party candidate Tim D'Annunzio, who’s running to challenge vulnerable Democratic incumbent Rep. Larry Kissell. The state Republican Party has been publicizing D'Annunzio's past run-ins with the law and his questionable sanity. Apparently, the guy went through a phase in the 1990s in which he claimed to be the messiah and had a lot of theories about the Ark of the Covenant, 1,000-mile-high pyramids, the New Jerusalem -- you get the picture.

"Mr. D'Annunzio has disqualified himself by his background, his record and his behavior," says the GOP state chairman, which is a pretty strong line for a party chief to take on an ongoing primary. Still, given D'Annunzio's, shall we say, colorful past, it's little wonder that the party is eager to be rid of him.

D'Annunzio acknowledges a "troubled upbringing" but says that the party is just engaging in dirty tricks to keep power now. "The bigger story is that the power brokers in Raleigh and in Washington are willing to go to any length and use any unscrupulous tactic to try to destroy somebody. They think that they're losing their control over the Republican Party." And some D’Annunzio supporters, at least, look like they’ll interpret the fight as evidence of their candidate’s independence. "He's not the kind of person the parties can rule over and manipulate," said one.

Whether this guy is a nutcase, there's obviously something happening here. North Carolina isn't the only place where the GOP is trying to put a lid on the Tea Party. We saw it in Kentucky in the primary race between Trey Grayson and now-nominee Rand Paul. There's also a similar conflict playing out in Nevada, where Tea Party favorite Sharron Angle may or may not be surging past Republican front-runner Sue Lowden for the right to challenge Senate Majority Leader Harry Reid in the fall. Reid may be toast against Lowden, but he might have a shot against the less-known and more extreme Angle.

This tension is an inherent part of running a political party, especially when the issues on the national agenda are making the party base restive. Political scientists have long been aware of the natural conflict between the "professionals" and the "purists." What the professionals want is to get and hold power; what the purists want is to enact their agenda. The professionals have some use for the purists: they can point to them as evidence of a popular base, they can use them to staff campaigns and organizations and mine them for fundraising. But they won't risk actually turning power over to the activists.

This is true, of course, of both parties. Early last decade, we saw a similar fight play out around the presidential candidacy of Howard Dean. The general sense of a self-dealing elite that would prefer to sacrifice cherished principles than to lose power is arguably the single most important factor contributing to the current state of discredit of our political institutions.

Viewed from a partisan Democratic vantage point, there's something satisfying in seeing the GOP turn against its own. Surely, there'll be more of this to come, especially as the Republican presidential primaries get going. But Democrats shouldn't celebrate too much. After all, activists on the left have been reminded, repeatedly, of the limits of their own power in the face of centrist, technocratic expertise. The Tea Party and activist liberals are hardly allies. But they share, at least, a common set of problems -- and they probably always will.