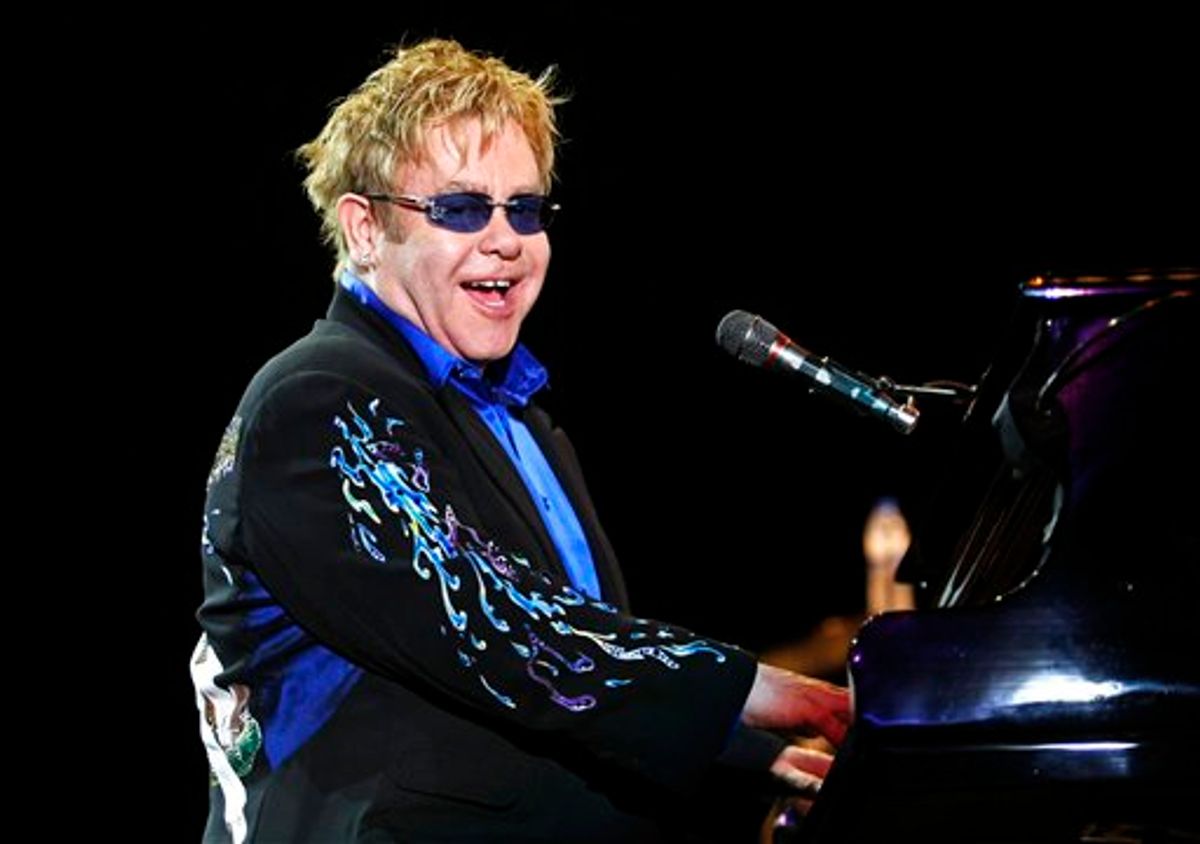 British singer and composer Elton John performs during the Rock in Rio music festival Saturday, May 22, 2010 in Lisbon, Portugal. (AP Photo/ Francisco Seco) **EDITORIAL USE ONLY, NO SALES** (AP)
--

A concert by Elton John is testing the limits of Morocco's drive for modernity, probing this Muslim nation's complex and ambiguous attitudes toward homosexuality like rarely before.

Islamists in the North African kingdom are outraged by the gay pop star's visit, while the royal palace, government and his many fans back his appearance Wednesday night.

It's part of a tussle between conservatives and modernizers in a nation that criminalizes homosexuality but has long been famous for a swinging party scene. Morocco has attracted gay celebrities such as designer Yves Saint Laurent and writer Paul Bowles, and recently saw the launch of its first gay magazine.

Across the Islamic world, strictly hidden but sometimes tacitly tolerated traditions of homosexuality are surfacing fitfully -- and John's concert is the latest litmus test.

The public dispute between organizers for the Mawazine Festival that invited John and the Justice and Development Party, or PJD, Morocco's largest authorized Islamist group, illustrates the growing rift between Western-leaning Moroccan authorities and the more conservative Muslim movements that are on the rise in the kingdom.

"This singer is famous for his homosexual behavior and for advocating it," said Mustapha Ramid, a leader and spokesman for the PJD, the biggest opposition party with 40 lawmakers in parliament.

"We're a rather open party, but promoting homosexuality is completely unacceptable," Ramid told The Associated Press in a telephone interview.

Ramid said homosexuality is against Muslim values, and he feared the British singer would "encourage the phenomenon" and be a bad influence for Moroccan youth.

Like nearly all Arab and Muslim countries, Morocco is officially hostile to homosexuality. Homosexual practices are a crime punishable by fines and prison sentences of six months to three years. In practice, however, such penalties are almost never applied, and Morocco has a long history of leniency toward homosexuality or other practices forbidden by Islam, like drinking alcohol.

Though most observers consider homosexuality common in the Arab world, most Arab countries frequently crack down on gays. Simply mentioning the topic is often taboo, and Morocco is viewed as an exception simply by allowing the public debate.

Moroccan officials dismissed the calls to ban John from performing.

"We deal with artists and intellectuals for what they do, without taking into account their private life," said El Hassan Neffali, an organizer of the Mawazine Festival. "Somebody's private life is one thing, and their art or creative activities are another."

The festival is under the patronage of King Mohammed VI -- a powerful gesture in a country that remains an absolute monarchy and where the king, a descendant of Islam's Prophet Muhammad, is also "Amir al-Mumineen," or commander of the believers.

Moroccan officials acknowledge that they back the festival, along with dozens of others through the spring and summer, as a means to promote cultural diversity and openness in society. The cultural drive, along with new schools, housing projects and a vast program to reform the official teaching of Islam, is viewed as part of the king's broader plan to modernize society while offering an alternative to the Islamist groups that have become the country's biggest political force.

Abdellah Taia, a Moroccan writer and its most prominent gay advocate, said that while Moroccan gays continue to suffer from abuse, the country is evolving faster than any other in the Arab world. He noted that even the official Le Matin newspaper, considered the mouthpiece for the royal palace, came out strongly in support of John's visit.

"Have we (Moroccans) become so intolerant that we refuse and fight differences, which are to humanity what seasons are to life?" Le Matin said in backing the concert.

Taia -- who lives in France -- said, however, "I just wish they'd extend the support they give Elton John to ordinary Moroccan gays."

A sign of Morocco's evolution, Taia said, is the creation of a new local word to describe homosexuality in Arabic: "Mithly," replacing the pejorative usual phrase of "an act against nature."

The first gay magazine in the Arab world, called Mithly, appeared last month in Morocco, although it is sold under the counter because it didn't get a distribution license. The gay rights group that publishes it -- one of the first in any Arab country -- is based in Spain.

The 63-year-old entertainer was expected to draw tens of thousands of viewers Wednesday night during his free concert, to be held in an upscale neighborhood of Rabat, the capital. Other entertainers performing at the May 21-29 festival include Sting, Mika and Carlos Santana, along with Arab music stars.

In an apparent move to defuse possible tensions, John is the only festival artist who wasn't scheduled to meet with the local media.

In Egypt, tentative plans to schedule John were canceled this month. Mounir el-Wasimi, the head of the Egyptian musicians' union, warned against the singer's possible visit in a statement that said he was "a symbol of homosexuals in the world."

El-Wasimi said the statements were unacceptable because Muslims consider Jesus a prophet.

In London, John's publicist said the singer would make no comment.

Morocco's PJD and other conservatives have regularly criticized the Mawazine Festival, saying it promotes promiscuity and artists who don't abide by Muslim morals.

The free concerts usually draw huge crowds. Eleven people were killed and about 30 hurt last year in a stampede after a concert. Organizers say they have boosted security this year.