In the last episode before tonight's finale, Crystal dominates and Lee flails 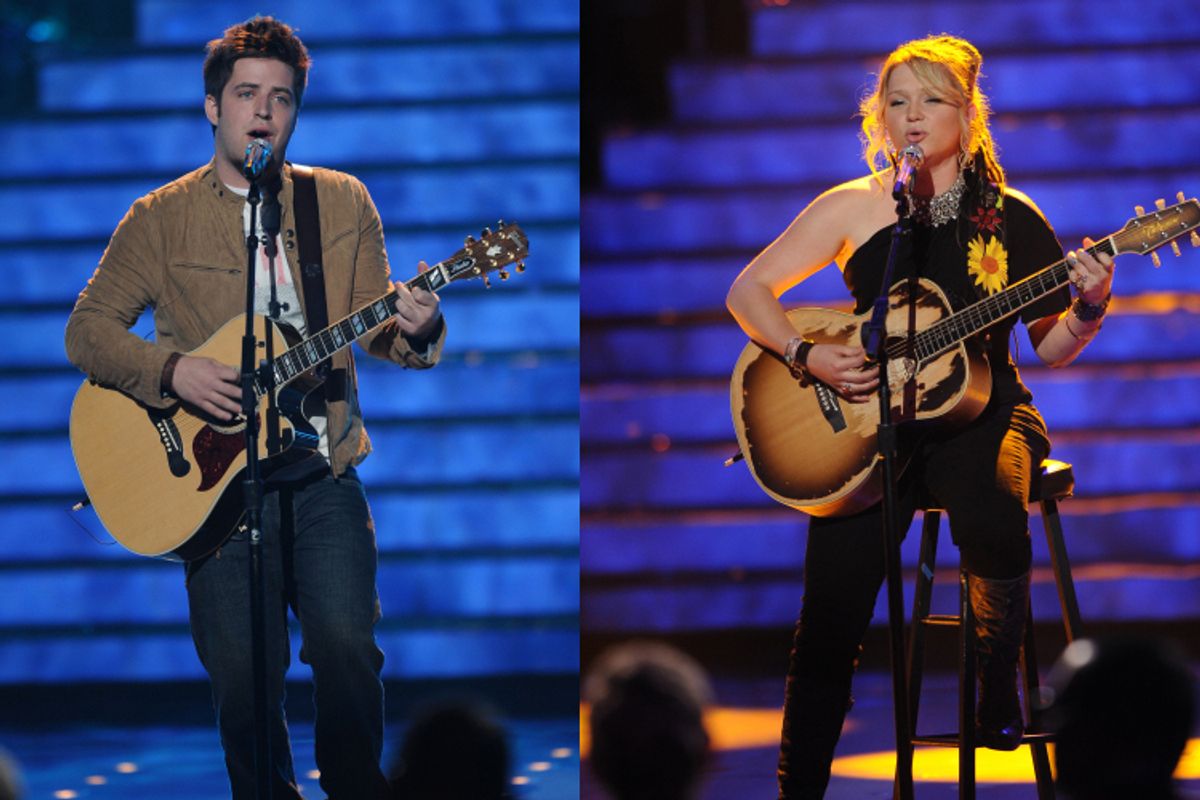 "American Idol, Season 9" is almost over. After Tuesday night’s final performances of the last two contestants, Crystal Bowersox and Lee Dewyze, I could almost hear a collective sigh of relief from coast to coast. The race that felt more like a marathon was almost at an end.

However, moving to the Nokia Theater in Los Angeles gave Tuesday night’s show a special feel. Instead of performing for five hundred people, Lee and Crystal sang to 7000 people. What a difference a few thousand people make.

Lee and Crystal each sang three songs which meant the hour long show went at breakneck speed … it was "American Idol" on steroids.

The first song was chosen by the contestants, a song they had previously sung. Simon Fuller, the creator of the "Idol" franchise, chose the second song. The third song was the debut song the winner of "American Idol" will sing on Wednesday night’s finale show and will be their first single released.

Lee sang "The Boxer" and when he was done, he had made himself vulnerable for a knock out. He was just OK. Pitchy at spots, Lee actually looked relaxed, maybe too relaxed. Those sleepy eyes of his had me wondering if he was dozing off or trying to make some attempt at looking sexy to make up for the mediocre nature of his rendition of the song.

Randy: "Yo yo. Listen. That was not an energetic kind of thing. Pick it up. Pick up more energy." Hey, a six-pack of Red Bull wasn’t going to help Lee.

Ellen: "I couldn’t be prouder if I had birthed you myself." I wouldn’t have been surprised if Ellen had tried to nurse Lee on the spot.

Kara: "Punch harder." I would have been happy with a punch.

Simon: "I’ve got to be honest with you. This is the big one. I would expect a lot more passion, excitement. That was a kiss on the cheek and not a kiss on the lips." Lee needed Viagra and he needed it quick.

Crystal sang "Me and Bobby McGee" and Crystal didn’t let the size of the audience or Lee bother her one bit. Her voice was sweet and clear, she got the audience pumped up and hit all the high notes.

Ellen: "You and your guitar filled up this entire room. Stunning." This was true.

Kara: "You have fire in your belly tonight." Kara had too much mousse in her hair.

Simon: "This brought me back to the time we absolutely fell in love with you. That was terrific.” This was Simon’s second to last show and he was feeling nostalgic.

After Round 1, it was no contest. In fact, it felt like two different competitions. Lee represented Amateur hour and Crystal represented actual talent.

For Lee, Simon Fuller chose "Everybody Hurts" by R.E.M. Lee had a great opportunity here because Fuller had chosen a song that tugs at people’s hearts. Lee looked either terribly earnest when he sang the song or extremely constipated. The background singers and the musical arrangement drowned him out which may have been a blessing. Lee tried to sing with emotion but all I could see were his puppy dog eyes searching the audience for some kind of sympathy. Lee froze.

Randy: "Better, I could feel your passion. It was pitchy in the intro." Passion? Really?

Ellen: "I felt that you went off a couple of times, but I don’t care." Apathy seems to be the emotion of this season.

Kara: "What makes you great as a performer is that you are emotionally available. It wasn’t a perfect vocal but I love that about you." Okay, now I was laughing. If that’s what criteria Kara uses, she should have promoted Tim Urban a hell of a lot more.

Simon: "You went a little bit off melody at parts. What I’m feeling form you tonight is that you’re nervous. For your next performance, I want a 10 out of 10 because you’re capable of it." Simon was persisting in his irrational promotion of Lee, for what reason I have no idea.

Fuller chose "Black Velvet," a groaner of a song but Crystal figured out a way to make it her own. She started at the top of the stairs and initially seemed preoccupied with making it down those stairs in high heels in one piece. Once safely on the stage, she made the best out of that song and showed us all her great vocal range and talent.

Randy: "Yo yo mamasox. This is what I’m talking about. Mammasox is in it to win it. That was hot!" Randy was making some sense.

Ellen: "The wardrobe changes, it’s like a Cher concert in here." Relevant.

Kara: "Crystal, tonight is the night to give it your all. To kill yourself on that stage, that’s what you were doing." With those heels, Crystal was lucky she didn’t.

Simon: "I have a little bit of a problem; I’m almost allergic to that song; a song where people have absolutely murdered it. You took that song and you absolutely nailed it." True, true but such violent language on Simon's part.

Lee’s final song was "Beautiful Day" by U2. This was Lee’s final chance to, remember what Simon said, make it a 10 out of a 10. This song was custom made to inspire and provoke celebration. Lee sang it like an obligation, a resignation. He looked like a little boy with his red sneakers on pretending to be a rock star.

Ellen: "I’m so proud of you. Great job." Mothers can be so blind.

Simon: "Lee, I think you made the most of it. Look, this is my final time I’m going to judge this show." (Let’s just hope Simon doesn’t turn out to be the Brett Favre of judges.) "This is what the competition is designed for, someone who needs a break. You worked at a paint store and remained a very nice person throughout. I wish the best for you." I swear Simon has brought up that paint store job a dozen times over the past several weeks. Why is working at a paint store such a compelling story? Given this economy, Lee’s lucky to be working anywhere.

Crystal sang "Up To the Mountain" by Patty Griffin. I wasn’t familiar with the song but it didn’t matter. This song was simple and didn’t have any bells or whistles. Crystal didn’t need any. Her voice was beautiful, clear, and she sang with passion and emotion. Crystal, unlike Lee, really took it up a notch on Tuesday night, leaving Lee and his pitchy notes far behind.

Randy: "An amazing song by an amazing singer." No bells and whistles to that.

Ellen: "There’s no one else to compare you to. If you make a salad, I’ll eat it." Ellen was living in her own special little world.

Kara: "You really blossomed with that song." No, Crystal blossomed at about age 13.

Simon: "Crystal, since it’s becoming a bit of a love fest, that was by far the best performance and song of the night." Brilliant.

As far as competitions go, this was a shut out, a slam dunk, 3 strikes and you’re out. Crystal was the clear winner, but this means nothing.

After the show aired, polls showed Crystal and Lee neck and neck, with some polls showing Lee ahead. While it may be Crystal clear to me who should be the winner of “American Idol Season 9”, I’m not naïve enough to believe that the best man, or in this case woman, will end up on top.

But I will be at the Nokia Theater Wednesday night, live and in person, to witness and report on the results and announcement of the newest "American Idol".

Look for me in the audience. I’ll be the one with the sign that says, "I survived Season 9 of 'American Idol'."