"Dancing with the Stars" finale: Who won?

It was down to Evan, Nicole and Erin -- and last night, the show finally chose its champion 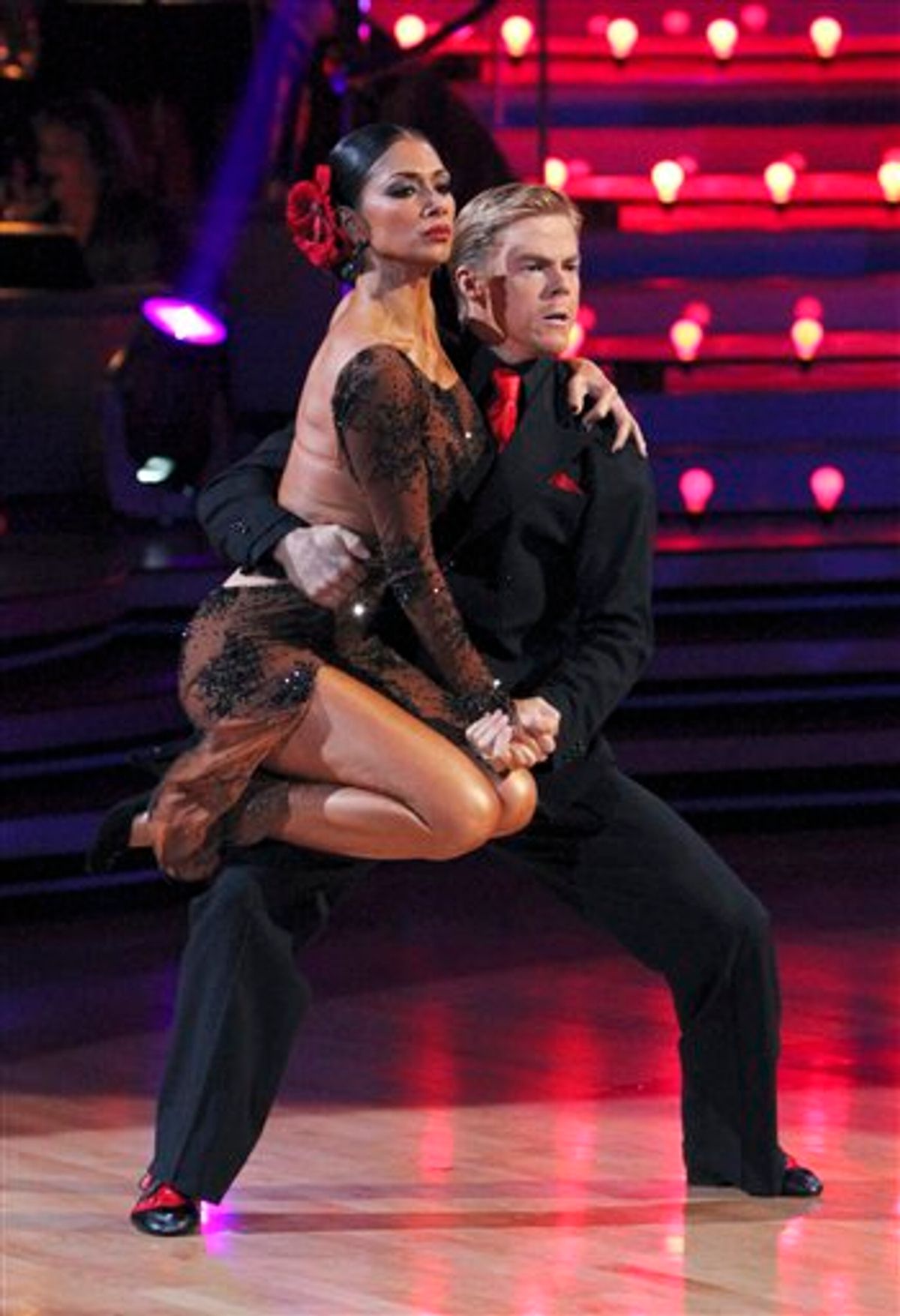 In this publicity image released by ABC, Nicole Scherzinger, left, and her partner Derek Hough perform on the dance competition series "Dancing With the Stars," Monday, May 17, 2010 in New York. (AP Photo/ABC, Adam Larkey) (AP)
--

Before we reveal our 2010 Dancing with the Stars Champion, let’s take a walk down memory lane and celebrate our fallen stars – a ragtag crew of scrappy survivors – and the most colorful, if not always the most admirable, cast of DWTS characters to date. They each returned to the show for one last dance.

Shannen Doherty -- Beverly Hills 90210 alum and notorious bad girl who danced with the grace of an oompa loompah and stole the hearts of tens to fifteens of people.

Aiden Turner -- Sexy Irish soap star with a chiseled jaw, electo-shocked hair and bumpy abs who couldn’t overcome generations of British-ishness and twisted knickers to ever emerge as a contender

Kate Gosselin -- Karmically challenged reality-show personality who redefined motherhood with her devil-may-care moxie and the marketing savvy to spawn the right amount of children to rhyme with her first name.

Jake Pavelka -- Happy-go-lucky bachelor, facial contortionist, bachelorette bjorn and all-American boy next door who was always one missed dance step away from snapping like a Stepford wife and taking down dance partner Chelsie

Pamela Anderson -- Coquettish bad-boy sperm receptacle with clitoral nerve-endings on every square inch of her body who ultimately won us over with her good nature and down-to-earth charm.

Niecy Nash -- Comedian and jiggly fan favorite who was the only contestant who understood that her primary job was to entertain an audience, not further her career.

Chad Ochocinco -- The flirty football star who woo-ed dance partner Cheryl with diamonds and little boy tantrums only to ultimately strap on a pair, get serious and for a short period of time become one to watch.

And then there were three.

When last we left them, Erin and Nicole sat atop the leader board in a two-way tie -- a curious outcome when the differences between the two are staggering. But these shows are never about who is best, but who gets better week after week -- and ultimately who gets the most audience votes. It’s hard to root for Nicole. She’s the one who seems to have it all even as we forget that she didn’t get placed at the top of the heap but rather worked hard to get there. Erin’s easier to like, because even though she doesn’t look like us, her internal monologue sounds like us. She’s never good enough -- and never will be no matter how hard she works. And sometimes she just wants to throw in the towel and give up. So we pull for her, knowing that if she can do it then maybe we can too.

And then there’s Evan. We don’t really know what to make of him, do we? Most of his life seems to be lived on the inside, and while that makes it difficult to relate to him it also makes us curious to know more. America loves nothing more than a big reveal -- and Evan is the only contestant left who just may offer us one.

For the final stage of the competition, the three remaining couples picked their favorite dance of the competition and performed it again for the judges. Instead of scoring each couple independently, the top couple gets 30 points, the second best couple gets 28 points and the remaining couple 26 points. From there, the bottom vote getter from the combined two-night scores is eliminated and the final two are left with one last dance.

Nicole and Derek chose their Argentine tango. In the short period of time that Nicole has been on the show, it has become increasingly more difficult for a viewer who didn’t know any better to tell whether she or Derek was the professional. The dance was flawless -- passionate, intense and in a league above. It’s now become a race for second place.

Evan and Anna also chose their Argentine tango. The first time they performed this dance, they secured their first perfect scores. And even though this time was just as good, it lacked the complexity and intricacy of Nicole and Derek’s. Erin and Maks are going to have to do something they’ve never done before to have any prayer of staying.

For the last time this season, we were once again regaled by the behind-the-scenes bickering of the fiery Russian and his blonde princess -- an indication of just how much pressure they are under to scale an increasingly insurmountable obstacle. They also chose the Argentine tango and did a commendable job but not enough to surpass the other two.

And the first couple eliminated:

As it should be. Erin was never the most talented dancer, but her emotional accessibility made her a fan favorite. Her story reminds us that horrible things that happen to you don’t define who you are -- and that sometimes all it takes is a top-rated network dancing competition to get your smile back. Well done, Erin –--you’ve finally made me a fan, too.

Oh, for the love of God - Kate Gosselin’s back. And she’s dancing again. I promised myself that there was nothing in the world that she could do to make me write about her again, and I was doing just fine until Tony ripped off her dress and placed her on the crane lift for the finale of her "I Will Survive" number. Because it’s there that she stared us down -- all of us. She opened her arms wide, smiled a big toothy grin, gazed right into the camera and gave us a collective "fuck you" look to let us know she’s here for the long haul -- and we can kiss her octo-mommed ass if we don’t like it. Hold me, Tom Bergeron -- and make it all go away.

Thank the Lord for Niecy and Pamela -- my two favorite contestants of the season danced a cleansing sorbet of sex and fun needed to put the horror behind us.

And then there were 2.

For the last dance of the season, Derek and Nicole chose a Jive performed to Tina Turner’s "Proud Mary." They exploded onto the screen, leaving everything on the floor. Nothing left to say. Pure perfection.

I’ve grown to admire Evan over the weeks. He knew from the beginning that this competition was Nicole’s to lose, but he was the only one who has even come close to challenging her. And challenged her he has. The fact that he was never going to let second best be good enough meant that she had to work for every single step. And although their final quickstep was great, it just wasn’t in the same league as Nicole.

And The 2010 Winner of "Dancing with the Stars" IS: Nicole Scherzinger!