Not a confidence-builder: iPhone-assembling Foxconn workers are asked to promise they won't kill themselves 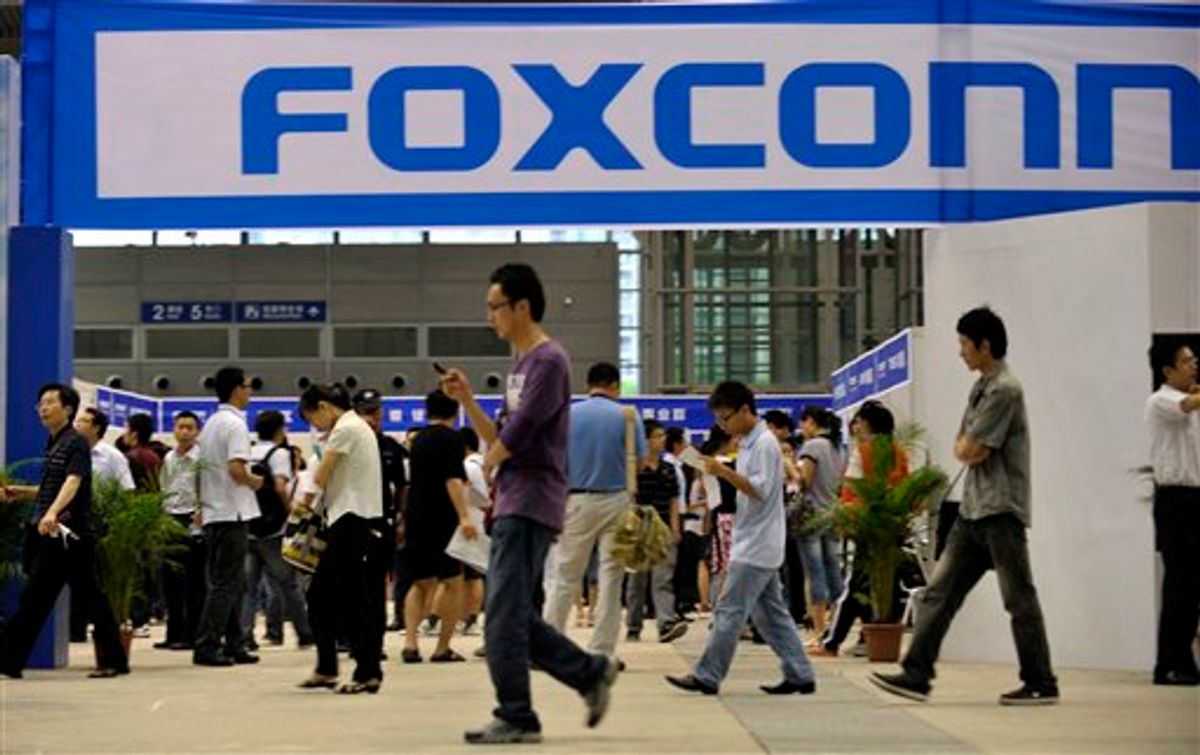 After a string of self-inflicted deaths at iPhone- and iPad-manufacturing Foxconn factories in China, employees are being asked to sign no-suicide pledges, according to a Taiwanese cable news report passed on by Australia's Sydney Morning Herald. The company is also surrounding its buildings with nets to catch jumpers.

I don't know about you, but if I was working 12 hours a day, six days a week, plugging circuit boards into Apple gadgets that sell for more than I might make in a month, and I looked out the window and saw nets being installed to keep co-workers from dashing their brains out on the streets below, I'd start to feel a little depressed. Top that off with an explicit corporate request to refrain from suicide and I'd be seriously questioning my career path.

And yet, according to a Foxconn spokesperson quoted by the Sydney Morning Herald, 8,000  job applicants apply to work at Foxconn's Chinese factories every day. I don't what's more distressing -- the rate of suicides among workers assembling the West's most prized objects of techno-fetishistic desire, or the fact that by Chinese standards, a Foxconn job is considered relatively desirable.

Foxconn's CEO, Terry Gou, has hustled from Taiwan to China to do some damage control and the Wall Street Journal reports that Apple is conducting its own investigation. As well it should: Apple's got a valuable brand to protect, and, even if the company just passed Microsoft in terms of market capitalization, Steve Jobs knows as well as anyone how easily reputations can be made and broken in an age where image is everything. Accusations of low wages can be brushed off without much effort. Nine deaths in six months? Not so easy.

But there are also larger issues to consider. It's fun to pick on Apple, because of the cognitive disjunction between its appropriation of hipster cool and the ongoing exploitation of cheap labor offshore. But Foxconn, and China, assemble gizmos for everyone -- there are very few Americans, hipster or not, who aren't complicit in the miserable working conditions commonplace in developing nations, via their own consumption habits.

But there's an even larger question: What the hell is going on in China? Recent months have also seen a rash of horrific incidents in which deranged men have run amok in public schools, killing or wounding large numbers of children. The school killings have spawned a wide-ranging discussion as to potential causes -- the lack of an adequate safety net for the mentally ill, the massive transitions China has undergone over the last three decades of pell-mell economic growth, and the emergence of significant income inequality.

I won't pretend to have my own definitive answer to this question, other than to suggest that change is inherently destabilizing, and few societies have changed as much as China's in recent decades. But I don't think it would be off-base to throw the Foxconn suicides into the same murky cauldron as the school slayings. The scale on which Foxconn -- with 800,000 employees -- and China are participating in raw and bloody capitalism is unprecedented. It's not all that surprising that the collateral damage is pretty bad, too.