The battle for gay marriage -- in the classroom 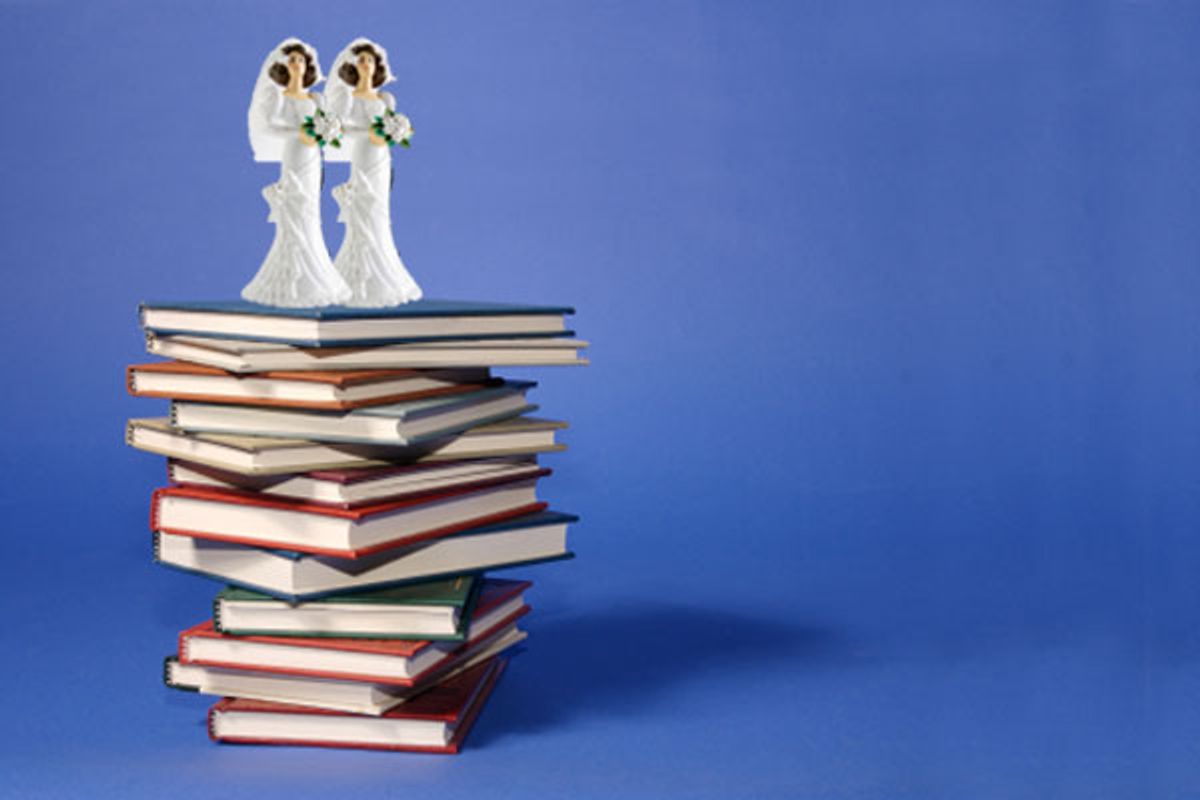 Many people regard marriage rights for same-sex couples as the civil rights issue of this generation. Indeed, you'd be hard-pressed to find anyone who doesn't have strong feelings one way or the other on this issue: Should courts recognize the marriage rights of lesbian and gay couples as a matter of dignity and equality, or should we respect opposition to same-sex matrimony based in religion and traditional morality?

This issue has taken a new turn in recent weeks as Seton Hall University political science professor King Mott was notified that the class he was planning to teach in the fall, titled "Gay Marriage," might be canceled by the university's governing board when it meets on June 4. Newark Archbishop John J. Myers said the course conflicts with the teachings of the Catholic Church (Seton Hall is a Catholic university). "This proposed course seeks to promote as legitimate a train of thought that is contrary to what the Church teaches," Archbishop Myers said in a statement. "As a result, the course is not in synch with Catholic teaching."

We have taken a special interest in professor Mott's class because we too are scheduled to teach a new class titled "Gay Marriage" this fall at Columbia University, through the Institute for Research on Women and Gender. The flier we put together to advertise the class poses two views of the marriage issue: One image captures gay rights demonstrators protesting laws that preclude them from marrying, while the other image, from the group Dyke Action Machine, asks: "Why Be Boring for a Blender? You Might as Well Be Straight."

Unlike professor Mott, we have little worry that officials from our university will step in and cancel our class for ideological or moral reasons. But that doesn't mean that we are immune from ideological criticism of the material we will cover in our course. Oddly enough, that criticism may come from the LGBT community itself.

The Catholic Church has an official line on same-sex marriage -- totally against it -- and by and large the official gay community has one too -- totally for it. But there are more than a few people within the lesbian and gay community who have questioned the wisdom of the political and legal strategies pursued by the leading gay rights organizations to make marriage the most important issue of the day. Why would a movement founded by sex radicals, transvestites and lesbian-feminists set their sights on assimilation to and inclusion in such an outmoded, sexist and heterosexist institution? (This is where the blender critique comes in.) The respectability that marriage would confer on same-sex couples is exactly what they don’t want. Not surprisingly, the movement's lawyers who have elevated same-sex marriage to issue No. 1 have not taken kindly to this criticism.

This kind of intra-community debate is not new. Recall that when the NAACP and other civil rights organizations made racial integration their top priority in the 1950s, some parts of the black community objected. The dissenters felt that it was more important to push for greater resources for the black community than to fight for black children to win the right to sit next to white children in school. That was a difficult and principled disagreement between factions within a community, and we’re having a similar one now in the gay community about marriage.

It's the richness of this debate that renders it such a likely and important subject of academic study, not the fact that the professors teaching the course have a particular political agenda they want to advance with their students. Marriage has a rich and complex history in the United States, one that is tied up in evolving notions of equality, liberty, dignity and citizenship, as well as family, respectability, love and what it means to be an adult. What's more, almost all recent welfare reform initiatives have included funding for programs that would encourage poor people to marry and teach them how to stay married. Underlying these initiatives isn’t romance and warm and fuzzy feelings about the family, but the state's interest in privatizing the costs of paying for poor children.

Treating gay marriage as a "thumbs up" or "thumbs down" issue both fails to grasp the complexity of this particular political issue and deprives students of the opportunity to think critically about how the world is changing and why it should. In the end, some or many Seton Hall students might come to agree with official church doctrine on marriage for same-sex couples, but doing so as a matter of orthodoxy rather than critical reflection defies the whole idea of what it means to receive a higher education.

Katherine Franke is a professor of law and director of the Center for Gender & Sexuality Law at Columbia Law School; Katherine Biers is an assistant professor in Columbia's English and Comparative Literature department.