"Video Slut": The mother of the '80s music video

Sharon Oreck is the woman behind some of the era's most iconic images -- and, boy, does she have stories to tell 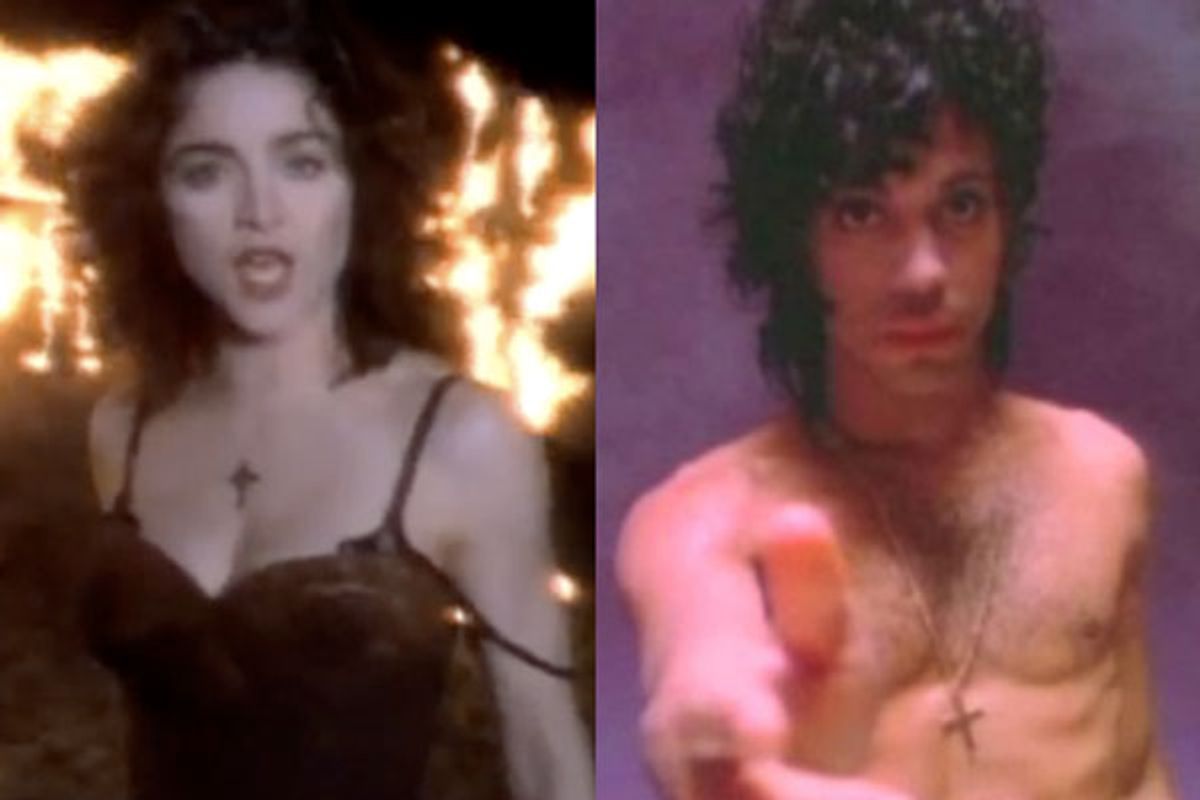 Scenes from Madonna's "Just Like a Prayer", and Prince's "When Doves Cry" videos.
--

Over the past few decades, Sharon Oreck has played mom to a sizable contingent of '80s music royalty. When a passel of cops showed up on the set of Madonna's "Just Like a Prayer" video, thinking the 20 petroleum-soaked flaming crosses made out of asbestos were part of a hate crime, she was the one who had to convince them otherwise. When the local pet trainers ran out of white doves before the shoot of Prince protégée Sheila E's "Glamorous Life" video, she used gray homing pigeons shellacked with a white substance used by mature men to cover their bald spots. And when Michael Jackson was offended by an alleged offer of oral pleasure from Naomi Campbell on the set of the aptly named "In the Closet" video, it was Oreck who had to soothe egos all around.

Oreck's new memoir, "Video Slut," tells the story of how she went from being an unwed mother, cut off by her middle-class family, to a hotshot video producer in the golden age of MTV. (Subtitle: "How I Shoved Madonna off an Olympic High Dive, Got Prince in a Pair of Tiny Woolen Underpants, Ran Away From Michael Jackson's Father and Got a Waterfall to Flow Backward so I Could Bring Rock Videos to the Masses.") Over the next two decades, she went on to produce more than 800 videos, including some of the most iconic of all time: Prince's "When Doves Cry" (working with Prince, she writes, was "a drag, a bore, and a disappointment"), Suzanne Vega's "Luka" (they wanted something "kinda up" about child abuse, and the team delivered) and Janet Jackson's "Nasty" (in which patrons at a nearby transvestite bar, enraged by not receiving a sufficient fee for being extras, decided to take off their panties and cancan through the official dance sequences, thus freaking out the cops, who subsequently called a SWAT team, starting a near riot).

Salon spoke to Oreck about Madonna's pain tolerance, what she loves about "Glee," and the sad decline of the music video.

Looking back, the '80s seem like a golden age of music video. Did that seem true at the time?

People keep telling me over and over that their childhoods were really affected by music videos. I was at a club in Argentina with 25-year-olds and they were all like, "You did Sheila E 'Glamorous Life'! Oh!" We did not have any idea that it was perma-fodder. We just thought, "Oh, it's like newspaper work. You write it, and then the next day, you write something else." But because of the Internet, it will live forever. I think that people look back at it and think of it as a golden age. And the reason for that is it was a free time. You could do anything. Nobody was micro-managing it; no one was paying any attention to it. No one was managing what was being seen; it was not p.c., it was not corporate-approved; it was just what people really wanted to do. MTV is over now, in terms of music programming. That's why it was a golden age; because there is no more music programming. There is no age at all.

Your first work as a producer was on Sheila E's "The Glamorous Life" when you were 29 years old. Was it typical at the time to have a young woman working as a producer?

In the music video world, there was no standard at all. Nothing was typical because there was no industry until 1982. When I entered it, it was still pretty much the Wild West. When I went in and declared that I made 10 percent of the budget, that is not the industry standard, believe me. I would never pay anyone that much money. But I just didn't know you couldn't ask for that. So they gave it to me.

Did that Wild West atmosphere allow MTV to be more free in the kind of music it promoted?

When I started working in the music industry, the only thing going was radio and radio stations were very segregated in terms of whether they played white or black music. You either had urban music or you had pop music or you had rock music. When MTV began, it was designated as a rock-pop venue and there was an unofficial policy not to play urban music -- to the point that when I was working with Sheila E., when we cast her boyfriend, the guy that's supposed to get with her in the car, we cast a black guy, and they told us we couldn't use him. We had to use a white guy. And I was like, "But she's ... black."

Everyone will deny it came from them, but they wouldn't put it on MTV. They would say it wasn't "crossover." Then all of the sudden, kids started to say, We want to see rap music. The gradual takeover of rap music on MTV changed the way America saw music. I believe it changed the way that you integrated the youth of America. That's the first time you really saw mass idol worship of black artists combined with black athletes. I do think it had an impact.

You began as an unwed mother who had a child at 16 in 1972. What was your parents' reaction to your decision to keep your child?

I don't think I put this in the book, but my parents actually hired a therapist and she sat down with me and said, "I want to help you with this. I've come up with two lists. One of those lists is why you should keep your child and this other list is why you should give your child up for adoption. I think we should examine each of these lists and make a really good decision." So she hands me the "why you should adopt your kid out" list and it's got like a hundred items on it. But the first one is: "Your son will be gay." No, no, it's the '70s: "Your son will be a homosexual."

Are you kidding me?

This is a licensed psychologist! No. 1: Gay. She was hired by my parents to give me a list of horrifying scenarios that would definitively occur, without question. They were proven by science! The list also included: He'll hate you, you'll never get a husband -- that was No. 3. Not one thing on her list came true.

But I knew for months I wasn't going to do it. I just couldn't say it out loud. I didn't tell anyone. And then I was in that hospital, and I just said, "I'm not going to go home without him." And then they said, "Well, then you can't come home."

You describe O Pictures, your music video production company, as "bucolic feminist utopia," run by a bunch of ladies and gays. All of your stories mostly involve you, the producer, and Mary Lambert, your director, bossing these big industry guys around, getting in fights with Joe Jackson, all of that.

My company was really famous for being run either by these fantastic, beautiful girls, or a bunch of big dykes, depending on whether you liked us, were jealous of us, or hated us. That was pretty much how it went down. My peer group -- well, now they all act like they love me and they always respected me -- but in my field, there were probably five companies of merit in the '80s and '90s, and lots that came after. But the big one was Propaganda. We perceived them as the USSR and we were Poland. They were super-big and they brought Polygram in really early for tons of money and they ended up making movies and they kind of folded it into this entertainment magnet. We were more the arty, boutique company.

Were they the ones who staged a fake riot for U2's "Where the Streets Have No Name" video?

Yes they were. Fuckers.

I've seen VH-1 specials on the making of the U2 video, and everyone is like, "Here come the cops! They're shutting us down!"

"And we had no idea!" They totally planned that. It was a pre-planned riot.

Even though you often seemed grossed out by some of the '80s excess, you write that "Madonna made narcissism look hot." I get the feeling reading this that she is one of the few characters you unabashedly adored.

Oh, beyond. I absolutely love her. I hate the term "empower," because it's so wrongly appropriated by, for example, strippers, but she really did empower me, because she just took power so unapologetically, in my presence, just over and over and over. I had a lot of strength in that world, but she was so powerful. I've never before or since seen anyone like that.

She stabs herself on a cactus and keeps dancing. She jumps from an Olympic high-dive herself, rather than using a stunt double. That sounds like the exact opposite of pop-princessy behavior.

She didn't even flinch, with this giant cactus stuck in her foot. She has the worker ethic. Everything she did with her life, she took everything that could have gone wrong and made it a positive thing. She had an almost scary religious background and she turned it into something positive. She took all the Catholic guilt and turned it into this incredibly rigorous pro-sex liturgy; she turned it into her own religion.

Where do you see that energy now?

I think that musicals are coming back. Watching the success of "Glee" warms the cockles of my heart. It's fascinating for me to see how so many people are able to turn all of that work that we did over the years to create iconography into so much positive energy. That makes me feel really good about the '80s -- because most of it wasn't very well thought out. What really amazes me about that show is how they pull it off. It's at least 30 minutes of really complicated musical moves. I know from experience how long it takes to a do a dance sequence. It takes at least two days. And they have seven days. I don't know how they do it.