Wall Street turns on Obama for administering its medicine

The president has tough love for the banks -- but it's still love, not hate 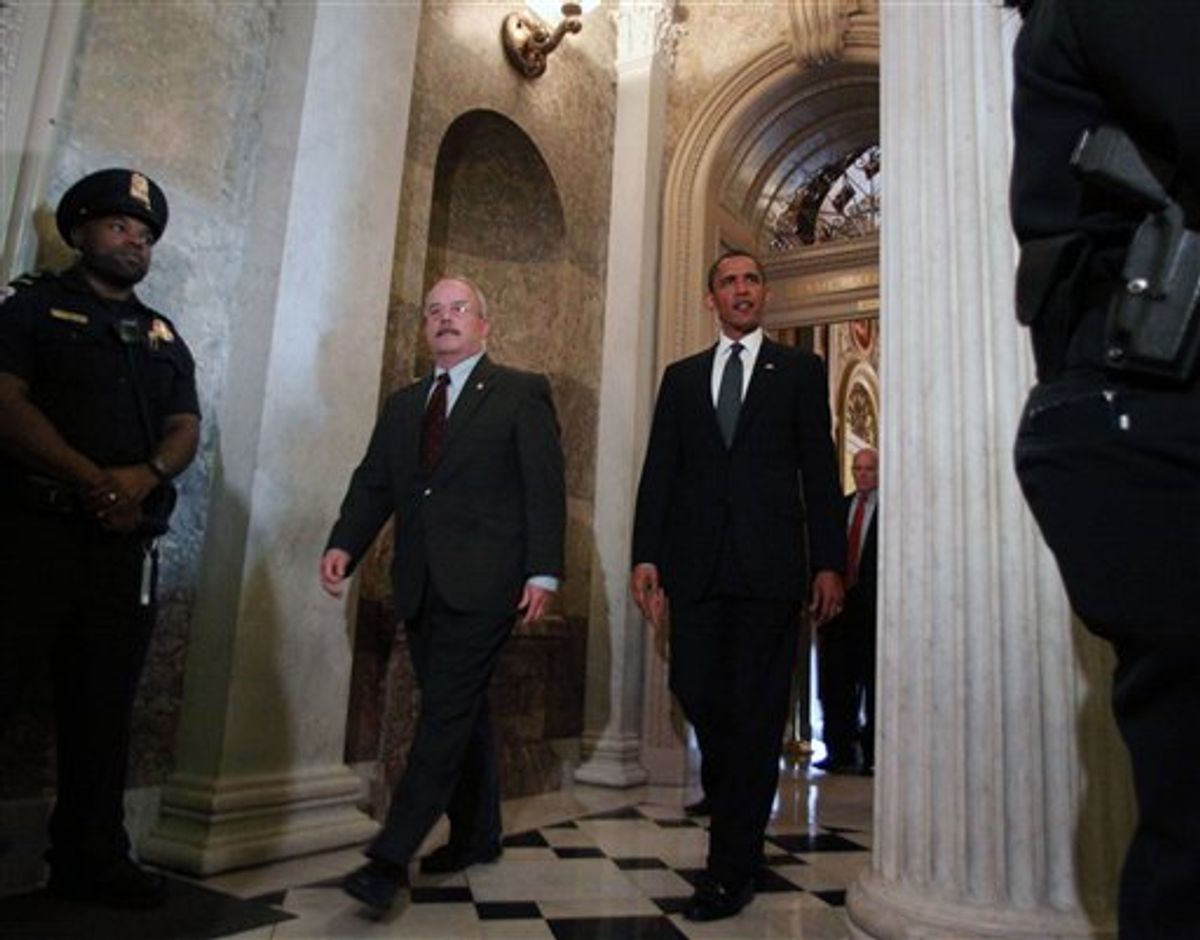 It's hardly a novel observation that President Obama has a tendency to find positions that displease those to his right and to his left. Indeed, he seems to thrive in that situation so much that it seems as much like a personal trait as a political calculation. What does he get out of this, though? What's the point?

There's a classic example in a major feature run in this week’s issue of New York, about the way dysfunction has crept into the relationship between Obama and Wall Street (which is, apparently, a bad thing). The key sentence was one uttered by the president at a meeting with the barons of the big banks. Despite the call for what Treasury Secretary Tim Geithner refers to as "Old Testament Justice," Obama wanted the bankers to understand the importance of his presidency to their survival. "My administration is the only thing between you and the pitchforks."

Indeed, I would take this a step further. Obama has managed, almost perfectly, to thread this needle, and it’s unlikely any other administration would have been able to. If John McCain were elected, for example, he would have found himself more vulnerable on his left than Obama has been, for obvious reasons. It’s not hard to imagine him launching a clumsy populist attack on the banks when it became convenient, without any of the broader, more sophisticated interest that the current administration has in reducing inequality or encouraging financial stability.

So it's clear that Obama has been giving tough medicine to the banks. But it's also clear that it's medicine, not poison. Watching the masters of the universe turn on the president after he saved their asses, it's hard to avoid the conclusion that these guys -- Lloyd Blankfein, Jamie Dimon, and the rest -- are a bunch of punks. They've always needed the government to rein in their worst impulses. Without someone around to force it on all of them at once, no single company would go out on a limb and voluntarily incur the competitive disadvantage of some necessary restraint. And this isn't even mentioning the enormous subsidy available to these banks, in the form of implicit government underwriting of their debt.

It's revealing, then, that for all the whining of the bankers, there appears to be a general consensus even around Wall Street that the new financial reform package is letting them off easy. But we shouldn't be surprised by this. Obama has no interest in punishing them. As in healthcare reform, his concern is with stabilizing the system we have, not reinventing it root-and-branch.

As if this weren't already clear enough, the New York Times reports that he just made the same point yesterday, discussing an entirely unrelated area. At a fundraiser in San Francisco for Sen. Barbara Boxer, Obama told donors about his recent meeting with Republican senators. Because the GOP has proven so unwilling to compromise with him, the president explained, he's repeatedly proceeded by conceding a lot of what the opposition wants at the outset. (Shocking, no?)

On immigration, for example, he described his offer to Republicans: "You’ve got to meet me on solving the problem long-term. It’s not enough just to talk about the National Guard down at the border. You don’t even have to meet me halfway. I'll bring most Democrats on these issues. I’m just looking for 8 or 10 of you."

That's a fair description of Obama’s entire time in office. Here's the Times again, on how the president explained himself to liberals at the fundraiser:

Mr. Obama said that in his time in office he had made decisions unpopular with his progressive base, and he urged Republicans to do the same.

Mr. Obama's point about disappointing some in his liberal base had been illustrated moments earlier when a man yelled out, "Move faster on 'don't ask, don't tell'" -- a protest of the president's delay in keeping his promise to get Congress to repeal the military policy against openly gay and lesbian service members.

In fact, I'm hard-pressed to think of a single issue where Obama’s course of action has diverged very much from a center-center-left, technocratic consensus of experts. Just yesterday, the Congressional Budget Office released figures showing that the stimulus package had created at least 1.2 million jobs and increased GDP by at least 1.7 percent.

Here, of course, we now know to expect conservatives to come howling about how Obama is a socialist. (Or, in the hilarious nonsense term recently offered by Jonah Goldberg, a "social-ist.") But they've got it exactly, perfectly wrong. From stabilizing the recession to imposing moderate constraints on the financial sector, to trying to find a middle ground on healthcare and immigration, Obama's entire administration is organized to bolster the free market and keep it running smoothly. The basic idea of pissing everybody off on both sides of him is that, with the economy growing, the financial markets stabilized, the healthcare situation improved, and inequality at least slightly under control, he'll have no problem finding a majority in the middle to reelect him.

For those of us who are genuinely on the left, this can be awfully disheartening. But there's at least some vicious pleasure to be found in seeing how incapable right-wing market fundamentalists are of the appropriate gratitude. Blankfein and Dimon, apparently, are now "pretty close" to thinking the president is a socialist. It's a fun -- if deeply perverse -- daydream to think about what would happen if someone like Goldberg or Blankfein had been president this past year. Then these guys might really have learned what socialism means. Without "social-ists" like Obama around, who's going to stand between them and the pitchforks?