Making the food pilgrimage to Paris

For years, I've been a culinary Francophile. I'm finally going to the motherland, and I hope you'll join me 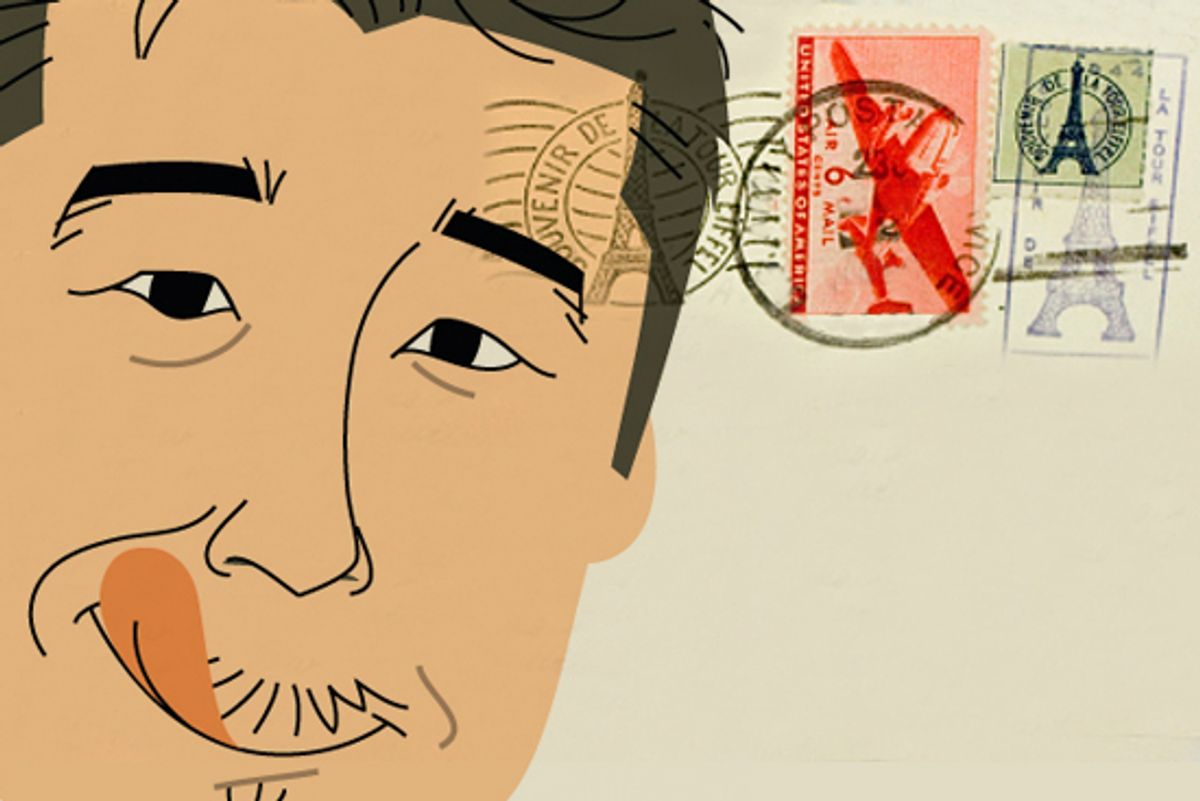 I'm on a plane pointed toward Paris, and I swear I just saw a woman in a flowing bow of a neck scarf, made of the same material as her shirt. Classically chic, she could walk right into my vision of what I've always imagined Paris to be, strolling past gilded statues on a bridge over the Seine, on her way to meet a deliriously beautiful lover to nibble on cheese and, eventually, one another. It was exactly the sort of thing you don't want to see on your way abroad, because the reality of the world rarely matches your fantasies, and it's best to travel with realistic expectations. But I can't help it. I'm flying into a fantasy of France.

"Why are you going?" a woman asked me in the airport.

"To eat baguettes and macarons," I said with a jokey smile. But I meant it. When my friend came back from his honeymoon there -- a friend who inspired me to go to culinary school -- he said that going to Paris was like a pilgrimage. French food may have fallen a little out of fashion in favor of the brasher cuisines of Asia and Latin America, the earthiness of Italian cooking, the creative haute cuisine of Spain, and the amalgam of these things we have in America. But what I'm looking for isn't flash and bang, it's the basics, it's the foundation.

For me, this trip is about benchmarks -- I want to know what a baguette is really supposed to be, a roast chicken, an omelet.

Who flies 3,000 miles because of an omelet? Well, I became a Francophile because of one. In culinary school, a chef gave a lecture on the perfect French omelet, a totemic dish of eggs, butter, and salt. I snored until he made one, and it felt like my life changed a little bit when I took a bite and felt it dissolve and disappear, vanishing into the purest egg flavor I've ever known. I tried for weeks to get it right, and the more I learned, the more I discovered there was to know about the seemingly simple task of wrapping scrambled egg in an envelope of itself. There was the shape of the pan, the size of the pan, the kind of metal the pan is made of. There is the heat, how much of it and for how long. There are your hands, and how they move the eggs in the pan, how they scramble them so you have the silkiest, sexiest eggs imaginable, with the very last drops of liquid egg hitting the bottom of the pan at the same time, so they form the thinnest possible skin for the omelet.

A few years later, I sat with the great French chef Daniel Boulud to talk about omelets for a story. The interview started formally, but when we started talking about how, exactly, to cut the butter so that it melts inside the omelet, I could see him turn from an international restaurant magnate back to a young cook, thrilled to see the whole world before him in the eggs in his pan. I realized then that the fashion and the fads don't matter. Any cuisine that has such depth of respect for something so simple but so elusive as a perfect omelet will always have more to teach me than I can learn.

And so I'm on my way to taste bread and various cooked birds to learn what they are again. You can see where this is a dangerous plan. I mean, how often do you wake up thinking, "You know, today I'm going to have the best roast chicken of my life," and go out and find it that afternoon, in between a beautiful walk and a belly-full nap? I've kind of avoided doing this trip for years, afraid that I wouldn't get to the right places, that I wouldn't have my mind blown at every turn.

But how long can you live in fear of life not being perfect? The woman who talked with me at the airport has a tattoo on the inside of her wrist. It reads, in slender script, "Say yes," a reminder of the importance of doing what you want but are afraid to do. She sees it as often as you might check your watch. I asked her why she was going to Paris. "Because it was time to," she said.

I can't tell you exactly why either, but I'm going because it's time to. I hope you'll forgive me for my silly plan, and I hope you'll enjoy imagining your own pilgrimage through the stories to come.

Check back in over the next week to see what benchmarks I find, and where and what you should eat when you visit.