Anti-Islam racists wish New York could just get rid of all these foreigners, much like Saudi holy cities have 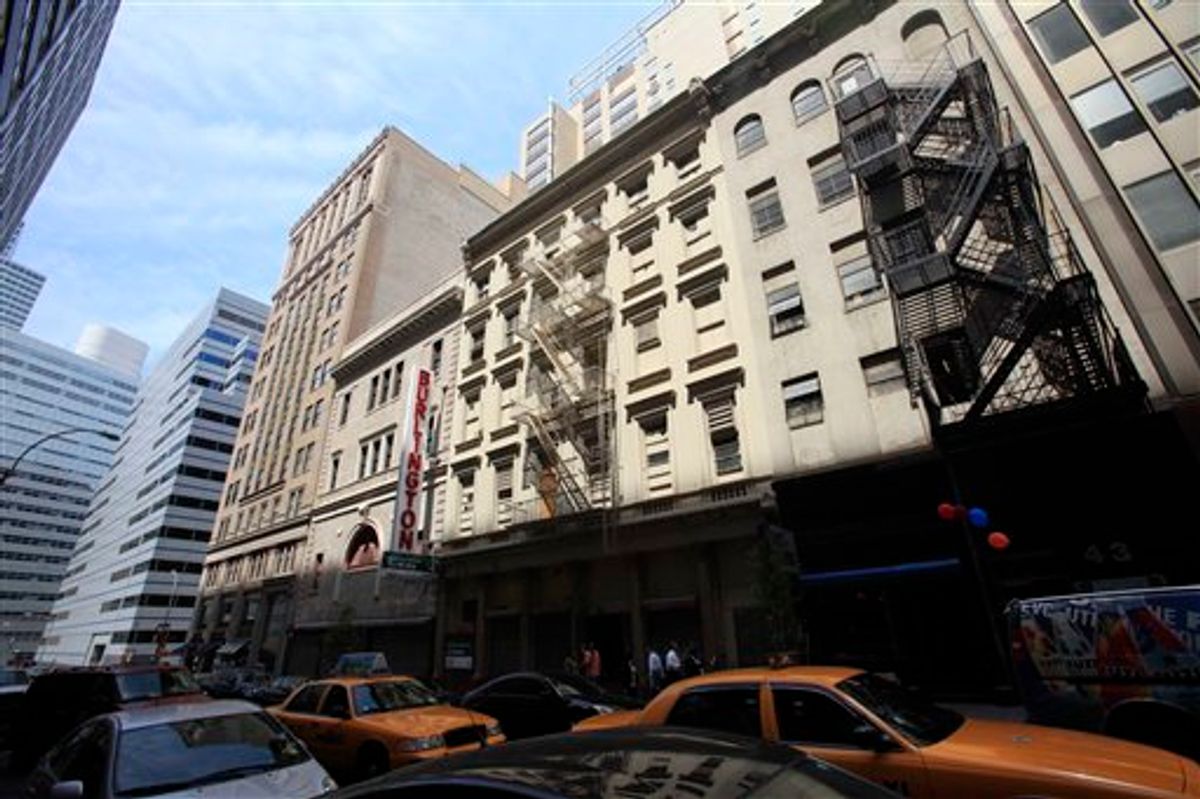 FILE - In this file photo of Thursday, May 6, 2010, traffic passes a building in lower Manhattan that once housed a Burlington Coat Factory store, in New York. A 13-story mosque and Islamic cultural center is planned to replace the building that was damaged by airplane debris on Sept. 11, 2001. Now officials say the mosque will need the approval of the city's Landmarks Preservation Commission. A decades-old proposal to designate the building that would be torn down to make room for the planned mosque as historic must be put to a vote, an official says. Separately, a community board vote is planned Tuesday, May 25, 2010, on whether to support the plan for a mosque and Islamic cultural center. (AP Photo/Mark Lennihan, File) (AP)
--

The way Sarah Palin and the Tea Party populists bash East Coast big city elites, you'd think they might care a little bit less about neighborhood development in lower Manhattan. Maybe I'm old-fashioned that way, but that kind of thing just seems more like an issue for the neighborhood association than for Fox News.

Of course, I'm kidding around. What they care about is treating the place where New Yorkers live, work and worship as a battlefield against a massive, faceless enemy. That enemy, of course, is Islam, writ large.

What's happening: The community board in lower Manhattan has endorsed, by a 29-to-1 vote, a plan to build a mosque and Islamic cultural center about two blocks from the former site of the World Trade Center. Predictably, outrage has erupted. If you type "mosque" into Google, the first suggestion is "mosque at ground zero," which gives a sense of how quickly this has moved into the popular consciousness.

The imam in charge, Feisal Abdul Rauf, is consciously moderate, and has described combating radicalism as his personal mission. Nor is he jumping on the chance to get in the neighborhood to make some point: The mosque is already just a few blocks away, in Tribeca, but has overgrown its current space. Rauf says that he hopes that having a moderate mosque so near ground zero can send a message of tolerance and peace.

But this is something the right wing just can't pass up. These people, and this neighborhood, can't just be people in a neighborhood. They've been conscripted for a larger war.

Mark Williams, a Tea Party leader and Fox News commentator, wrote on his blog, "The monument would consist of a Mosque for the worship of the terrorists' monkey-god." He added, "In the meantime I have a wonderful idea along the same lines as that mosque at Ground Zero thing… a nice, shiny new U.S. Military Base on the smoldering ruins of Mecca. Works for me!"

At WorldNetDaily, the Birther Web publication popular on the conservative fringe, an article, written in classic WND style, begins by acting like a straight report -- albeit laced with purple prose about "that fateful day when time stood still." Then author Chelsea Schilling moves on to ominously noting that building inspectors had trouble investigating construction complaints -- almost as if somebody was hiding something. She finishes up by quoting a random selection of racist blog commenters: "Muslims are doing this only to see if they get away with it. It's the way Islam spreads in every country these days, like a cancer -- through incremental totalitarianism," writes one. Another writes, "This is not different than allowing the Nazis to establish their headquarters and propaganda office in NYC in 1938. How come people could tell right from wrong then and not now?"

Lest you think it’s just anonymous trolls producing this stuff, though, check out Pamela Geller, the head of the group "Stop Islamization of America," talking to Joy Behar on CNN. According to Geller, instead of a mosque, the site should be host to a monument to the "victims of hundreds of millions of years of jihadi wars, land enslavements, cultural annihilations and mass slaughter."

You’d think someone who runs a group with "Islam" right in its name might know that the religion is about 1,400 years old -- not "hundreds of millions." I know that all that desert stuff seems super-ancient -- "sands of time" and and all that -- but honestly. "Hundreds of millions"? That’s way, way older than homo sapiens as a species. (Maybe that explains Williams' "monkey god" reference?)

Then there's Andy McCarthy, National Review writer and recent author of a book arguing that liberals are consciously conspiring to betray America to the ravenous Muslim horde. McCarthy recently pointed out on Fox News that there are 2,300 mosques in America, but no churches or synagogues in Muslim holy cities Mecca and Medina.

First of all, I think this fairly puts to rest any notion that the more militant strain of anti-Islamist hawkishness is anything other than full-scale, civilizational hatred. After this eruption, it's going to be a stretch to take seriously claims that the interest of the right-wing base in armed conflict in the Middle East is about anything but an active desire for full-on race war. (I've taken some heat in the past for using this term, but I stand by it. The occurrence of the phrase "monkey god," I think, makes my point rather neatly.) Moreover, it's penetrated quite far into the mainstream of the right, with the flowering of a sub-literature that treats migration patterns and labor markets in Europe like they’re the secret plan for the conquest of Christendom.

In recent years, liberals have become fond of pointing out that this kind of belligerent overreaction to the terrorist threat is exactly what makes terrorism effective. It plays into the hands of Osama bin Laden to treat Islam like our foe in a global, apocalyptic struggle. That's exactly how he sees it, and joining him in this fantasy endorses al-Qaida's ideology.

This is a true and important point, pragmatically. But there's something even worse going on here. It's not just that Gellar, McCarthy, Williams and the rest in the War-with-Islam group are inadvertently playing into the hands of Islamic extremists. They are, exactly, their analogue within our own society. The same things that benefit Islamic radicals benefit anti-Islamic militants. Both groups feed off conflict, and prosper when violence erupts. Their only break from accusing Islam of guilt in wars and mass violence seems to come when they call for wars and mass violence against Muslims.

It's notable how McCarthy seems to think that, in pointing out that the United States has many mosques, but the holy cities of Saudi Arabia have no churches, he's making an appropriate comparison. It's almost as if he demands that we behave just like a theocratically tinged authoritarian monarchy. The hatred these people have for the Muslim world conceals a noticeable yearning -- an envy for its ability to carry out the undemocratic, anti-pluralist, and puritanical measures that the United States has long since abandoned.