Looking for smart books to entertain your girls when they're home from school? Here's your guide 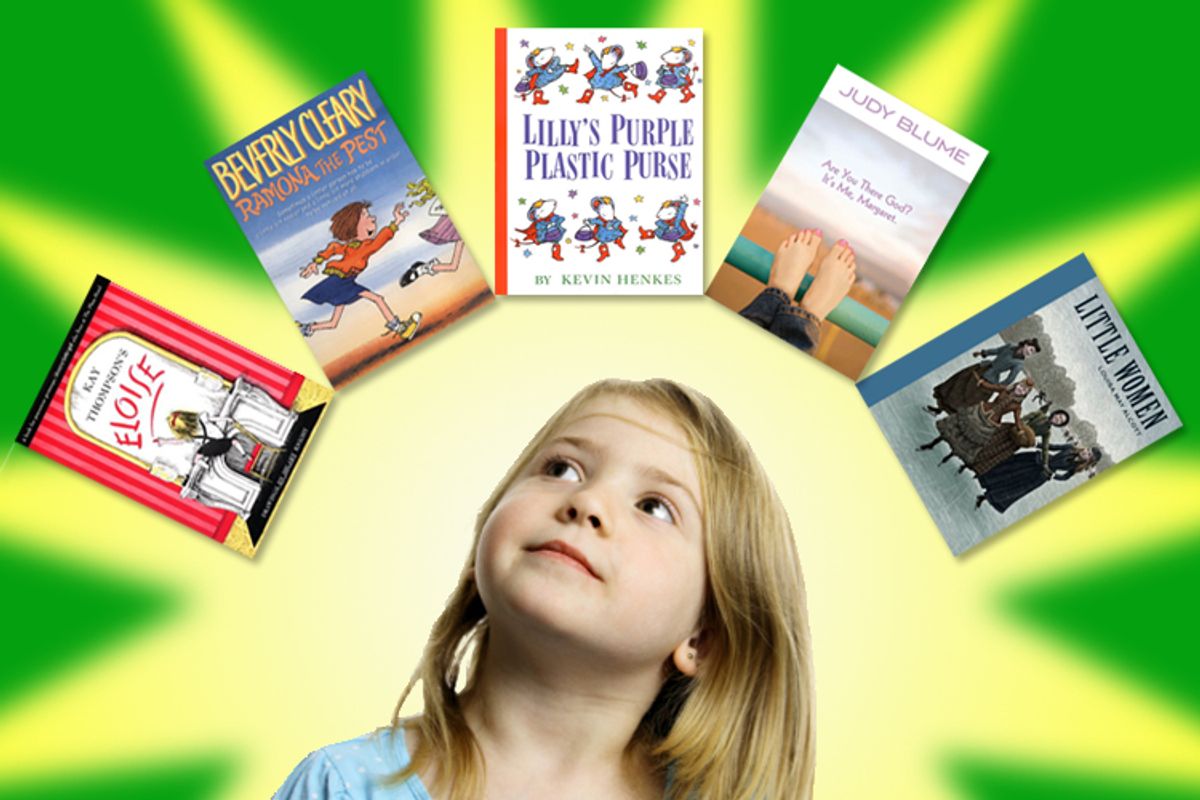 Memorial Day is just around the corner, and school is nearly out. Even if you've planned a full summer of activities for your kids -- camps, trips, days at the beach -- there may come a moment when they look at you, bored and beseeching, wondering how to fill those long, hot days. What then?

Hand them a book. A really good book. To help you out, we've put together two lists of great books for kids, one tailored especially for girls, one curated with boys in mind, though of course all the books on these lists may be enjoyed by kids of either gender. This week we'll start off with especially engaging reads for girls of all ages (the boys list will appear next Thursday):

Plenty of people have other favorites by Henkes -- "Chrysanthemum," "Owen," "Sheila Rae, the Brave," "Chester's Way." But "Lilly's Purple Plastic Purse" stands out for its emotional nuance. Lilly, a young mouse who wears fabulous red cowboy boots, adores her teacher, Mr. Slinger. One day, Lilly brings her new purse to school, and is seriously excited to show it to the class. Asked to wait, she can't quite manage to restrain herself, repeatedly interrupting the class to show off her new treasure. When Mr. Slinger takes the purse away until the end of the school day, Lilly, infuriated, gets revenge by drawing a mean picture of him and slipping it into his bag. Then, on the way home, she finds that Mr. Slinger has written her a sweet note, "Today was a difficult day. Tomorrow will be better." Lilly is filled with sickening regret. But she apologizes and is forgiven and, best of all, manages to forgive herself. Mr. Slinger's words, and Lilly's acceptance of herself -- on good days and bad -- are lessons that any fabulous little girl (or grown woman) who occasionally struggles to control her impulses can take to heart.

"Eloise" by Kay Thompson, Drawings by Hilary Knight (Ages 7 and up)

There's a reason this book about a 6-year-old girl making all manner of mischief in New York's Plaza Hotel, originally published in 1955, is beloved by girls and women everywhere. Actually, there are myriad reasons, Knight's breathtakingly elegant, deliciously expressive illustrations significantly among them. But mostly, it's Eloise herself -- that never-bored, perpetually inventive little girl, who orders everything from room service with a definitive "and charge it please, Thank you very much," torments her tutor, adores her nanny, misses her absent mom (though she'd never say so), braids her pet turtle Skipperdee's ears first thing each morning ("Otherwise he gets cross and develops a rash"), and generally spends her days, well, pretty much as she pleases. She's a far cry from the overscheduled, helicopter-parented children of today.

There are those who would make a strong case that Barbara Park's more recent Junie B. Jones series is the better girl-starring series for this age group. Then there are those who remember devouring Cleary's books by the pile when they themselves were around 7. Those people will point to the books' enduring popularity, and the fact that the adventures (er … misadventures) of the irrepressible Romana can still deeply absorb girls -- and yes, boys, too -- just transitioning to chapter books, and make them laugh and laugh. If Ramona is a pest, she's a pest many children can truly relate to.

Ah, the March sisters -- coltish tomboy Jo; frail, sweet Beth; beautiful, practical Meg; pampered, artistic Amy -- living in genteel poverty with their mother, Marmee, in their New England home and struggling to make the best of things while their father is away, fighting in the Civil War. As wonderfully warm and endearingly romantic as you may remember them to be, the stories that make up the novel are surprisingly insightful, fresh and modern. It's a book worth returning to, if you haven't picked it up since childhood, and a lovely book for girls in the midst of their own.

For many girls and young women, this book pretty much wraps up their preteen years: the angst over their changing bodies (or bodies that aren't changing fast enough), the confusion over fitting in socially and staking a claim to their own beliefs, the deep desire to know right now what life will bring them at its own pace. Blume's protagonist, 11-year-old Margaret, whose family moves to the New Jersey suburbs from New York City when she's on the brink of sixth grade -- that universally difficult year -- contends with all of this, chatting with God in her bed at night though she has been raised in a non-religious home. Grown-ups who read this book years or even decades ago (it was initially released in 1970) can probably conjure images of first bras and first periods. And while they may recall how personal and real the book felt, they may have forgotten how funny it is, too.

Is your favorite book sorely lacking from this list? Let's face it, any list of five great books for girls is, by definition, woefully inadequate. Where, you might ask, looking over this handful of literary selections, is Frances Hodgson Burnett's "The Secret Garden"? Or Roald Dahl's "Matilda"? Or L.M. Mongtomery's "Anne of Green Gables"? Or Astrid Lindren's "Pippi Longstocking"? Or Madeline L'Engle's "A Wrinkle in Time"? Or Alice, or Madeline, or Coraline? Or, frankly, a host of other long-loved favorites?

If your most treasured read hasn't been included here, don't shake your fist in the air and curse the gods at the injustice of it all: Blog about your own summer reading suggestions for kids on Open Salon (make sure to explain what makes them so great). Don't forget to tag your post "Building a bookworm." We'll be cross-posting your submissions on Salon in the coming weeks.

Books Building A Bookworm Our Picks