How the paper of record shook up Connecticut's U.S. Senate race with a bogus story 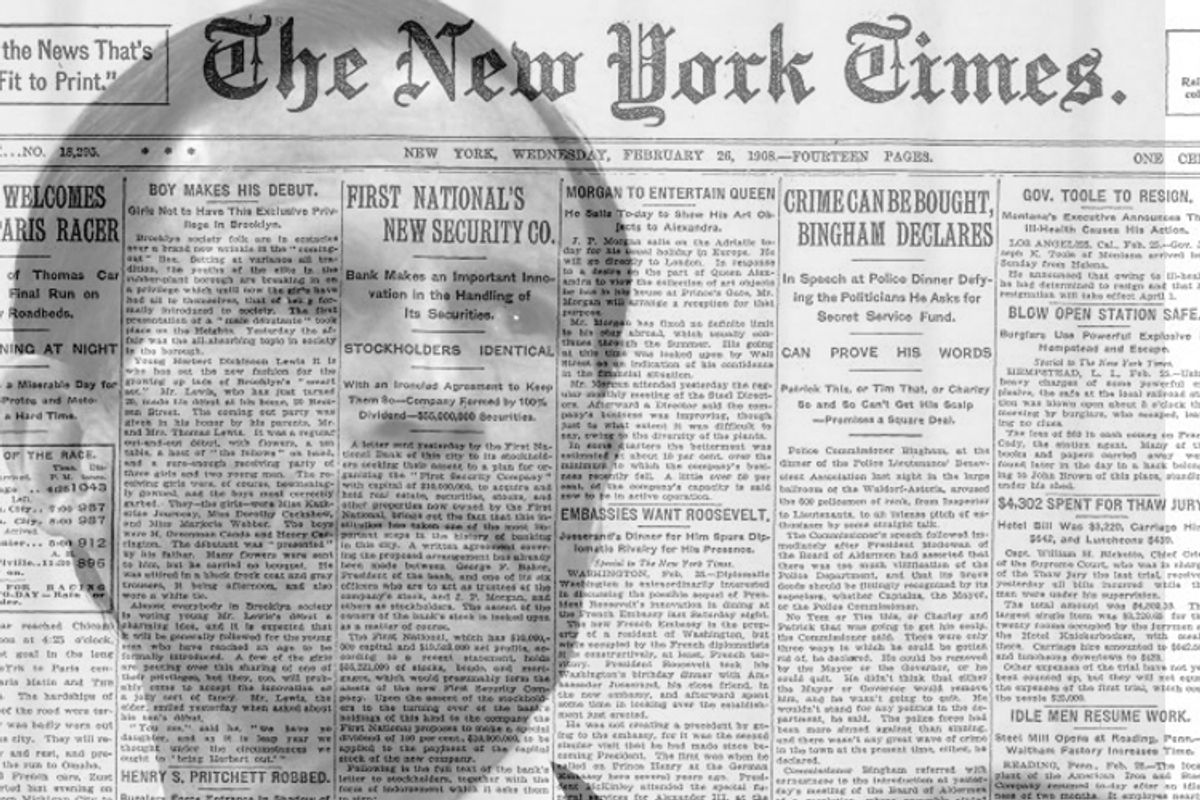 Everybody's known somebody who invented a make-believe biography. It's always funny, often sad, occasionally pathological. I once knew a fellow who got into a standoff with cops who wanted him to submit to a DUI test. His girlfriend stood in the driveway crying. Poor X, she lamented, was still suffering from post-Vietnam combat flashbacks.

Fed up with X's antics, I gently suggested she do the arithmetic. He'd been in junior high when the war ended in 1975.

Oh my God, indeed. At first glance, it appeared that the New York Times had uncovered just such an impostor in Connecticut attorney general and Democratic U.S. Senate nominee Richard Blumenthal. In a potentially career-destroying front-page article, Times reporter Raymond Hernandez charged the candidate with repeatedly falsifying his military record to persuade audiences that he served in Vietnam, although he did not.

A Marine reservist, Blumenthal did most of his six years' service in Washington and New Haven. In one instance, the Times had the candidate dead to rights. "We have learned something important since the days that I served in Vietnam," Blumenthal told a 2008 Memorial Day gathering. "And you [veterans] exemplify it. Whatever we think about the war, whatever we call it -- Afghanistan or Iraq -- we owe our military men and women unconditional support."

Acknowledging that he had "misspoken" on that occasion and possibly others -- although the Times documented just the one -- Blumenthal said he'd always meant to be "completely clear and accurate and straightforward, out of respect to the veterans who served in Vietnam."

Six paragraphs later, following a description of Blumenthal's draft deferments and enlistment, Hernandez wrote that "at other times, he has used more ambiguous language, but the impression left on audiences can be similar."

For example, in Shelton, Conn., in 2008, he spoke of the poor reception given returning soldiers. "I served during the Vietnam era," Blumenthal said. "I remember the taunts, the insults, sometimes even physical abuse."

Right there my personal buncombe detector started beeping. So the second-strongest evidence is two sentences that are literally true?

I hold no brief for Connecticut's ambitious attorney general, but from long experience with the New York Times' methods, I wondered what they were leaving out. Quite a bit, as it turned out.

See, journalists can get hung out to dry for reporting demonstrably false information. See: Miller, Judith. But the art of tactical omission can turn a relatively understandable overstatement like Blumenthal's into an indictment. Almost the entire "Whitewater" hoax worked that way. Correct the errors and fill in the blanks, and the "scandal" evaporated.

Back to l'affaire Blumenthal. Fully 23 paragraphs into the Times story, readers learn that during a televised Senate debate last March, Blumenthal was asked about possible war with Iran. "Although I did not serve in Vietnam," he said, "I have seen firsthand the effects of military action, and no one wants it to be the first resort." His campaign supplied the video.

Odd behavior for somebody systematically falsifying his record, no? Then there's Blumenthal's campaign website, which states simply that "he served in the U.S. Marine Corps Reserves, honorably discharged as sergeant." Detailed profiles have appeared in Connecticut newspapers over two decades, quoting Blumenthal and accurately summarizing his military experience. The Times mentions none of them.

Indeed, the Times article so surprised the Hartford Courant's Colin McEnroe that he polled 10 veteran Connecticut political reporters. All but one agreed with the Connecticut Mirror's Mark Pazniokas: "Every time he talked about his military record, he was quite clear that he had been a military reservist and never came close to suggesting he was in Vietnam."

One fellow, a photographer, recalled misstatements like the 2008 Norwalk example.

Ah, but in the paragraph immediately following the candidate's televised disclaimer of Vietnam service the Times tells us other "flattering but untrue" information has appeared in profiles about him. It cites two articles stating that he served as Harvard's swim captain, although "records at the college show that he was never on the team."

The obvious purpose was to imply that Blumenthal's a compulsive exaggerator. They were all over it on the Sunday talk shows. "This is a serial problem," pronounced George Will on "This Week." On his own program, Bill O'Reilly stated that Blumenthal can't even swim.

Problem is, the Times got that wrong, too. The Hartford Courant found Harvard's swim captain, who recalled Blumenthal as a talented freestyler. There's a photo of him competing against Princeton in the 1964 Harvard yearbook. Nobody knows who erroneously called him captain. Not him.

Blumenthal swam the 100-yard freestyle in 51.0, an excellent time.