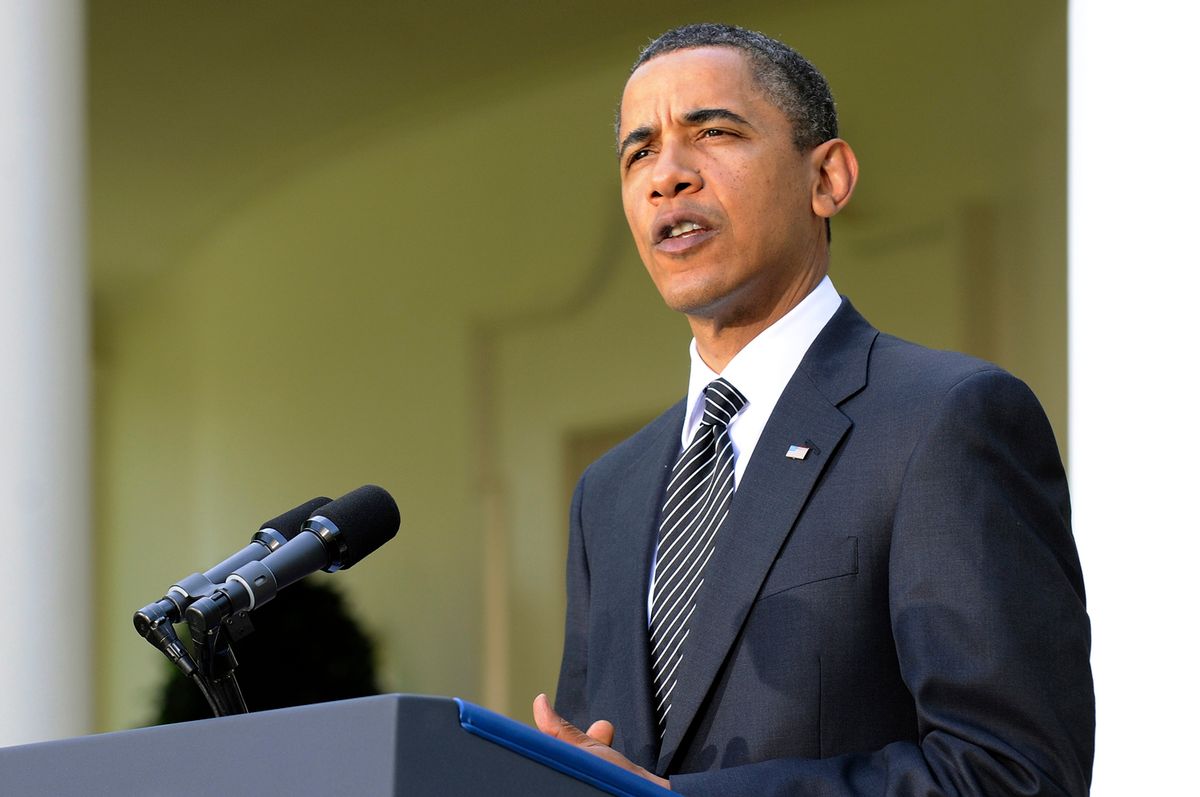 1:55 Oh, hooray, Major Garrett: Fox wants to ask about that "boot on the neck" line from Salazar. "Are you comfortable with that imagery, sir? Is your BOOT on the NECK of BP?" AND! What did you admin offer Joe Sestak? Thanks, Major. Important questions.

There will be an official response "shortly" on the Sestak issue that will hopefully answer Major Garrett's questions. (I DOUBT IT.) "Nothing improper took place."

As for the boot/neck thing, Obama feels bad if he hurt anyone's feelings with that language, I guess. We don't need language, we need ACTION.

Malia knocks on the door while President Obama is shaving and says, "did you plug the hole yet, daddy?" (Really?) Obama feels bad about the oil birds and dead turtles. Obama understands why people in Louisiana are upset. The Federal Government is constantly thinking about this. In case anybody wonders, "I take responsibility. It is my job to make sure that everything is done to shut this down."

1:45 Next Q: What will the National Guard be doing at the border, exactly? Would you support a boycott of Arizona? (I don't think the President can boycott state?) (Also apparently the Prez wanted to talk about immigration, instead of taking more oil questions.) "I'm the president of the United States. I don't endorse boycotts. Or not endorse boycotts." His admin is examining this law. Immigration is inherently the job of the federal government. And the federal government needs to step up. And! We need a comprehensive approach to immigration reform. "I am prepared to work with both parties, and members of congress," to get a bill that secures borders, holds companies accountable, and makes those who come here illegally get right by the law.

With respect to the National Guard: they will do lots of helpful stuff. But just sending more troops won't solve the problem. We need an orderly, fair immigration framework. And he told GOP: "I don't even need you to meet me halfway. Meet me a quarter of the way." And the president just explained that he can't pass bills with a simple majority in the Senate!

1:40 Next Q, from the New York Times: do you regret calling for expanded drilling? He continues to believe that we need to get oil here, in the US, where there is barely enough to meet ten minutes of our demand. "Where I was wrong was in my belief that the oil companies had their act together when it came to worst case scenarios."

Next Q: About Elizabeth Birnbaum. Obama found out about it this morning and insists he doesn't know the circumstances. At MMS, Salazar was "in the process of making these reforms, but obviously, they weren't happening fast enough."

On energy: the fact that oil companies have to go a mile underwater and then dig another three miles tells us something about how hard it is getting to get all the oil we need!

"That's part of the reason you never heard me say 'drill, baby, drill.' Because we can't drill our way out of the problem." All of the easy oil is gone. :( And, again, pushing the Lieberman/Kerry "American Power Act."

1:35 Helen Thomas! Her Q: When are we getting out of Afghanistan? (And don't give us the.. Bush-something about "them coming here.") Obama is now explaining the original justifications for the Afghanistan war. Oil continued to spill on the split-screen for a while, but then MSNBC switched it to Helen. "They absolutely are a threat to us."

1:30 Chip Reid Q: was Elizabeth Birnbaum fired? And MMS: Salazar blaming Bush admin for cozy relationship. And you blame Bush admin for cozy relationship! But you "continued to give permits." Is it fair to blame the Bush admin? Short answer: yes. (And Obama doesn't know about Birnbaum.) Next Q: can BP be trusted, because they keep always lying about everything? Prez says BP's interest is capping this stupid thing and minimizing the damage. But they are not aligned with the public interest in terms of being forthcoming. (So, short answer: no.) We have to "verify everything they say about the damage." And this is an area "where our efforts fell shot." Fed should've pushed to have the camera feed made public faster.

1:25 Q: "Why is it taking so long and did you REALLY act from day one as if this was a worst case scenario?" I don't understand the point of questions like this. Is the president going to say, "you know what, you got me, I didn't give a shit about this spill until that web cam went up."

Pre-deploying boom would've been the right thing to do. Now, Prez bringing up that IG report on MMS again. Salazar "cleaned a lot of that up" but more needs to be done. There was a "complacency" about the worst case scenario. How is it that oil companies kept getting environmental waivers? Because the waiver process was a joke. "What became the habit, pre-dating my administration," was just giving the waiver away. And: "domestic oil production is important." Ugh.

1:20 Chuck Todd! Q: The relationship between the government and BP. And: "Can you respond to all the Katrina comparison?" Obama will take that Q first. He will leave it to "you guys" to make judgments on that. Because he's too busy thinking really hard about solving the problem. So hard at work! (He's confident that people will look back and say that this admin was "on top" of an unprecedented crisis.)

One last stab at his five-minute answer to Chuck Todd's question: The problem isn't that BP is running around doing whatever it wants, but in something this big, mistakes will be made. He wants everyone to understand that WE ARE BOSSING BP AROUND. WE CONTROL THEM.

1:15 Q 2, from Jake Tapper: "You say that everything that could be done, is being done." But some people say that isn't true. Governor Jindal, for example, had an idea (that Obama already mentioned). Obama: If the question is, are we doing everything perfect? Then, no. But if the question is, are we evaluating every idea? Then the answer is yes. On Jindal's barrier island idea: they looked at it two weeks ago. The Army Corps of Engineers evaluated it. They are evaluating whether or not to take help from other countries based on many factors. Message still is: Grown-ups in charge, taking this seriously, constant urgency.

1:10: Disagreements between the Feds and BP: Top Kill. (We are still on his answer to the very first question, by the way.) There has never been a point during this crisis when this wasn't Obama's top priority. Mike Madden says: "These split-screen cable news shots usually drive me crazy, but the #oilspill gushing as Obama speaks actually seems appropriate." That's true! It's eerie and poetic and sad.

1:05 Question time: they understood from day one the enormity of the problem and they have been focused on stopping it. The government has always been in charge of making sure the response is "appropriate," but BP is the "responsible party," so they have to stop it and "mitigate the damage." They are doing so under the government's supervision, and they answer to Thad Allen. And! The Federal Government does not have better technology than BP! "Two or three days after this happened," Obama had a Situation Room meeting, and he was informed that BP had all the robots. Should the government have some robots? Probably, yes! (Maybe Lockheed Martin and Boeing should be making us oil leak-plugging robots instead of new and exciting death machines?) (Obama is not saying this, it is just my opinion.)

1:00 There are a number of ongoing investigations into the root causes of the disaster. And we're already on a "final note." We need clean, renewable sources of energy! Oh, good, he is finally using this disaster to push for passage of the climate bill. He closes: "This oil spill is an unprecedented disaster." "We are relying on every resource, and every idea, every expert, and every bit of technology, to work to stop it." Every day he sees this continue "I am angry, and frustrated as well." (That ought to please Chris Matthews! He said he is angry, it is official, the President is mad.)

12:55 Obama pressing his administration's active role in the response effort thus far. Also: Nobel-prize winning physicist Stephen Chu is on the case! 20,000 people in the region "are working around the clock." The National Guard. The Coast Guard. "More than 1,300 vessels." Numbers! I continue to think the biggest problem people have with the Obama administration's response is primarily a problem of "optics," to use a particularly despicable term.

Obama is now explaining that when he took office, MMS was incredibly corrupt. Scandalously close relationship between oil industry and regulators. More reforms are needed. As I said, the "optics" thing requires Obama to explain, to people who already know these things, what he has already done. We just need to hear it from him, I guess.

12:50 The conference has begun. We'll update this post as it goes on.

President Obama is about to hold his first real press conference since July 22, 2009. According to the press and the cable networks, it is the president's job to appear serious and mad. He will have to answer questions about this terrible oil spill. But mostly he will have to act in such a way that the media feels they have done their job putting his feet to the fire. Let's see how he does!